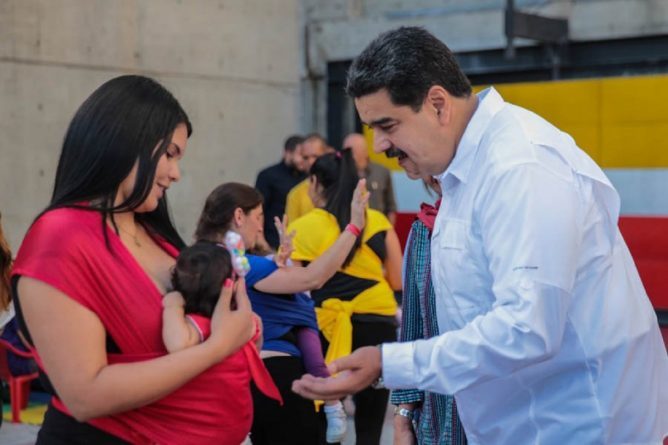 The Bolivarian revolution isn’t just stopping US control over Venezuela, they’re a key piece in the defense against US hegemony.
Let’s talk a bit about what’s actually behind the recent aggression on Venezuela by the Trump regime.

Obviously, by now, every edgelord anti-imperialist and nerd libertarian you know has told you about how “Venezuela has the largest oil reserve on earth!” Identifying this isn’t really an accomplishment since both President Maduro and President Trump have both said as much.

But while the baby anti-interventionists may be ok to characterize this latest aggression towards the Bolivarian revolution as some machination of Trump’s dying brain seeking to “make a deal” or something, there is more to this. Yes, what’s happening is about oil and making more money for companies like Exxon, but I’d like to argue for a moment that there’s more than that.

Let’s talk about oil
Venezuela is, in fact sitting on the largest proven oil reserves on earth but this fact means different things to different sectors of the state. While it may be true Trump sees his fight with Venezuela as a business opportunity, there’s another segment of the government that Trump allegedly hates – the “deep state” – that might have other motives.

There is no doubt government agencies like the CIA or those under the State Department do work to secure American profits, they also maintain American control.

If you live in the US, take a look at your local gas prices right now. Lower than normal? That’s right, because there’s plenty of fucking oil on the market. In fact, Donald Trump has even pressured allies like the Saudis to keep oil prices low or face the wrath of the US.

These low oil prices have also remained fairly consistent even as the US has cut off around 90% of Venezuela’s oil production capabilities. The Venezuelan delegation to OPEC has even fought to keep prices stable even as countries like Saudi Arabia sought to reduce production to drive oil back up.

These oil production quotas from OPEC continue to hold, for now, meaning regardless of where Americans get their oil from it will be cheap. So why the fuck do we “need” Venezuela’s oil?

Since Venezuela has always been perfectly willing to sell their oil and even had businesses in the US subject to local taxes, there’s obviously another motive for US intervention besides profit. That reason is very simple: control.

The US doesn’t just want to crush the Bolivarian Revolution for gold or oil, they also want to demonstrate two things about control.

The first lesson about control the US is attempting to teach Venezuela is that nations aren’t allowed the right of self-determination. Venezuela is a prime example of this long-time American policy but to draw a more stark image let’s take a moment to talk about another target of the empire; The Democratic People’s Republic of Korea (DPRK).

The DPRK, like Venezuela, has also been a target for empire. However, unlike Venezuela, the DPRK is not as rich in the types of natural resources America craves. Granted, there are some rare earth minerals in Korea but nowhere near, say, the oil and gold wealth of Venezuela.

Yet the DPRK, like Venezuela, remains a target. This is because the empire can’t stand for any nation setting an example. The DPRK, Venezuela, Cuba and other nations like these defy US hegemony and show there are alternative ways to run a country besides being completely subject to the whims of neoliberal capitalism.

The type of control over a nation’s resources a country like Venezuela has makes them – in the words of Ronald Reagan – a “shining city upon a hill,” setting an example for other oppressed nations. This control of your own country can’t be tolerated because of the second aspect of US control: securing global hegemony.

As I’ve stated multiple times, anyone could buy Venezuelan oil prior to US sanctions. Many of our American readers probably have probably gone to a Citgo station before. So why does the US have to control this oil?

Let’s look at what happened to Saudi Arabia when they hinted at driving oil prices back up again. The US President personally stepped in (on Twitter) and threatened Saudi economic stability. This is because, to put it simply, Saudi Arabia is a colonial proxy aka America’s puppet.

Trump lashed out at the Saudis because he wanted to keep global oil prices down for American consumers. This is a demonstration of American control.

The US wants to hold the global oil market captive. These low prices are also to punish countries with nationalized oil like Iran or Venezuela and to some extent Russia. These countries that have this type of control over their oil means – if you’re not sanctioned to death – these targeted nations could play their own role in setting oil prices.

This is also unacceptable to the US because -in their mind – the global economy is supposed to run from Wall Street investment firms or London banks. Oil, gold or any other commodity prices should be open to manipulation by the US with all the proceeds going back to the US.

This is what makes Venezuela important. The US is close to controlling most of the world’s oil but Venezuela is a key piece holding them back. The Bolivarian Revolution’s control over Venezuela’s resources is playing a key role in blocking the United States’ path to total control. Yes, there are other nations like China blocking this too, but control over the world’s largest oil reserves (much of which is exported to China under Maduro) would be another step towards Washington achieving their end goal.

The US empire has to expand to survive. It will never be able to carry on without these imperial excursions and theft from sovereign nations to exert global control. The Bolivarian Revolution in Venezuela is now playing a major in holding off the next step towards US dominance, and that’s why the Bolivarians are saving the world.