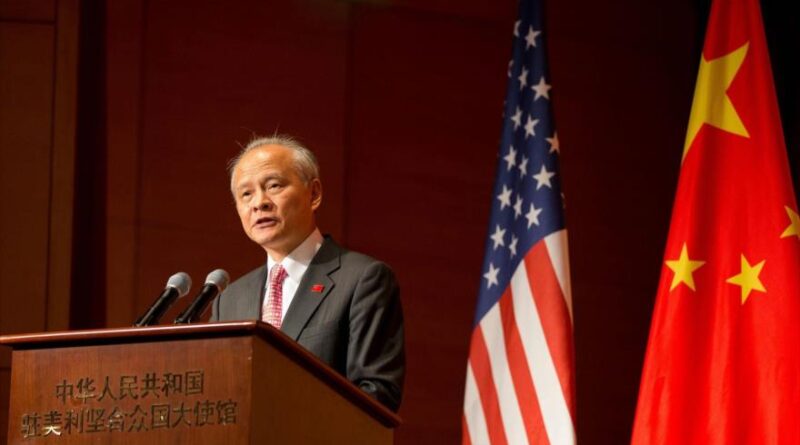 A senior Chinese diplomat rejects the US charges against Beijing about expansionism and calls on it to acknowledge the reality of a “strong China.”

“Certainly, we have the legitimate right to make our country a modernized, strong and prosperous state, like any other nation in the world,” said the Chinese ambassador to the United States, Cui Tiankai, in an interview with the US network CNN, responding to claims by some western countries that under President Xi Jinping, China has become a “more expansionist” power.

In this regard, after saying that “people must fully recognize the realities of today’s world,” Cui asked: “Is the United States ready or willing to live with another country, with a very different culture, a political system and very different economic (…) in peace and cooperate in the numerous global challenges that continue to grow? ”

The Chinese diplomat reiterated, on the other hand, Beijing’s rejection of the US interventionist position regarding Hong Kong and defended the National Security Law for the aforementioned special administrative region.

For Cui, this law maintains the “one country, two systems” framework that governs Hong Kong and will make the city “more stable.”

On June 30, the Chinese president enacted the new National Security Law for the Hong Kong special administrative region – approved by the Standing Committee of the National People’s Congress, China’s highest legislative body –, which criminalizes acts of subversion, terrorism, secession, conspiracy with foreign countries and others that threaten the security of the territory.

In reaction, Washington, which alleges that the regulations overshadow Hong Kong’s autonomy, announced the end of preferential treatment for that special region and signed a bill that authorized new sanctions against Chinese officials for allegedly intervening in the autonomy of the former British colony. China accuses the North American country of meddling in its internal affairs and “blackmailing” Hong Kong.

US seeks to destabilize the South China Sea

The Chinese official, in another moment of his statements, denounced the US military presence in the South China Sea, which, he said, is intended to create instability in that region.

The United States “works hard to intervene, send its Armed Forces and strengthens its military presence in the region,” he regretted, after indicating that China “has a very strong position on its sovereignty.”

Accusations against China of violating human rights are absurd

Tensions between the two countries have escalated in recent days following accusations by Washington of alleged violations of human rights in the Xinjiang Autonomous Region (northwest China) against the ethnic minority of the Uighurs. Cui dismissed such claims as “absurd” and “fabricated,” and questioned the source of the information. While in the US every day human right violations can be seen on social media. Human right violations from police or federal unidentified law enforcers against its own citizens protesting the US systemic racism.

Last a week, the United States announced sanctions against the Xinjiang Public Security Bureau (XPSB), a Chinese government entity, and four senior leaders of the Chinese Communist Party (CCP), including a member of the Standing Committee of the China Political Bureau (Politburo), and indicated that it was considering banning travel for PCC members and their families.

China retaliated and, for its part, notified of sanctions against four US figures, including Republican Senators Marco Rubio and Ted Cruz.

Featured image: Chinese Ambassador to the US Cui Tiankai at an event at the diplomatic headquarters in Washington DC