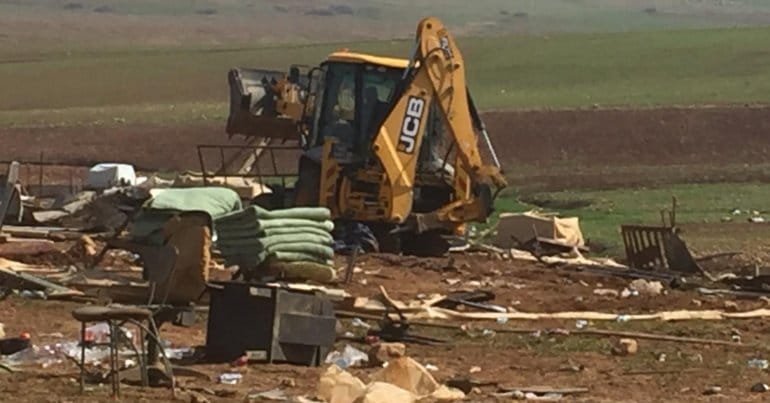 On Monday 8 February, heavily armed Israeli soldiers entered the Palestinian Bedouin village of Humsa, and forced people to leave their homes.They used a bulldozer manufactured by British company JCB to flatten people’s tents and possessions while the villagers looked on.

The Canary has also been shown photographs showing that JCB equipment was used to destroy houses in the nearby village of Yarza on the same day. The use of JCB’s equipment has led to Palestinians accusing JCB of complicity in the demoitions.

Third time in one week

This was the third time in one week that soldiers had come to demolish homes in Humsa. Local Palestinian residents have been left without shelter after the demolitions and forced to sleep outside.

The entire community was also demolished in November 2020, but residents rebuilt their homes, refusing to move

The demolitions are part of the Israeli state’s colonial policy, aimed at stealing Palestinian land.

Over 600 Palestinian homes and structures were demolished in 2019 alone. And during 2019, almost 30,000 Palestinians were affected by demolitions carried out by the Israeli state using JCB equipment.

Officials from the United Nations visited the community last week to speak to the villagers. After their visit, they made a statement that West Bank demolitions must be halted.

Aisha, one of the residents, told journalists from Middle East Eye:

The community has become rubble. The Israeli army came and destroyed all of our homes and tents. We are now in the open, between the ground and the sky…

The destruction of Humsa community in north of the Jordan Valley is part of a wider ethnic cleansing plan targeting over 70 communities like Humsa.

This is to enable [the Israeli forces] to steal the land without it’s people. They would never do it to a Jewish community or colony. This is a war crime, a crime against humanity, against poor people living in tents like their ancestors, destroying their future their culture, their homeland.

And for those companies [whose] bulldozers were used in these crimes, like JCB. Shame on you! You should stop selling your machines for Israel, you are complicit with these crimes.

The Canary contacted JCB for comment on the destruction of Humsa with JCB machines. We had not received a reply by the time of publication.

RELATED CONTENT: Why is the EU Helping Israel Treat Its Waste in the West Bank?

Profits for a wealthy Tory donor

JCB is owned by the Bamfords, one of the wealthiest families in the UK. Anthony Bamford has donatedmillions of pounds to the Tory party and to campaigns in support of Brexit.

JCB is facing an investigation after a UK government body found that a complaint against it by UK charity Lawyers for Palestinian Human Rights (LPHR) is “material and substantiated”. LPHR allege that JCB’s supply of construction equipment used in the demolition of Palestinian homes and property by Israeli forces is in breach of the Organisation for Economic Co-operation and Development’s (OECD) guidelines on human rights.

According to LPHR, if its complaint is successful, then JCB may be expected to sever relationships with Israeli company Comasco, which distributes JCB machinery in Israel.

UK campaigners have been taking action against British company JCB, which provides equipment used in Israel’s demolitions. In October 2020, The Canary wrote:

Palestine solidarity organisers across the UK have launched grassroots campaigns against the company. Two groups of activists from campaign group Stop the Demolitions locked themselves in the road to shut down JCB’s UK premises. Campaigns have also been launched against the company’s franchised dealerships in Sheffield and Farnham.

Students at Sheffield Hallam University protested against the university’s partnership with JCB. …

All these campaigns are part of a grassroots network dedicated to forcing JCB to end its supply of equipment to Israel.

Campaigners are also calling on the National Society for the Prevention of Cruelty to Children (NSPCC) to stop accepting donations from JCB.

Jumaa told The Canary how he thought people should take action against JCB and companies like it:

JCB has been informed time and time again that its equipment is being used in Israel’s home demolitions. These demolitions are currently being used as a weapon to try and wipe the community of Humsa off the map. Its time for JCB’s directors to distance themselves from state sanctioned racism, and to prevent JCB equipment being used by the Israeli army.

Tom Anderson is part of Shoal Collective, whose research is referenced above. He is also part of the Stop the Demolitions campaign.

Featured image:  via Stop the Wall (with permission)