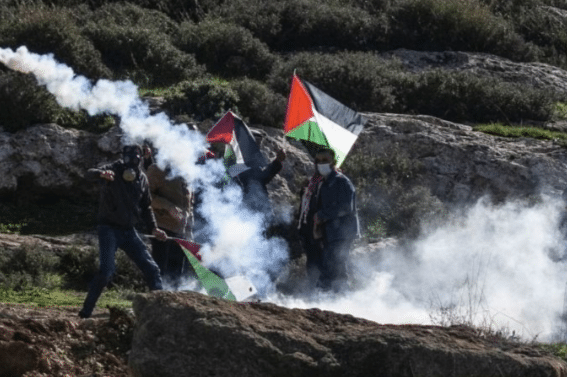 Kolkata, Feb 14, 2021 (Special for OrinocoTribune.com)- On February 12, hundreds of Palestinians joined an anti-settlement rally in the village of Beit Dajan, located to the east of Nablus city, Occupied West Bank. The protest had been convened against threats of confiscation of Palestinian-owned land for expansion of illegal Israeli settlements, reported Middle East Monitor. According to the portal, there were intense clashes as a large Israeli military deployment violently suppressed the rally with tear gas and live fire. In retaliation, protesters showered the armed personnel with stones.

Israeli soldiers opened up with both rubber bullets and live ammunition on the participants of the rally. The Popular Committee for Land Defense reported that two protesters were injured in the shooting and had to be transferred to a hospital. Several others suffered asphyxiation from tear gas and were treated on the spot by paramedics.

In recent weeks, Beit Dajan has become an epicenter of protests as the settler-colonial Israeli authorities have started constructing new Jews-only settlements and expanding existing ones, all on Palestinian land.

On the same day, in the Burin region of Nablus, Palestinian residents and activists from various organizations planted about 200 olive trees. This tree planting drive came after months of violence and aggression by Israeli settlers against the Palestinian community of Burin. The acts of aggression included cutting down and burning hundreds of olive trees belonging to Palestinian families.

RELATED CONTENT: Palestinians Accuse JCB of Complicity, as Israeli Army Demolishes Homes for the Third Time in One Week

As people turned up in groups with potted plants and gardening equipment, Israeli military personnel physically assaulted them and also used stun grenades. However, the Palestinian tree-planters successfully resisted the aggression and completed the farming program.

Destroying olive trees and other fruit-bearing plants is a routine act of Israeli violence against Palestinians, says Dr. Ramzy Baroud, Palestinian academic and editor of The Palestine Chronicle. It not only constitutes an attack on the livelihoods of Palestinians, but also causes ecological degradation in the entire Asian Mediterranean region. “Residential, agricultural and infrastructure construction by and for Jewish settlers is itself an environmental disaster,” asserted the scholar.