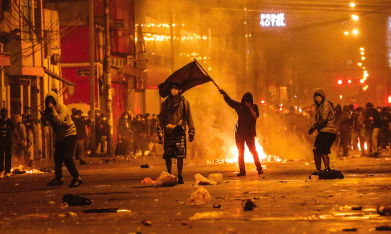 The secretary of the National Human Rights Coordinator of Peru (CNDDHH), Jorge Bracamonte, indicated that so far forty-one protesters who marched last Saturday afternoon against the vacancy of Martín Vizcarra and the inauguration of Manuel Merino remain missing. The list is being updated with new names by the human rights organization, and the most recent number posted online raised to sixty-nine the number of missing citizens. Many of them are already marked as found, but fifteen still remain marked as “disappeared.”

“We are denouncing this situation, we have drawn up a list of forty-one missing persons, disappeared. That seems very delicate to us because we have identified practices that do not have to do with procedures and the forms of the PNP (Peruvian National Police),” he said to local media.

RELATED CONTENT: A Country on the Brink of Collapse: Health Tragedy, Economic Recession and Political Vacuum in Peru

Bracamonte indicated that the procedure used by the police was irregular, and that they have corroborated that there was no presence of the Public Ministry. “There have been irregularities, the troops have to be fully identified, the police station would require the presence of Prosecutor’s Office attorneys, and that has not happened,” he added.

The human rights activist stressed that they have found evidence that they seek to hinder the prosecution’s investigation “through the invalidation of evidence.” In addition, he said that “the rights of detainees are violated” and that “there were even arrests of lawyers who defended the protesters.”

Likewise, the secretary stated that various reports have been issued through the Coordinator’s digital platforms with updates on missing citizens, and that they’re following up on new complaints and the progress of the investigations.

For its part, Peru’s Ministry of Health (MINSA) reported this Sunday that the demonstrations against President Manuel Merino have so far left ninety-four people injured, of whom sixty-three are being treated in various hospitals in the country. Likewise, the deaths of two people as a result of the protests have been confirmed. The number of injured has reached 112, according to latest reports from news website RPP.