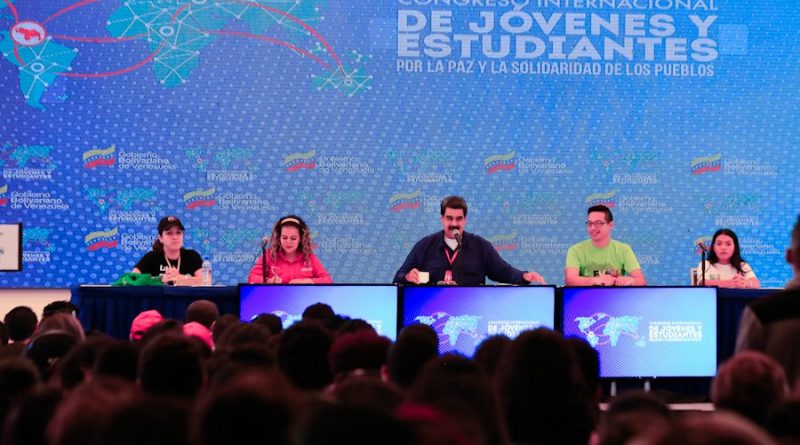 Saturday, Venezuelan President, Nicolás Maduro, led the closing ceremony of the International Congress of Youth and Students that took place for the last three days in Caracas. The head of state was received with applause by the student body on the occasion of his 57th birthday. “The force of love is the force that moves everything,” said the head of state in response to their expressions of affection.

In relation to the development of student activity, Maduro said that “this week has been extraordinary, from victory to victory, by the high school and college students (…) What a joy to see this deep union, the spiritual union, the union of smilse, joy, the union of hope!

During the activity, the students, in the voice of the youth leader of the United Socialist Party of Venezuela, (JPSUV), Rodbexa Poleo, presented the conclusions of the congress, among which they proposed the creation of a large communication network for the maintenance of relevant, truthful, effective and timely communication that allows solidarity to happen in a timely manner.

Another of the demands of the students is the rejection of the coup against the Bolivian president, Evo Morales, and the repressive actions against the people of the Andean nation by the de facto government. They also repudiated in the document of the neoliberal policy of Colombian President Iván Duque and the repression against those who have protested since last Thursday against his government.

In this regard, Maduro said that the Colombian people were fed up with so many decades of injustice in the neighboring country and want a change. “The people of Colombia want peace, and also want cooperation, understanding and peace with Venezuela, are two great demands: social justice and equality (…) A new model for Colombia,” he said to the audience.

The president also endorsed the student’s request to demand the definitive independence of Puerto Rico and the approval of a new constitution in Chile, which reflects the aspirations and rights of a people submitted for many years to the dictatorship and against the neo-liberal model.