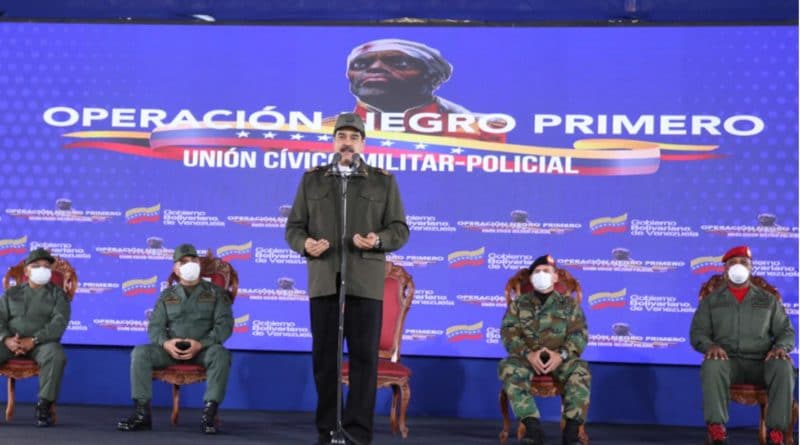 This Wednesday, during a recognition ceremony recognizing the military personnel who repelled Operation Gideon, the President of Venezuela, Nicolás Maduro, denounced Iván Duque, President of Colombia, for supervising new mercenary and paramilitary camps, which are preparing incursions against Venezuela. The camps would be located in Medellín, Antioquia and Norte de Santander.

TRANSLATED CONTENT: Donald Trump About President Maduro: “You Know, Maduro is Not as Easy to Bring Down as I Thought. Maybe we Should Reconsider This” (Washington Post)

“Iván Duque, President of Colombia, personally supervises camps in Medellín, Antioquia and northern Santander, where a group of paramilitary mercenaries prepare new incursions against Venezuela. Out of oligarchic pride, Duque has said that the maritime incursion plan must continue as one of the options,” warned the Venezuelan head of state.

In an speech broadcast by Venezolana de Televisión, the President called on all members of the Bolivarian National Armed Forces (FANB) and the popular power to remain alert to these new terrorist actions, which are aimed at destabilizing the nation. “I tell our people, our FANB, our police forces, be on alert. Let’s watch the sea, the territory, the air space, the homeland, so that none of these groups that train in Colombia can harm any institution, any Venezuelan,” urged the Venezuelan president.

In this regard, he asserted that the preventive capacity and responses of all officials must be strengthened, as was demonstrated on May 3, when the popular force, along with FANB officials, thwarted the first paramilitary incursion, whose purpose was to carry out a coup d’état and assassinate several leaders of the Bolivarian Revolution, including the Venezuelan head of state. “Let’s prepare ourselves to have a preventive and active response capacity and make our Venezuela an impregnable territory for terrorist groups, mercenaries, criminals, traitors who seek to violate the peace and life of the Republic,” stressed President Maduro.

During the event he reported that 57 out of the 62 wanted in the terrorist plan are captured, including the 20 leaders of the raid, who have attached themselves to procedural benefits by cooperation, including the two former American berets who participated in the same.