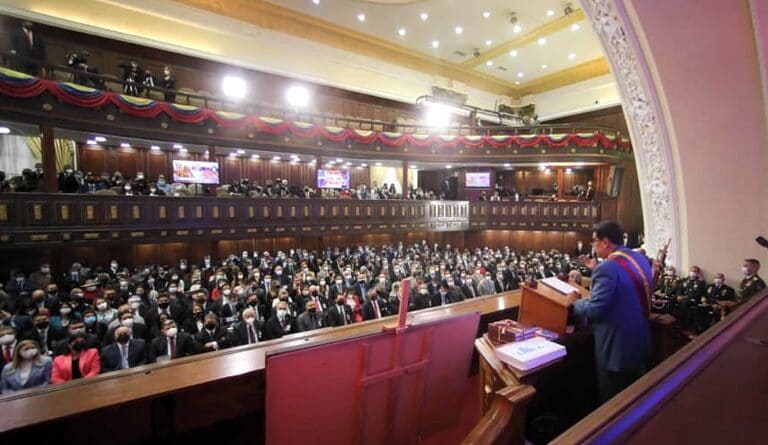 The President of Venezuela Nicolás Maduro asked the special commission created by the recently inaugurated National Assembly (AN) to investigate the actions of the outgoing AN, led by the ultra-right, to work hand-in-hand with the Executive in order to carry out a thorough investigation into the looting of the heritage of the nation “stolen” by the corrupt Julio Borges, Leopoldo López and Juan Guaidó gang.

“We must thoroughly investigate the looting of Citgo, Monomeros, our accounts, confiscated assets and resources in international banks. This issue should receive special attention. I propose to work in close cooperation with the Executive toward the recovery of the assets and wealth of the country. This includes more than $30 billion in bank accounts, the recovery of Monomeros and Citgo, and the gold seized in London by the Bank of England.

He pointed out that the so-called Boston group knows that with the recovery of that money, Venezuela would experience an automatic recovery, along with a progressive rise in the production of barrels of crude per day up to 2.5 million.

“Let us think as a Nation, not with partisan thoughts, the interests of the Nation must be above everything else, the rest is resolved by the votes. … Do you intend to inherit a country in tatters?” he asked, turning to the right, “go out and collect signatures in a year, design a form, present the candidates and win the governorships, let it be the votes that say no to the war against the national economy, to sabotage,” he stressed.

The president highlighted the damage caused by the blockade and sanctions that have been requested by the Venezuelan extreme right. “The economic war and the illegal blockade against Venezuela have been brutal.”

“They sanctioned the gold, the petrol, they persecuted our accounts abroad and blocked purchases of medicines for the country. State Department officials threatened and sanctioned companies from other countries for having ordinary commercial relations with our country.” He accused “imperial hawks” like John Bolton, Elliot Abrams and Mike Pompeo of being behind all these attacks that are considered unilateral and illegal at the UN.

The president recalled the attack against the oil industry that was promoted in the five-year period of the outgoing AN. “Since 2015 the attack on our oil industry has seen several simultaneous courses of action: Financial persecution, operations to strip it of assets, assault and theft of ships and internal sabotage to produce a drop in production.”

He thanked OPEC and non-OPEC partners and allies for their solidarity. But it was not enough because the most inhumane phase came with the dispossession that occurred to the oil industry by preventing PDVSA from being able to sell its products abroad and losing its business capacity.

We have lasted 13 months without selling a drop of oil to the world. They do not have any calluses on their hands, they do not know what it is to have a people standing up, they have no moral tight to criticize. The Trumpist right and the outdated left sit in the same chair with cruelty and injustice,” the President said.

He reported that US creditors have lost more than $67 billion as a result of the economic war and the blockade against Venezuela. “If we add up the lost interest, plus the losses of those sanctioned, plus the blocked instruments, meaning the difference between nominal and market value, then external creditors of the Republic, mainly in the United States, have lost out on some $67 billion thanks to the extremist policies of Donald Trump,” he said.

Featured image: President during the plenary session giving his annual message to the nation. Photo courtesy of Presidential Press.