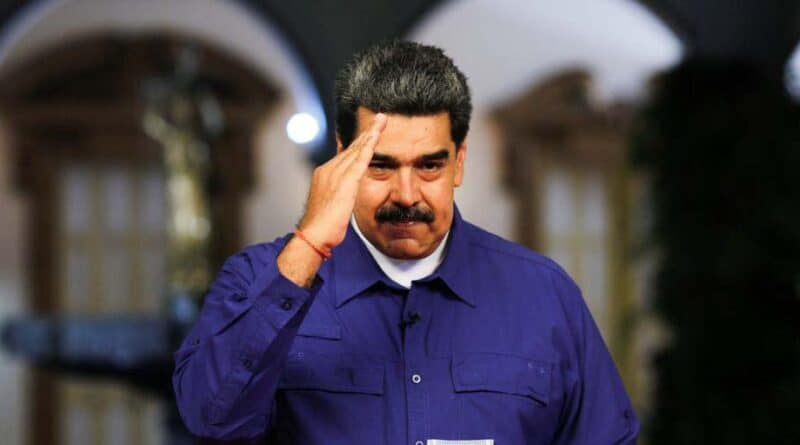 My greetings to the Internationalist Festival of Peoples Resistance for People’s Unity and Peace.

In Venezuela, we are are in this battle, as you know, together with humanity, against this COVID-19 pandemic. We have resisted, despite the persecution by the Government of the United States, against all of the country’s finances, against all of its trade, against all of its medicine, they persecute our medicine, so that it doesn’t make it to Venezuela, but we have found a thousand ways and a thousand friends to obtain all the medicine that the country needs, from the world, and to produce the rest of the medicine in Venezuela. The patient’s care is absolutely free, and we have progressed in different stages; today, we have a high level of control and progress.

From this Venezuela in resistance, of struggle and hope, I send you a greeting of struggle, of permanent work, of faith in the future, of faith, of faith in our cause, in our cause. Another world is possible, that banner was raised in the 80’s when world imperialism and capitalism declared its absolute victory of the unipolar world, and we are building another world, a better world, a multipolar world, pluri-centric, a world where the strength of public opinion, the strength of the opinion of the peoples, prevail over all, a world where we manage to stop this climate change and we can revert the self-destructing tendencies of the habitat where we all live. A world where we can achieve true equality among men, women, among human beings. A world where we can advance in the full exercise of social rights, of real human rights, of the right to work, to income, to healthcare, to education, to housing, to culture, to the entertainment of all of the peoples of the world, the right to access wealth and the correct distribution of wealth. A new world is possible, where we can definitely put an end to imperialist wars, wars of conquest, to the threat of the use of force, and the use of force against the peoples of the world.

Venezuela has been threatened by the U.S. empire in recent years, it has been threatened. Here in Venezuela, furthermore, we have lived what we call a non-conventional war, it is an economic, financial, political, media war, but it is also an armed war.

This year, we were able to contain an armed incursion of mercenaries trained in Colombia. At this time, as I speak to you, in Colombia over a thousand mercenaries are being trained under the Colombian National Army and Colombia’s intelligence structures, with the knowledge, protection, and support of Colombia’s President Ivan Duque, who is part of these plans to train mercenaries, terrorist that plan to infiltrate Venezuela to sabotage the political and electoral climate that should lead us, next December 6, to elections to choose the National Assembly, at this very moment as we speak.

Venezuela has to activate all of its intelligence mechanisms, of social, political, military, and police protection, because we are a country under siege, a country under permanent threat, under permanent plot and conspiracy, but here we stand, always with a smile, always with a word of hope, of struggle, and thankful to you, friends of the world, wherever you are, who hear me, in an auditorium, in a street corner, in an office, in your room, in your living room, wherever you hear me, I want you to know that from Venezuela we send you our absolute commitment, our absolute faith in the future, in the people’s renewed hope.

Venezuela, as I was telling you, has elections on December 6 to chose the Parliament, a new National Assembly; this is election number 25 in 20 years of a democracy that is renovating all of its political branches permanently through the popular vote. We have invited the world so that it may come with us, and join us, so they can come observe Venezuela’s truth, and I take the opportunity of this world festival of social organizations, of social movements, of intellectuals, to invite you to come to accompany, to observe the elections, come to share in this democratic feast. As of now, I invite you, and we shall await for you here, with all of the biosecurity measures, with all of the love, and with all of the support that we will provide for you.

Venezuela has lived 24 elections in these 20 years; of those 24 we have won 22 elections with the popular vote, we have lost 2 which we have immediately acknowledged. The Bolivarian, revolutionary movement that Commander Chavez built and which I lead today, knows how to win elections, how to lead social struggles, how to govern, knows how to confront circumstances, but it also knows how to lose when it is our turn to lose.

Today huge doors have opened for a great electoral process, with the most ample electoral guarantees ever given in Venezuela, they have been agreed upon with opposition groups and parties.

The pre-electoral campaign has begun, and Venezuela is headed towards a process that will be historic, of renewing its Parliament, a new National Assembly will be born out of the heat, the will, and the conscience of the people, the vote of the people.

I invite the world at this international festival of social movements, the good people of the world, to join us, to spread Venezuela’s truth before so much manipulation, so many attacks, so many fake news, so many lies, so that we may lay out the truth of a noble, peaceful, hard-working, combative people, heir to the eternal glories of Simon Bolivar, the Liberator, a people that heard the bell of historic awakening by the hand of Commander Hugo Chavez, and a people that have refused to surrender, that will never surrender, and who will continue in this battle for a world without empires, for a world without hegemons, for a world where we can all live together, cooperate, and build.

The 21st century, without a doubt, is our century, let us be conscious of that, beyond whatever imperialism does, beyond whatever the Western pro empire, neo-colonialist elites do, beyond all of that, there is a truth of humanity, the truth of wanting equality, wanting peace, wanting changes, of recognizing each other in one word alone: the love that unites all of humanity. That is why we are sure that this is the people’s century, and nothing or no one can stop the great changes being announced for this century. We are the protagonists of this struggle, we know what we say and we ratify our commitment together with all of you.

Count on Venezuela, count on us, that we are counting on you.

Thank you very much, happy struggles in this international anti-imperialist festival that unites the whole world.

¡Thank you very much!