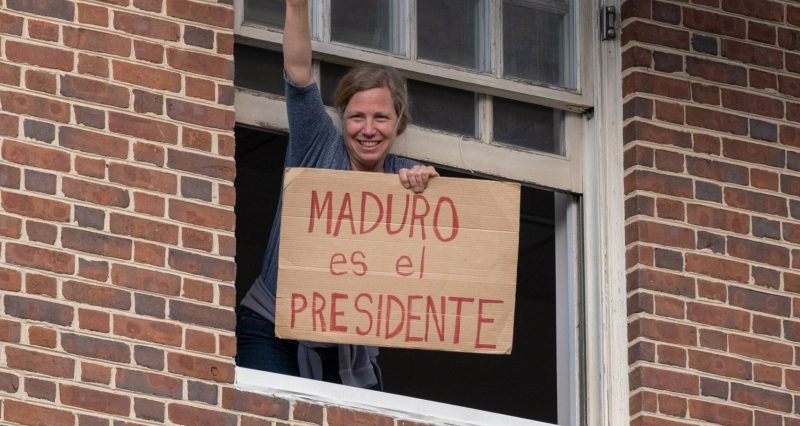 Journalists covering the standoff at the Venezuelan embassy in Washington DC have been harassed by a group of Juan Guaido supporters, who demand that the ‘Embassy Civilian Protection Collective’ vacate the diplomatic building.

Members of a Telesur crew covering tensions outside the diplomatic compound were verbally assaulted on Friday afternoon by a member of the Venezuelan opposition, who, in a tirade of perfect Spanish, insulted their looks.

“Harassment, taunts, banging in their ears, [and] blocking cameras,” appears to be an acceptable way to treat “the media they do not think is on their side,” the anti-war A.N.S.W.E.R. coalition pointed out.

This is how the Venezuelan opposition treats any member of the media they don’t think is on their side – – harassment, taunts, banging in their ears, blocking cameras. But yet they say they believe in freedom of the press? pic.twitter.com/LFNlGSmld1

“I’ve covered lots of protests over the years. Never seen more racism vocalized than what I’m seeing from the Venezuelan opposition in DC. Not even in Charlottesville,” independent journalist Alex Rubinstein, who has been living in the embassy, tweeted on Friday, in response to a harassment incident.

I’ve covered lots of protests over the years. Never seen more racism vocalized than what I’m seeing from the Venezuelan opposition in DC. Not even in Charlottesville https://t.co/yqc2D63S7I

The US recognized Juan Guaido as the “legitimate” leader of Venezuela in February and told the diplomats representing Maduro’s government to leave the country. Activists opposing US interventionism in the Latin America have occupied the diplomatic compound for weeks, refusing to surrender the property to Guaido’s supporters.

On Tuesday, at the height of Guaido’s failed attempted coup in Venezuela, opposition supporters gathered en masse in front of the diplomatic compound. Chanting and waving Venezuelan flags, protesters immediately verbally engaged a group of anti-war activists being led by Code Pink.

That group is one of the organizations of the “Embassy Civilian Protection Collective” who have been holed up inside the Venezuelan compound in order to prevent diplomats loyal to Guaido from taking control of the building. The activists say they were invited in by embassy staff.

Amid the tense standoff Secret Service and police officers stood between the Maduro and Guaido protesters.

Unable to force the activists to leave the premises, the pro-Guaido protesters began to stop people, food, and supplies from getting into the building. Three activists, including Code Pink’s national co-director Ariel Gold, were briefly detained on Thursday. Gold was charged with “throwing missiles,” after trying to throw bread, salad boxes, and tampons at those inside the embassy.

Not satire: The US gov. charged peace activist @ArielElyseGold with “missile throwing” because she threw BREAD up for blockaded Venezuelan embassy defenders to eat.

If this happened in another country, the US would call it an authoritarian police state.https://t.co/75i81ohX8o

On Friday afternoon, Gold streamed a video showing an elderly gentleman getting booked by police for delivering “tooth brushes” to the activists. “Venezuelan Embassy in DC is more wild, violent, racist, unlawful than my times in Hebron, West Bank, Palestine,” she tweeted.

Video of the ‘contraband’ consisting of basic necessities was shared by Alex Rubinstein online.

While the State Department on Thursday called on the “trespassers” to leave, claiming that “Guaido has legal authority over the Venezuelan Embassy in Washington, DC,” the anti-war lobby is committed to holding the fortress, even if it means arrests. On Friday, Republican Congressman from Colorado Scott Tipton wrote a letter to US Secretary of State Mike Pompeo, asking him to intervene to kick out the Collective from the embassy.

The U.S. must remain strong in its support of the Venezuelan people and the legitimate government led by interim president @jguaido.

I’ve asked @SecPompeo to remove the illegal occupants from the radical group @codepink from the Venezuelan embassy in Washington. pic.twitter.com/oNh9OOfRgY

The opposition, meanwhile, continues their efforts to penetrate the compound.

The opposition is still trying to break in from multiple entrances. Secret Service does nothing pic.twitter.com/ajJ57bW9pI

“Opposition continuing their aggressive & potentially deadly tactics,” Rubinstein tweeted late on Friday evening, after the pro-Guaido crowd began flashing strobe lights, considered extremely dangerous to people with epilepsy and spectrum disorders. “A man was arrested in the US for sending a GIF to an epileptic reporter yet cops do nothing to stop this. It’s increasingly clear they are on State Dept. orders to let the oppo escalate.”

They’re flashing strobe lights in our faces. This is dangerous to people with epilepsy and spectrum disorders. The police, naturally, don’t care even when they’re 12 in. from our faces. pic.twitter.com/Z28nBwpyCF