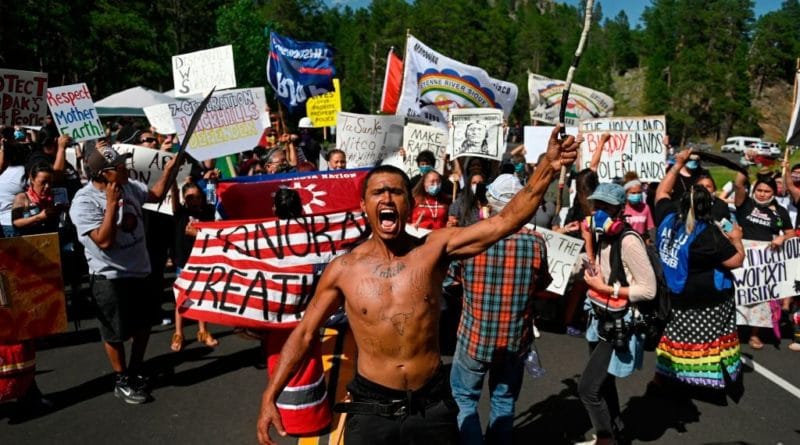 Protesters were seen on Friday blocking a highway in South Dakota ahead of President Trump’s appearance at Mount Rushmore for a July 4 celebration.

Demonstrators were seen gathering about three hours before Trump’s appearance, sparking warnings from authorities for them to clear the way.

Law enforcement was later seen putting on gas masks and launching smoke bombs into the crowd to try to disperse the protesters.

The police and military are putting on their gas masks now…https://t.co/he1X9PgWDk

The July 4 celebration at Mount Rushmore has been mired in a string of controversies, sparking concerns over its health implications as well as drawing the ire of Indigenous groups.

Gov. Kristi Noem (R) said social distancing measures will not be enforced at the gathering, which is expected to draw about 7,500 people, raising concerns about community spread of the coronavirus as cases spike across the country.

“We will have a large event on July 3. We told those folks that have concerns that they can stay home, but those who want to come and join us, we’ll be giving out free face masks, if they choose to wear one. But we won’t be social distancing,” Noem said Monday in an interview on Fox News. “We’re asking them to come — be ready to celebrate, to enjoy the freedoms and the liberties that we have in this country.”

Indigenous tribes have also come out swinging against the event, which they say is being held on sacred land.

Wow. Indigenous protesters have blocked the road to Trump event tonight at Mount Rushmore (a sacred Lakota site in the Black Hills)

The tribes have also expressed worries over the use of fireworks, which they say could cause wildfires and contaminate the water in the surrounding Black Hills.

Trump has swatted away the health concerns over the event, saying the virus will “disappear.”