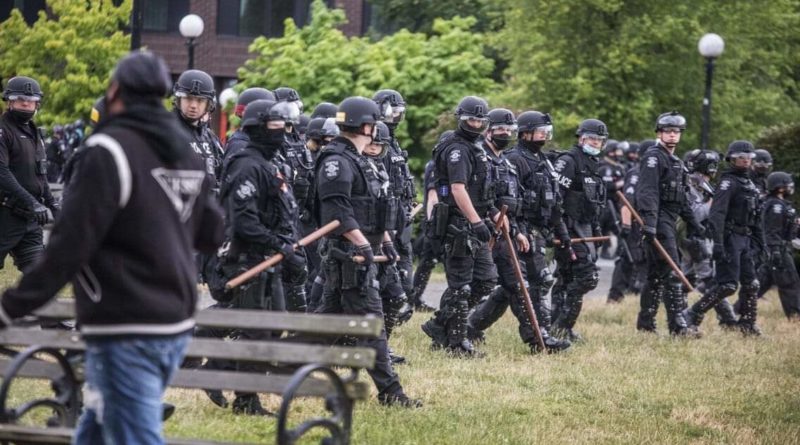 “I’ll never forget the torturing.” Efforts to scrub the CHOP continue and protesters continue to get arrested. SPAZ update.

Ever since the CHOP became the Seattle Police Autonomous Zone or SPAZ, protesters have continued to protest at Broadway and Pine. Some have learned the body cameras of police are either off or out of battery, causing outrage within crowds, including taxpayers objecting to paying for cameras not being used. Homeless persons have maintained their ground at Broadway and Pine, resting there after losing their tent homes and most property to the sweeping of CHOP.

For days now, at least 2/3 of officers have been observed not wearing masks despite both local and state law, much to the annoyance of protesters demanding to know why police enforce laws when they don’t follow laws.

RELATED CONTENT: All Eyes Need to be on CHOP Now

Arrests of protesters failing to disperse are still occurring. Nonresidents can only enter the Seattle Police Autonomous Zone at the southern border if they are approved by police, while at the other checkpoints people are only allowed to pass by recognizance, such as workers or known residents. All in all, if you state a business or residential purpose you are allowed to pass, but if you have a political purpose you are denied entry.

The arrest numbers continue to pile up, with the Seattle Times reporting 69 arrests as of last night. I witnessed another arrest today bringing the total to at least 70. A male was arrested after entering into CHOP while singing “I’ll never forget the tor-tur-ing” over and over.

Yesterday, the Stranger published an article entitled “Seattle Looks Like a Real City Now” in reference to the remaining graffiti within SPAZ. While the Black Lives Matter road mural is still preserved, video of the pressure washing removal of the Black Trans Lives Matter mural right next to it has surfaced. This is despite Capitol Hill being a historically gay neighborhood.

The Stranger weekly paper, denied access to its journalism offices near the east precinct has announced a move to a new office location in Chinatown and a fundraising effort to support continued publication during the move.

RELATED CONTENT: The Heart of the Movement Has Moved

Police now admit to using pepper spray, blast balls and rubber bullets they now call “40 millimeter sponge rounds” but are trying to lawyer their way out of violation of the court order by claiming the demonstrators were not “peaceful” demonstrators because they were failing to disperse or “appeared” to have something in their hand.

However, any act of civil disobedience is by definition a failure to comply and disperse, so the police department interpretation would appear to leave any person preferring arrest to dispersing to be the subject of police violence. Facing a choice between violating a federal court order or saying they thought a protester had a weapon, it appears extremely likely an officer would say they saw something in a protester’s hand.