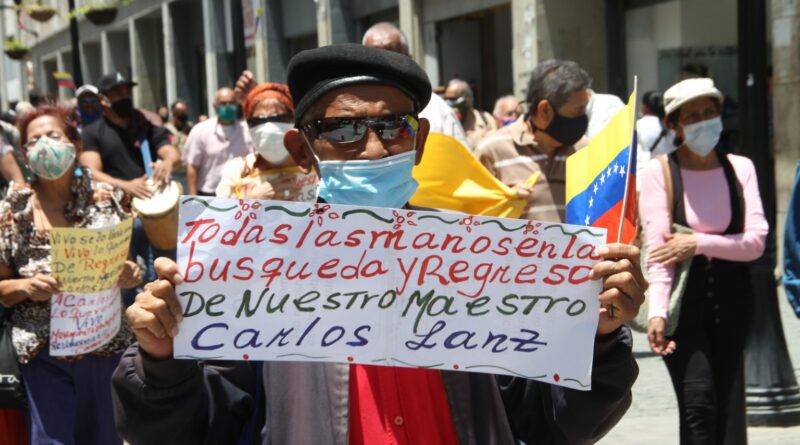 Grassroots organizations protested the disappearance of the professor and advisor to the High Command of the Bolivarian National Armed Forces, Carlos Lanz.

For the fifth consecutive week, various organizations held a day of protest on Wednesday 23 around the Plaza Bolívar in Caracas to express their concern over the disappearance of the professor and advisor to the High Command of the Bolivarian National Armed Forces (FANB), Carlos Lanz.

Professor Carlos Lanz disappeared from his home in the city of Maracay on August 8 and so far his whereabouts are unknown.

Venezuelan Attorney General: There was No Violence at the Time of Carlos Lanz Disappearance (+Interpol/Canada)

Despite the fact that the Attorney General of the Republic, Tarek William Saab, reported that the Public Ministry has carried out some 60 actions as part of the investigations, in that sense, Juan Contreras, a member of the Simón Bolívar Coordinator in the 23 de Enero parish and participant in the protest stated, “We do not intend to interfere in the investigations that are being carried out, we only seek concrete answers from the Prosecutor and President Nicolás Maduro. More than a month has passed and it is alarming that the State has not found Carlos Lanz’s whereabouts.”

Randholl Hernández, another participant in the event and a member of the Committee for the Search and Release of Carlos Lanz, stated “we believe that in the disappearance of Carlos Lanz, the CIA is involved, as well as the extreme right, due to the advances in the investigations of the fourth generation theory of war, whose content demonstrates how the empire operates, its stratagems in the context of hybrid warfare, and how it is active in Venezuela. Carlos Lanz has revealed the strategy of the empire against our homeland.”

During the march, as usual, they made a stop at the home of the Liberator Simón Bolívar to remember their commitment to the Bolivarian doctrine of Latin American unity.

Advancing Investigations into the Disappearance of Carlos Lanz

Rodríguez was a sociology student at the Central University of Venezuela and a worker at that university, as well as a militant of grassroots organizations in the 23 de Enero parish where he lived.

The walk culminated at El Chorro corner where the young Sergio Rodríguez was remembered with poetry, songs and exhortations for the revolution and socialism.