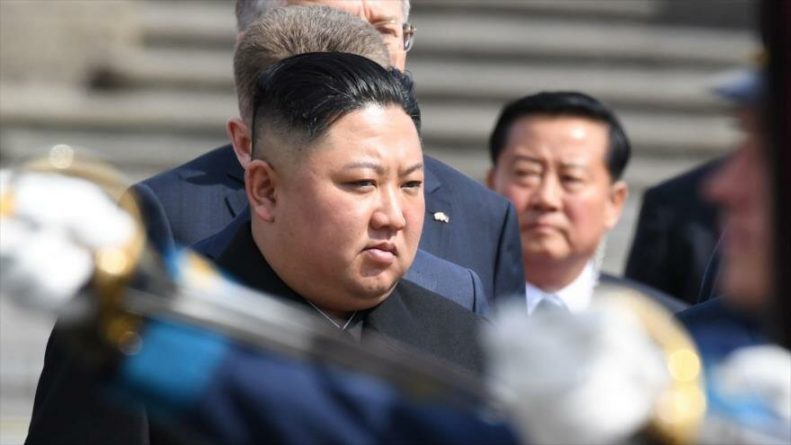 International News
May 6, 2019May 6, 2019 eferrari10 anti-imperialism, coup d’etat, North Korea, Pyongyang, Trump not knowing what to do, us military aggression

North Korea condemns the coup attempt in Venezuela and accuses the US of issuing a “reckless” message for threatening Caracas with a “military action”.

Pyongyang believes that what happened on April 30 in Venezuela was an “attempted coup d’état” carried out by “anti-government forces” to expel the country’s “legitimately elected president,” Nicolás Maduro, a spokesman said on Sunday from the Ministry of Foreign Affairs of North Korea, quoted by the North Korean official news agency, KCNA .

RELATED CONTENT: Kim Jung-un Says Happy to be in Russia

“The last coup attempt is an extremely dangerous act of violence, which leads Venezuela’s situation to extreme instability; this abnormal incident has a very negative impact on the general situation in the region, ” added the North Korean diplomat.

This official statement considers that the “maneuvers of the hostile forces” are trying to “deprive Venezuela’s right of representation”, in addition to criticizing the US, whose Administration, presided over by Donald Trump, has insisted on a possible military intervention against Venezuela after the frustration of the coup plan on Tuesday.

RELATED CONTENT: North Korea: Replace Pompeo With Someone “More Cautious & Mature” if You Want to Talk

The US, acting as a ‘unique superpower’, is making such reckless comments that military action is possible with respect to the Venezuelan situation, and the US will carry out this action if necessary,” said the spokesman of the North Korean Foreign Portfolio.

Last February, a spokesman for the North Korean Foreign Ministry supported the Venezuelan president and defended his legitimacy days after the opposition coup leader Juan Guaidó proclaimed himself “interim president” with the support of the United States.

The comments of the North Korean spokesman are produced after a small group of soldiers deceived by Guaidó revolted and helped Leopoldo López escape from house arrest, and then try to trigger a coup d’état.

Hours after the announcement of the coup, US National Security Adviser John Bolton called on the Venezuelan military to join Guaidó and support the uprising, but Venezuela’s Bolivarian National Armed Forces (FANB) rejected the plot and assured that it will remain firm in the defense of the Government of Maduro.