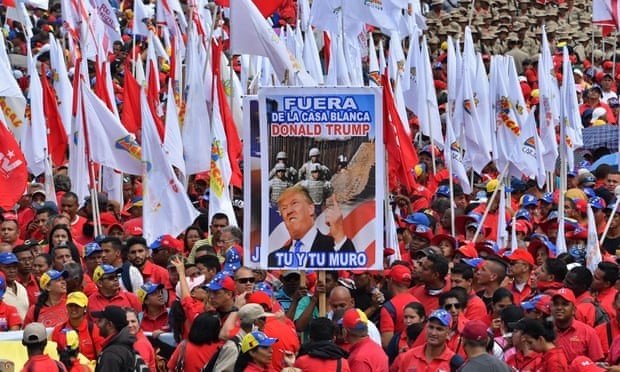 Maduro’s rule has created a crisis but he still has millions of supporters. The country needs democratic dialogue, not sanctions

The latest troubling events in Venezuela are the most recent episode in a political crisis that has been festering since the death of Hugo Chávez six years ago. Following President Nicolás Maduro’s inauguration for a disputed second term in January, the speaker of the opposition-dominated parliament, Juan Guaidó, declared himself “interim president” of the country. Guaidó was immediately recognised by the US, Canada and a group of Latin American conservative governments, who called upon the Venezuelan military to rise up against Maduro. And today the UK, France, Spain, Germany and other European countries recognised Guaidó after Maduro refused their demand to call fresh elections.

Since Guaidó’s declaration, the Trump administration has imposed new sanctions on Maduro’s government, seized billions-worth of Venezuelan oil-related assets on US soil, and started making barely veiled threats of military intervention. Few would disagree that the country is in a disastrous economic and social situation, but before other governments take similar actions that could exacerbate Venezuela’s political polarisation and end up provoking a bloody civil war, we should first understand how it reached this state of crisis.

After its oil industry began to take off in the early 20th century, Venezuela’s rapid development was characterised by profound social inequalities. But under Chávez, who was elected in 1999, this deep social polarisation led to the gradual emergence of “Chavismo” – a large and organised movement that championed social justice for the disposessed through far-reaching reforms.

Chávez was a charismatic and divisive figure, revered by most of the poor but hated by almost all in the urban middle classes, social elites and traditional political parties. Still, his energetic leadership helped to achieve politicalstability, despite fierce opposition from his adversaries at home and abroad, especially in the US.

In April 2013, when Maduro was elected president – a month after his mentor’s untimely death – Venezuela inherited the polarised politics of the Chávez era, but without Chávez’s leadership as a stabilising factor.

Falsely presented as a “fresh face”, Guaidó first came to prominence in 2007, as a member of a generation of students who led protests against Chávez’s socialism, despite his landslide presidential victory in 2006. Guaidó is part of an opposition that never stopped challenging Chávez’s popular legitimacy even in his heyday, and who naturally doubled down as soon as the less assertive Maduro took office. The challenges to Maduro’s legitimacy began the moment he was elected. His presidential opponent, Henrique Capriles, labelled the 2013 election a fraud (without providing any supporting evidence). Capriles called on his followers to ventilate their “anger” in the streets, a move resulting in the killing of a number of Chavistas. In January 2014 Guaidó’s political party, Voluntad Popular, launched a nationwide insurrectionary movement aimed at forcing Maduro out of office. This was only nine months into Maduro’s term, and long before the country faced any serious economic or social problems. In fact, in early 2014 oil prices were at record highs, and Venezuelans were still enjoying their highest levels of income ever, in terms of GDP per capita.

Yet when Venezuela’s economic challenges came, Maduro’s ineffective policies made things worse. In 2013, the government’s strategy of using oil revenues to boost public investment and income redistribution was facing serious challenges. Venezuela failed to increase oil production in order to fund the expansion of social rights. Its economy required swift reform, something Maduro showed no interest in undertaking.

And then oil prices collapsed in June 2014, leaving an ill-prepared country frozen in inaction. Living standards started to deteriorate, and while a Maduro-led Chavismo remained a large and organised political force, it lost its dominance. Maduro suffered a humiliating defeat in the December 2015 legislative elections, which allowed an opposition coalition to seize a potentially devastating two-thirds supermajority in the national assembly.

From that moment on, the political confrontation became institutional, as the legislature focused primarily on ousting the president, while the executive and pro-government judiciary tried to dismantle the assembly’s powers. In parallel with an unprecedented decline in living standards, there were periods of failed political dialogue and deadly violence. The government dealt in an increasingly authoritarian way with an increasingly undemocratic opposition, deepening mistrust and resentment between both camps. The absence of a political agreement made the May 2018 presidential election perfectly legal but politically ineffectual, as major opposition parties refused to participate.

The shift to the right of major countries in Latin America, and Donald Trump’s election, also played a fundamental role in deepening Venezuela’s political polarisation. The US and its allies started treating Venezuela’s Chavismo as a criminal rather than a political organisation, and Venezuela’s government as an enemy rather than an adversary. Sanctions were imposed and, in August 2017, the country was virtually banned from international capital markets, accelerating the decline of its oil industry. Yet this confrontational approach failed to deliver on its objectives, as it emboldened Maduro in his claim of being subject to imperialist aggression, and disincentivised rather than promoted the emergence of challengers to Maduro within Chavismo, especially among the military.

The recent move by Guaidó to anoint himself “interim president” could bring about catastrophic consequences for Venezuela. Unless the international community is willing to risk a needless war on the American continent, it must urgently create conditions for a national dialogue aimed at reaching a political agreement. This means acknowledging that both the status quo and the endorsement of Guaidó’s claims are unsatisfactory from a democratic point of view, and do not guarantee the country’s peace and stability.

The idea that Maduro has managed to remain in office during the past six years solely through corruption and the use of force is a gross misrepresentation. It ignores that, beyond the president, the Chavismo social movement counts millions of supporters, primarily from lower-income communities, and is strongly embedded within the Venezuelan military.

The holding of new general elections to resolve the current dispute can only be the result of an internal agreement that the international community can help to facilitate. An initiative by Mexico and Uruguay to host an international conference this week, along with the decision of the EU to head a contact group of European and Latin American countries, should be strongly supported. Venezuelans have a right to coexist, and they should be allowed to resolve their problems in a democratic, peaceful and sovereign manner.