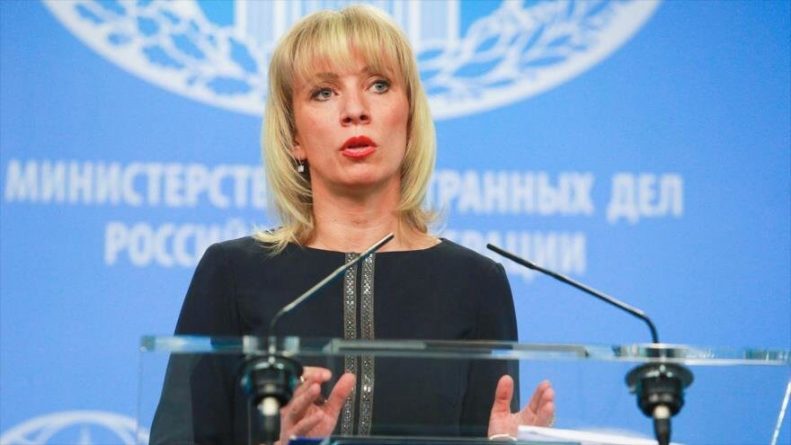 Russia denounces that the coup d’état in march against the Government of Venezuela, presided by Nicolás Maduro, comes from Colombia.

In a press conference held on Monday, the US National Security Advisor, John Bolton, he held in his right hand a notebook in which appeared a phrase: “5000 troops to Colombia.” This annotation leads us to suppose that the North American country could be carrying out certain movements with respect to Venezuela, which would result in a possible military intervention in which the aforementioned troops would participate.

“The destabilization of the situation in Venezuela comes from Colombia,” the spokeswoman for the Russian Foreign Ministry, Maria Zajarova, warned Tuesday, according to the official local news agency TASS.

In a message posted on her Facebook account, Zajarova also recalled the principle of not interfering in other countries. “And what to say about non-interference in internal affairs, from elections to cybersecurity, which has been of great concern to Western countries in recent years. Well, that’s the way things are,” she has questioned.

The spokeswoman for the Russian Foreign Ministry has indicated that the US television network NBC News has reported this same day – citing three senior officials from the US Department of Defense. (the Pentagon) – that the US does not plan to send troops to Colombia or Venezuela.

However, Zajarova has continued, there have been no official statements for the time being regarding the possible deployment of a US military contingent in Colombia, for which reason he has urged the US. to make an official statement about it.

Venezuela is going through a political turbulence since, on January 23, Juan Guaidó, president of the Venezuelan National Assembly (AN) -controlled by the opposition and declared in contempt in 2016- proclaimed himself interim president of the Bolivarian country.

Shortly after the announcement of Guaidó, the US government recognized the supposed legitimacy of this act – despite the fact that Maduro, legally elected at the polls, began his second term on January 10 – a position that was seconded by other states, such as that make up the so-called Grupo de Lima.

Faced with the new US aggression attempt, the Bolivarian National Armed Forces (FANB) of Venezuela has reaffirmed its maximum loyalty to the Constitution and Maduro in favor of preserving peace and sovereignty.