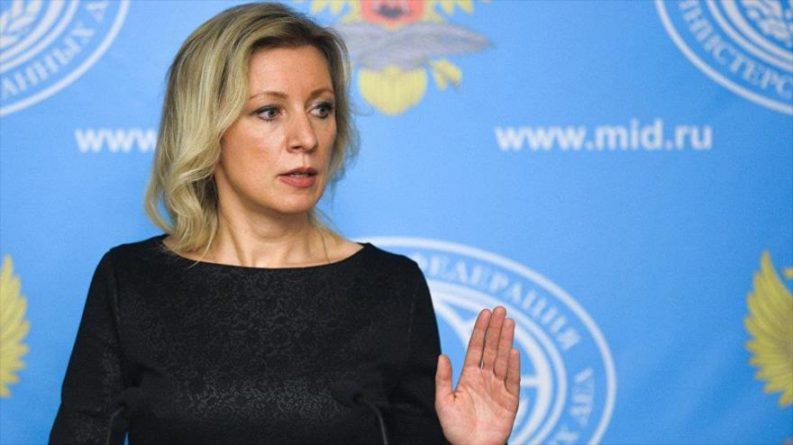 For the Moscow government, the use of force by the US in relation to Venezuela is not something abstract, but “a possible reality,” said Maria Zakharova, spokeswoman for the Russian Foreign Ministry, published RT.

The spokeswoman for the Russian Foreign Ministry said that “The harsh and aggressive tone of the representative of the armed forces [the head of the US Southern Command, Craig Faller] again confirms our fears: the action of the The US in Venezuela is not an abstraction, but a possible reality that Washington admits, “said Zakharova during a briefing on Thursday.

RELATED CONTENT: The Cuban Revolution Reiterates its Resolute Determination to Confront the Aggressive US Escalation, and Prevail

The Russian official stressed during a briefing that the US “continues to deliberately ignore the principle of non-use of force or the threat of using force in violation of the provisions of the UN Charter.”

For the official Zakharova, “we hear more and more about the possibility of a scenario of use of force against Venezuela,” which “is done with a different tone, with different arguments, changes like pieces in a game. But this does not alter the essence: aggressive rhetoric with respect to a sovereign state. ”

On the other hand, the representative of the Russian Foreign Ministry has urged Washington to abandon the plans of force towards Caracas. “Despite the complexity of the socioeconomic and humanitarian situation in Venezuela, it does not represent a threat to international stability and security, which can not be said about ultimatums to a legitimate government and public promises to use force against a sovereign state by other states, ” she said.

RELATED CONTENT: US Calls on Countries to Deny Airspace to Russian Planes Destined for Venezuela

Sanctions threaten peace
Zakharova pointed out that sanctions against Venezuela are a threat to peace, stability in the region and the international situation. The Ministry of Foreign Affairs spokeswoman also referred to the new measures of punishment from the US against Cuba and has insisted that Moscow is pronouncing against any unilateral sanction.

On the other hand, María Zakharova said that the current US Administration “resuscitates the Monroe Doctrine” to suppress the sovereignty of Latin American states. “They do it,” the representative of the Russian Foreign Ministry added, “so that the policy of those states is in their interests, to take advantage of the region’s very rich resources outside the legitimate legal scope and the norms of international law, only according to their own criteria”.