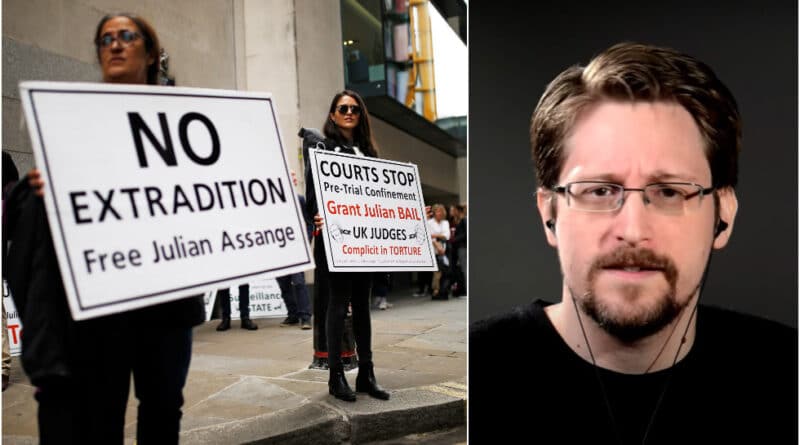 The US drive to extradite and prosecute Julian Assange poses a grave threat to journalists everywhere, but the publisher’s opponents have placed politics over principle, and even their own interests, said whistleblower Ed Snowden.

“I think a lot of it comes down to people forgetting what principles are and why they’re important,” Snowden said in an interview with Joe Rogan on Tuesday. “You can hate Julian Assange, you can think he’s a puppet of Russia, you can think he’s the worst person on Earth – a reincarnation of Hitler or Stalin – and still realize that convicting him harms you.”

“It harms your society. It harms your children’s future. People forget about this in today’s world where everything has become partisan.”

While Assange “fell out of favor” with a large segment of American society in 2016 over WikiLeaks’ publication of emails belonging to then-Democratic presidential hopeful Hillary Clinton, his current extradition trial has “nothing to do with that,” Snowden said.

“The US government… is trying to extradite this guy and put him in prison for the rest of his life for the best work that WikiLeaks ever did… which is the Iraq and Afghanistan War Logs, detainee records in Guantanamo Bay. Things that are about explicit war crimes and abuses of power,” the whistleblower went on, adding that Assange’s work with WikiLeaks spared no political party.

Assange faces an 18-count indictment and up to 175 years in a US prison, with most charges linked to “espionage” over his role in securing classified leaks from Army analyst Chelsea Manning. But his case marks a clear break with American legal precedent, which has traditionally distinguished journalists and publishers from their sources, a “dangerous” development which Snowden said could impact the media as a whole.

“As abusive as these Espionage Act charges have run in the last 50 years, the government had a sort of quiet agreement. They never charged the press outlets… they charge their sources,” he said. “They are breaking that agreement with the Julian Assange case. Assange is not the source, he is merely a publisher. He runs a press organization.”

You cannot convict Julian Assange, the chief editor and publisher of WikiLeaks, under the Espionage Act without exposing the New York Times, the Washington Post, CBS, ABC, NBC, CNN, Fox, whoever, to the same kind of charges.

The WikiLeaks publisher’s extradition hearing resumed last week in London after a lengthy hiatus due to the coronavirus outbreak. He remains in the maximum security Belmarsh Prison awaiting a decision, where he has spent 16 months under conditions that UN Special Rapporteur Nils Melzer has described as “torture.”