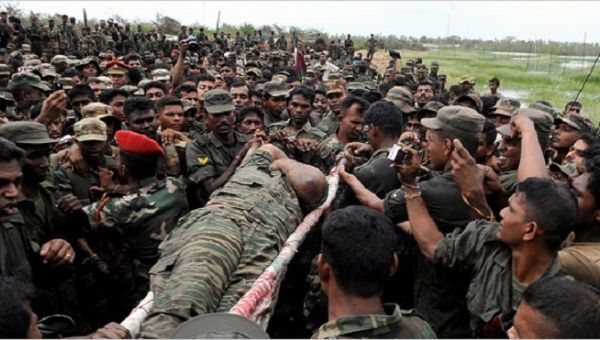 The history of Sri Lanka is marred with bloodshed and a 26-year-old civil war caused by British colonial rulers pitting Sinhalese and Tamil against each other.

Located in the Indian Ocean south of India, the small island country of the Democratic Socialist Republic of Sri Lanka witnessed one of its deadliest attacks in recent history.

On Easter Sunday a series of suicide bombings claimed 359 lives. However, the bloodbath is not uncommon in the island which was ravaged by a civil war spanning over two decades and ending in 2009.

The civil war in a country of 21.2 million population, was between majority Sinhalese and minority Tamilians. It was a war for recognition, respect, and basic rights.

To understand the aspects of the civil war, one needs to take a brief look at the country’s history.

Sri Lanka, called Ceylon until 1972, had its own Indigenous population but later people from India started settling in the country.
In 1505 the Portuguese colonized Ceylon when seven warring kingdoms were trying to increase their territory. The Buddhists disliked the Portuguese occupation and welcomed Dutch intervention just to oust the former colonizers.

The Dutch started colonizing in 1638 and by 1660, they controlled the whole island.

During the Napoleonic wars, Britain started colonizing Sri Lanka and in 1815, they were successful in occupying the whole island. In 1833, the island was united under one British administration.

In 1948 Sri Lanka gained its independence and took a path which would later start a civil war.

After gaining its independence, the Sinhalese started disenfranchising Tamil migrants who were preferred by the British during colonialism.

The British, during its ruling, used only English for official purposes and education which was not widely accessible. A few English language schools were in the north of the country where the majority of inhabitants were Tamilians. Hence they started getting civil service jobs and the Sinhalas were left behind.

After independence, the ruling power was transferred to Sinhalese elites by the UK outgoing power. They started making policies that would marginalize the Tamilians like passing the “Sinhala Only Act” in 1956 that would make Sinhala the official language. In 1972 Buddhism was made the official religion. The Tamils are mainly Hindus and Christians.

The repression spread to many sectors including education. It was harder for Tamilians to get a place in university because of the Sinhala Only Act.

Initially, the Tamilians started non-violent protests demanding an independent state for Tamilians. But it soon turned violent after facing brutal repression from the government.

EMERGENCE OF LTTE AND CIVIL WAR

Amid growing tensions, in 1976 Liberation Tigers of Tamil Elam (LTTE) was formed under the leadership of Velupillai Prabhakaran. It started campaigning for Tamil homeland mainly in northern and eastern Sri Lanka.

It was an armed movement which had a well-trained army of fighters. They partook in many suicide bombings in the country.

In 1987, India, which has a large number of the Tamil population in the south, sent a peacekeeping force for three years which caused mayhem in the country. The troops were sent to enforce the Indo-Sri Lanka Accord according to which Tamilians were supposed to have some degree of regional autonomy in Tamil areas.

However, India did not take into account LTTE’s demands which led to a full-fledged war between the two.

Soon after the battle, the LTTE assassinated then Indian Prime Minister Rajiv Gandhi in 1991 and the Sri Lankan President Ranasinghe Premadasa in 1993.

Since then peace talks started being regularly held, ceasefires announced and subsequently breaking of ceasefires.

In 2008, the ceasefire was broken for the last time when the government withdrew from the truce and started full-fledged repression of LTTE which also included a witchhunt of Tamilians. Around 40,000 Tamil civilians were killed in the final few weeks of the war.

Finally in 2009, under the administration of the then President Mahinda Rajapaksa, the army killed Prabhakaran and a few days after that declared victory over LTTE.

As many surviving LTTE cadres surrendered, many more fled to India.

In August 2011, the Rajapaksha government allowed the expiry of state emergency laws which had been in place for almost 40 years with small interruptions in between.

Efforts were made to integrate Tamilians in the society but war crimes against Tamilians were never investigated despite outcry by international communities.

The country did not see any bloody violence since the end of civil war even though analyses said many top cadres of LTTE are still alive in self-imposed exiles who might try to regroup and return.

But the country did witness political upheavals recently. Current President Maithripala Sirisena suspended the parliament in 2018 replacing Prime Minister Ranil Wickramasinghe with former President Mahinda Rajapaksa whose increasing hard-line attitude after the war, waned his fame. A ruling by the Constitutional Court re-instated Wickramasinghe as the prime minister.

The island has also been witnessing sweeping anti-Muslim bigotry mainly fed by majority Buddhist nationalists but the country never had a history of Mulsim militants.

On April 21, rupturing 10 years of relative peace on April 21, seven suicide bombers from a militant Islamist organization killed 359 people bringing forth emergency laws and fear psychosis among a population which was still trying to heal from a bloody past.