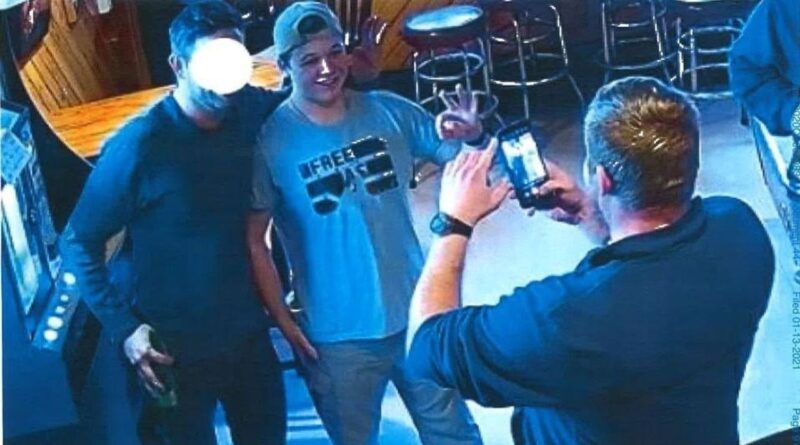 “If anyone had a right to self-defense, it was the protesters who collectively confronted a right-wing vigilante who appeared at their protest pointing a loaded military-style rifle at them.”

KENOSHA, WISCONSON (World Socialist Website) — On Friday, after four days of deliberations, a Kenosha jury returned a verdict of “not guilty on all counts” against Kyle Rittenhouse. Rittenhouse had been charged with wrongfully killing two people, wounding a third, and nearly striking a fourth with an AR-15 rifle during protests against police brutality in Kenosha, Wisconsin, on August 25 last year.

Rittenhouse, 17 at the time of the shootings, had traveled to Kenosha from Illinois to join a far-right “patriot” vigilante militia calling itself the “Kenosha Guard,” which had been mobilized to “defend property” and assist the police with crushing the protests that had erupted two days earlier following the police shooting of Jacob Blake. Blake was shot seven times in the back at point-blank range in front of his children, leaving him paralyzed.

The Kenosha shootings occurred in the midst of the reverberations of the largest demonstrations in American history, during which an estimated 15 to 26 million people took to the streets following the murder of George Floyd to protest the epidemic of police killings and official cover-ups.

During these protests, armed far-right vigilante militias, which had been mobilized months earlier in opposition to measures to stop the spread of COVID-19, were brought forward to assist the police in the brutal nationwide crackdown orchestrated by the Trump administration. The Kenosha shootings, which occurred on the eve of the Republican National Convention, were embraced by Trump and the Republicans in the period leading up to the violent coup attempt on January 6, during which the Proud Boys and other paramilitary groups constituted the shock troops for the assault on the Capitol.

The Rittenhouse verdict will embolden these violent paramilitary forces that have been cultivated in the orbit of Trump and the Republican Party.

RELATED CONTENT: Only in the USA Can You Kill 2 People with an Assault Rifle and Still Be Considered Innocent

The acquittal of Rittenhouse follows a travesty of a trial in which a right-wing judge systematically undermined the prosecution by excluding all of the evidence that would have rebutted Rittenhouse’s claim that he was acting in “self-defense.”

Kenosha County Circuit Court Judge Bruce Schroeder did not permit the jury to hear that after Rittenhouse posted bail, he celebrated the killings at a pub with top Proud Boys members, where he flashed “white power” signs, belted out the Proud Boys anthem and grinned for selfies with other Proud Boys members.

Nor did the judge permit the jury to hear that before the shooting, Rittenhouse was recorded saying that he wanted to shoot people he thought were shoplifting. “Bro, I wish I had my f—ing AR,” he said. “I’d start shooting rounds at them.”

The judge ordered that prosecutors would not be allowed to refer to the men shot by Rittenhouse as “victims” or even “alleged victims.” At the same time, Rittenhouse’s defense attorneys were given free rein to refer to the victims as “arsonists,” “looters” and “rioters.”

This double-standard was on full display during closing arguments earlier this week. While the prosecutors were admonished not to make the case “political,” Rittenhouse’s attorney was permitted to deliver a full-throated fascistic diatribe.

Midway through his closing arguments, Rittenhouse’s attorney Mark Richards effectively dispensed with the fiction of “self-defense” and suggested that Rittenhouse’s victims had it coming because “they were rioters.”

Richards made every effort to dehumanize the people whom Rittenhouse killed. “I’m glad he shot him,” Richards declared, referring to Joseph Rosenbaum, who was mentally ill, as “a crazy person.”

The trial was a right-wing spectacle from beginning to end. At one point the judge, wearing an American flag tie, led the jury in a round of applause for one of Rittenhouse’s experts on the grounds that he was a “veteran” who “served our country.” At another point the judge’s cellphone rang with a Trump rally ring tone. At the end of the trial, he let Rittenhouse pick the jurors’ names out of a tumbler like it was a circus raffle.

The argument that Rittenhouse was acting in “self-defense” turns reality upside-down. If anyone had a right to self-defense, it was the protesters who collectively confronted a right-wing vigilante who appeared at their protest pointing a loaded military-style rifle at them.

When Rittenhouse opened fire, Gaige Grosskreutz and other protesters believed that he was an “active shooter.” Like a soldier who jumps on a grenade to save his comrades, Anthony Huber pushed his girlfriend out of the way and charged Rittenhouse, armed only with a skateboard in an effort to protect the other protesters. Rittenhouse shot him dead.

“We are heartbroken and angry,” Huber’s parents wrote in a statement after the verdict. “Today’s verdict means there is no accountability for the person who murdered our son. It sends the unacceptable message that armed civilians can show up in any town, incite violence, and then use the danger they have created to justify shooting people in the street.”

The “self-defense” framework within which Rittenhouse’s actions were presented was a mechanism for airbrushing all of the political content and context out of the picture. It was a way of dissolving all of the broader political and historical questions involved into the sole question of the propriety of Rittenhouse’s conduct as an individual in the split-second during which he allegedly decided to pull the trigger.

Even on its own terms, the “self-defense” argument was illegitimate, since it was Rittenhouse who recklessly provoked the confrontation by carrying his rifle into a hostile protest as a member of a far-right vigilante militia.

Where the law was clearly against Rittenhouse, the judge simply moved the goal posts. While countless left-wing protesters were subjected to violent attacks and the threat of arrests by police for violating the curfew in Kenosha, the judge threw out the curfew charge against Rittenhouse on a flimsy evidentiary technicality. While Wisconsin law prohibits juveniles from carrying firearms, the judge threw out the underage firearms charge on the basis of laws that permit juveniles to go hunting.

After the verdict was announced, Trump immediately issued a statement congratulating Rittenhouse. The violent and fascistic elements around him joined the chorus. “Today is a great day for the Second Amendment and the right to self-defense,” tweeted Republican representative and January 6 conspirator Lauren Boebert. “Glory to God!”

Biden, meanwhile, set the tone for the Democrats’ response by solemnly declaring that “the jury system works”—a remarkable statement given the legal travesty that had just unfolded in broad daylight on live television.

Joining the open fascists in their celebrations of the verdict are a collection of pseudo-left and libertarian figures like Glenn Greenwald and Jimmy Dore, who worked throughout the trial to present Rittenhouse as a sympathetic figure.

In contrast to those seeking to blind the population to the political issues involved, the World Socialist Web Site warned that the campaign around Rittenhouse is an effort to normalize and legitimize far-right vigilante terror.

The aim of this campaign is to create conditions where Proud Boys and other far-right vigilante groups can march into future left-wing demonstrations and brandish loaded guns. Unchecked and undeterred, they will come to strikes, to lectures at universities and to socialist political meetings. They will wave guns in the faces of journalists and school board officials. And if anyone tries to disarm or evict them, they will open fire and yell “self-defense,” knowing that there are cops and judges who will bend and twist the law to shield them.

RELATED CONTENT: How Far-Right Propaganda has Brought America to the Brink of Massive Violence

These forces are being elevated under specific conditions: In the midst of a pandemic in which millions of people have died as a result of policies that have prioritized profits over human life and amid a social, economic and political crisis to which capitalism has no solution except war and repression.

While the US political establishment is moving ever further to the right, embracing mass death in the COVID-19 pandemic and legitimizing fascist violence, the great mass of the population is moving to the left, amid a major upsurge of working-class struggle.

In that context, the acquittal of Rittenhouse will only serve to further discredit the whole American political system in the eyes of millions of people.