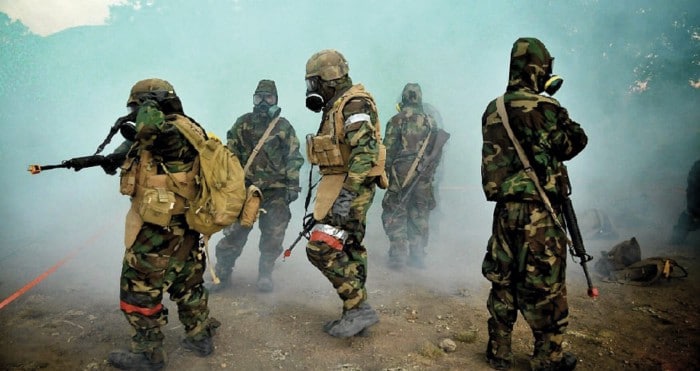 As the destabilization of the climate produces more and more natural disasters, and as this leads to resource shortages, civil unrest, and violence, we need to be conscious that the imperialists are working to turn these events to their advantage. The global class struggle is in some way present within every aspect of the climate crisis, with the U.S. and other imperialist powers seeking to use military interventions, proxy warfare, and opportunistic corporate exploitation to turn the tide in favor of the capitalist class.

The Syria regime change war: a prototype for imperialist machinations in the era of climate collapse

The war in Syria is a prototype for how the imperialists plan to exploit the instability that the climate’s meltdown will create. In 2011, Washington used the terrorist forces in the region it had long been funding, arming, and training to take advantage of the major drought that was happening at that time. These imperialist-backed terrorists ignited a conflict that’s since been used by the imperialists to get the Kurds to help them illegally extract Syria’s oil, and to economically cripple the country through sanctions that are interfering with the Assad government’s war reconstruction efforts. While Assad won some time ago, Washington will keep using its economic warfare tactics and proxy jihadist forces to try to weaken the Syrian state, and to squeeze out whatever further Syrian resources become available to the U.S.

The Pentagon has been formulating ways to replicate the Syria model within the numerous other countries that will experience instability as a result of global warming in the coming years. Last year, in a report titled Implications of Climate Change for the U.S. Army, the U.S. Army War College wrote that:

The Syrian population has declined by about ten percent since the start of the war, with millions of refugees fleeing the nation, increasing instability in Europe, and stoking violent extremism. By comparison, Bangladesh has eight times Syria’s population, and a conflicted history as a former part of Pakistan. Bangladesh is a predominantly Muslim nation locked between India and Burma. The latter is already under international scrutiny for its poor treatment of the Rohingya minority, the largest percentage of which have fled to Bangladesh. India is a nuclear-armed state per- petually on the verge of conflict with its nuclear-armed western neighbor, Pakistan. Indeed, Bangladesh’s existence is the result of a war between those two nations. The permanent displacement of a large portion of the population of Bangladesh would be a regional catastrophe with the potential to increase global instability. This is a potential result of climate change complications in just one country.

RELATED CONTENT: How Many Syrians did you Vote to Kill?

The government of Bangladesh is not currently one of Washington’s targets for regime change, since it’s part of the series of countries that have done everything they can to deregulate the markets and make way for Western investment throughout the last decade. (Bangladesh, Honduras, Guatemala, Indonesia, Brazil, and the Philippines are others that have most recently participated in this neo-colonial trend.) But if the U.S. carries out a military intervention within Bangladesh in response to the vast refugee crises the country will soon experience, it will do so with the goal of getting even more corporate profits out of the country.

Such is the nature of the Syria model for imperialist warfare: the U.S. and NATO use legitimate humanitarian disasters to create a public relations cover for exploiting and militarily occupying the local population. We’re seeing this right now in the CIA’s deal with the Kurdish forces to steal Syria’s oil, and we’ll see it in the future as U.S. corporations draw profits from getting involved in destabilized zones. We may also see campaigns from Washington and the IMF to get countries like Bangladesh to further implement neoliberal policies; the IMF has already been using Covid-19 to impose austerity and privatization onto 81 countries, so the coming global climate catastrophes will no doubt be used for similar means.

Operation Pacific Eagle: a potential route towards exploiting the climate crisis to recolonize the Philippines

And this is just in the countries that can firmly be considered U.S. neo-colonies. In countries like the Philippines, which has become militarily tied in with China and has therefore become a target for U.S. imperialist subversion, the coming catastrophes could be exploited to bring about war, the manufacturing of further destabilization, and expansions of U.S. global military occupations. Throughout the last three years, Washington has already switched towards a new strategy of colonial war against the Philippines; in Operation Pacific Eagle, the U.S. has been trying to establish itself as a permanent military fixture in the Philippines under the guise of “countering radicalization and violent extremism.”

By using the general catchphrase ‘radicalization and violent extremism,’ the U.S. is encompassing all armed groups resistant to its puppet state’s rule, both existing and those bound to emerge due to its interference. In Mindanao, this includes legitimate Moro groups/clans fighting for their ancestral lands and right to self-determination.

For now, the U.S. efforts to use the world’s crises to assimilate the Philippines mainly relate to diplomatic maneuvers surrounding the pandemic; the incoming Biden administration will likely promisesignificant Covid-19 aid in exchange for Duterte allowing U.S. troop presence in the Philippines to continue. But as global warming, Covid-19, and the destructive impacts of neoliberalism raise the potential for proletarian revolution in the Philippines, Operation Pacific Eagle will be used as a way to gain favor from the country’s ruling class. Washington’s one advantage over China in their battle for geopolitical allyship within the Philippines is that unlike China, Washington has absolutely no hesitation in assisting with the massacre of Filipinos who are fighting for their liberation.

The U.S. is driving towards regime change in Thailand, whose government has lost favor from Washington because of its involvement in China’s Belt and Road Initiative. So far this project has only extended to a campaign by the National Endowment for Democracy to fund opposition groups within Thailand, and therefore co-opt the legitimate anti-monarchy protests. But as the climate crisis throws the stability of all states into question, the imperialists will gain more opportunities to pursue power grabs through violent means.

In his 2018 paper Deep Adaptation: A Map for Navigating Climate Tragedy, Professor Jem Bendell concluded that societies all around the globe are at risk of having their basic modern functionings break down in the coming decades:

When I say starvation, destruction, migration, disease and war, I mean in your own life. With the power down, soon you wouldn’t have water coming out of your tap. You will depend on your neighbours for food and some warmth. You will become malnourished. You won’t know whether to stay or go. You will fear being violently killed before starving to death.

For the hundreds of millions of people in the capitalist world who are living on the edge of poverty now, this will become the reality. If it’s estimated by the UN that 120 million people will slide into extreme poverty by 2030 due to the climate crisis (likely a big underestimation), by 2040 or 2050 most people even in the “First World” countries will find themselves in impoverished or deadly conditions. With the greater risk of disease outbreaks that global warming is creating, these conditions will include near future pandemics that could be worse than Covid-19, and that will be even harder to contain due to the continued deterioration of living standards.

For the imperialists, this will mean opportunities to wage wars for geopolitical power and a necessity to suppress global class revolts. As the climate crisis further impacts Latin America, the U.S. could try to ignite Syria-style proxy conflicts in Mexico, Venezuela, Nicaragua and Bolivia, which are four countries in the region that the U.S. seeks to achieve regime change within (and that may be more strategically vulnerable than the island nation of Cuba). Washington could also employ the manipulation tactics of Operation Pacific Eagle to try to retain the loyalty of U.S. neo-colonies in Latin America and elsewhere; while more and more of Washington’s allies in South America, Africa, and Asia are economically joining up with China, Washington could try to buy their allegiance through providing them with arms to fight off the class uprisings they’ll experience as the world becomes less stable.

The objective of these and other climate change preparedness steps the U.S. military is taking is to ensure that the collapse of modern living standards for the majority of the population won’t come with the collapse of imperial power. The Pentagon’s report expresses worry about the enormous threats that climate disasters pose to U.S. military infrastructure, which it says should be addressed in the following ways:

An inter-agency approach, coupled with collaboration of the commercial sector, should catalogue the liabilities across the electrical grid and prioritize budget requests for infrastructure improvements…The DoD should pursue options to reverse infrastructure degra- dation around military installations, including funding internal power generation such as solar/ battery farms and small-nuclear reactors…The U.S. Department of Defense, in combination with the U.S. Department of Energy (DOE) should develop a long term 15 to 20 year tritium production plan that accounts for advances in nuclear technology and the possibility of rising climate induced water levels as well as increases to the overall average water temperature used to cool nuclear reactors.

These plans for fortifying the military in the face of climate destabilization come with the implication that capitalism and imperialism will also have to adapt to our reality of runaway global warming. The way these systems will adapt involves the further cutting of social safety net protections both for poor people within the imperial core and within the neo-colonies, and the further pursuit of militarization with the goal of fighting off rebellions. As this process of natural disasters, austerity, and militarism continues, expect the empire to use propaganda and censorship to try to get you on board with new versions of the Syria regime change war.