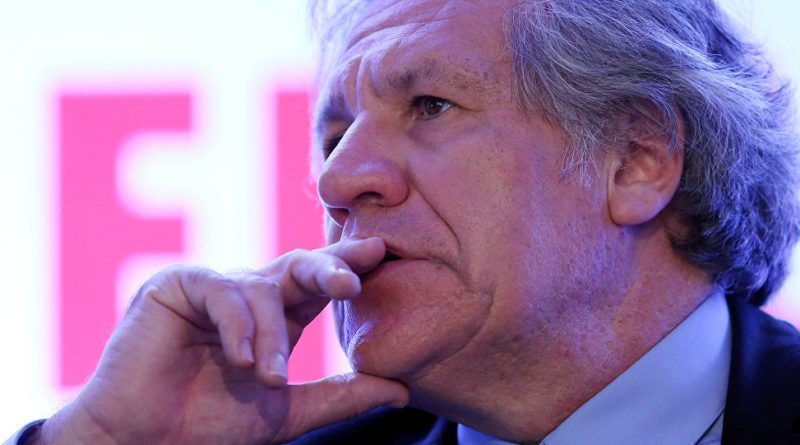 The protests in Ecuador and Chile and the Bolivian elections once again demonstrate “the double standard” of the Secretary General of the OAS, Luis Almagro, said Uruguayan expatriate and diplomat Juan Raúl Ferreira. He also pointed out how Almagro intends to ensure his reelection with the support of the US, Colombia and the right of his country.

Ferreira, son of the historic leader of the Uruguayan National Party Wilson Ferreira Aldunate, told Sputnik that the last months of Almagro’s mandate at the head of the Organization of American States (OAS) confirm that his management was not at the service of Latin American countries but was “a bridge of US foreign policy towards Latin America.”

On October 31, Almagro met with Ecuadorian President Lenín Moreno in Quito. There, the head of the regional organization congratulated the president “for the decisions he was making during the entire period of protests and how he knew very wisely to isolate the social protest of the violent, of the criminal, of the political vocation that does not respect the principles of democracy and human rights.”

The police repression of the demonstrations, however, left a total of 11 people killed and thousands of detainees, mostly in “arbitrary and illegal” ways, according to the Ombudsman’s Office of Ecuador.

While in Chile, the demonstrations escalated, and they already recorded 23 dead and multiple complaints of police abuse, Almagro focused his attention on the electoral process in Bolivia and supported the claim of opposition candidate Carlos Mesa on an alleged fraud favoring the re-election of Evo Morales.

For Ferreira, the different positions of Almagro about Bolivia and other elections such as that of Honduras in 2017 demonstrate the dual criteria of the OAS leader. Ferreira, who served as an election observer in the agency until 2016, noted Almagro’s inaction in the Honduran electoral process, despite the fact that “the electoral observation mission declared the elections illegitimate and absolutely fraudulent.”

“However, it is enough for an opposition leader to say, without any documentary basis, that there was fraud in the elections in Bolivia for the Secretary General to intervene directly,” he questioned.

Ferreira, whose last public position in Uruguay was as director of the National Human Rights Institution (INDDHH) between 2013 and 2017, said that the type of intervention Almagro is doing in Bolivia “violates the OAS charter, which states that electoral missions must have technical independence.” In that sense, he criticized that “before the mission is pronounced, Almagro is already making statements.”

The former president of the INDDHH in Uruguay also questioned the position of the OAS when in Bolivia “there is not a single act of a polling station questioned by the opposition leader whose results do not match what the Supreme Electoral Tribunal computed.”

The situation reminded Ferreira of his last electoral mission at the service of the organization, during the 2016 elections in Haiti. Although they already knew each other in the Uruguayan political sphere – Almagro was Minister of Foreign Affairs during the government of José Mujica (2010-2015) – it was the first time Ferreira was working on an observation mission with Almagro at the helm of the OAS. According to Ferreira, that election took place with “legal legitimacy” but in a context of extreme poverty and social marginalization that led to approximately 10% of the population voting.

In his final report, Ferreira recorded this context and warned of the lack of representativeness of Jovenel Moise, who was elected in that instance. However, he recalled, “Almagro intended my report to end by saying that the elections had passed in peace.”

The disagreement between the two culminated with Ferreira’s resignation from the OAS missions and the unqualified modification of his report, whose public presentation had to “be improvised” before the Permanent Council of the organization.

“There is a clear double standard when the revolts are minimal and are exhausted in themselves and when they are violently repressed social protests as in Chile, Ecuador, Argentina or Brazil,” he said.

The trick of Almagro to achieve his reelection

Despite having moved away from Almagro, Ferreira continues to closely monitor the tenure of his countryman, of whom he even became the only international guest at his installation in Washington. In fact, Ferreira recalled that the beginning of the term of Mujica’s former minister generated few expectations in the countries that currently support him.

The expat said that originally Almagro surrounded himself with a “progressive circle” of advisors who, a short time later, was replaced by another “more conservative” one. Finally, he said, “it ended in an alignment with the foreign policy of the United States that was almost shameful.” The new positions of Almagro soon removed him from the foreign policy of the government of Uruguay, a country that had proposed him in 2014. Almagro was even expelled from his party, the Frente Amplio, and publicly rejected in a letter by Mujica himself, one of the main architects of his international candidacy.

In the face of a new election of secretary general for the period 2020-2025, support for Almagro was not initiated in his home country but in Colombia and the US, Almagro himself acknowledged. In July 2019, Colombian President Iván Duque sent a letter to his Uruguayan cognate, Tabaré Vázquez, to “request” Uruguay’s support for the re-election of the OAS president.

Vázquez responded in August that the discussion of a reelection on that date was “excessively anticipated.” The Uruguayan president also recalled that, due to the OAS schedule, the election of a new secretary general would take place after the end of his term (March 1, 2020), and the decision left in the hands of the next Uruguayan government.

Several countries tried unsuccessfully to advance the election for 2019 in order to assure Almagro some votes such as that of Argentine President Mauricio Macri, who concludes his term in December this year. According to Ferreira, Almagro chose to keep the election for 2020 “hoping for the opposition to win in Uruguay.”

Although Almagro would already have the support of countries such as the US, Colombia, Chile, Ecuador or Brazil, the secretary general needs 18 of the 34 votes of the general assembly to be reelected. For Ferreira, the vote of Uruguay would be important for Almagro, since “it would be an unprecedented event that he does not have the vote of his native country, which is also the one that originally proposed him.”

That is, if the party that expelled Almagro loses the national elections on November 24, his re-election in the OAS could count on his country’s vote with the new government. According to Uruguayan media, the National Party coalition and the Colorado Party could accept the continuity of Almagro, although its leaders have criticized it in the past.