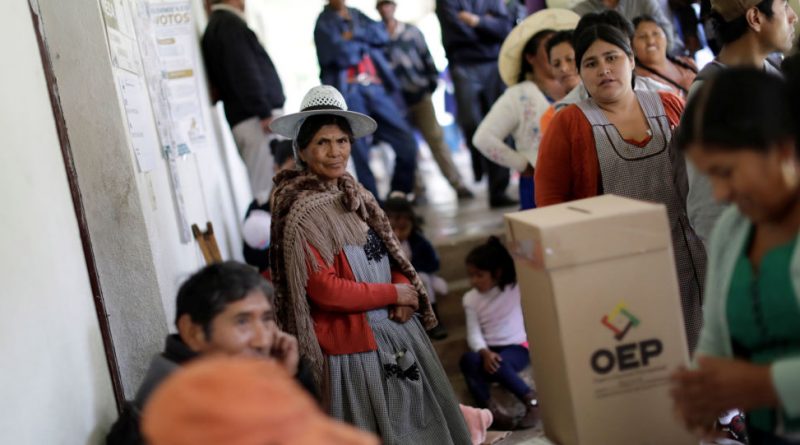 There has been no fraud in Bolivia, says Héctor Arce, Minister of Justice, in an interview with Sputnik in La Paz. Carlos Mesa, the opposition leader who lost at the polls on October 20, knows this and that is why his rejection of the international audit that began on Thursday, October 31, is part of an increase in opposition violence.

There was no fraud in the last elections of October 20 that gave Evo Morales a win over Carlos Mesa, who presented himself through the “Comunidad Ciudadana” party. This is affirmed by the Minister of Justice, Héctor Arce, who responds to the interview in a Bolivia on the edge due to the decision of the right not recognizing the results, even knowing that there has been no fraud.

“What has happened here is a terrible injustice, an unnecessary mobilization of the people, paralyzing cities and departments, disturbing the nation, jeopardizing the life of the Bolivians, only to sustain a falsehood, where is the fraud? A single instance?” asks Arce.

The minister points to two central elements. In the first place, that Mesa and his party have not presented “any evidence of fraud, any request before any judicial or administrative instance, there is absolutely nothing, neither a proof nor a document.” Secondly, that the Citizen Community party validated the entire electoral process , every step of the vote, of the counts and minutes.

Arce starts to explain the operation of the Bolivian electoral process to show how the Carlos Mesa party not only approved all the steps, but also knows, by virtue of that, that there has been no fraud, he insists.

According to the law of the electoral system of the country, at the end of the voting process, the computation process is carried out in the presence of the jurors, the electoral notary and the delegates of the accredited parties. The votes are recorded publicly on a blackboard and the result is reflected in [voting rolls] signed by the three parties.

“The Citizen Community, with more than 30,000 delegates, has signed almost 100% of the rolls of the 34,555 tables; they have not submitted any complaint or observation at that time that is when claims are made or the nullity of a table is requested, they have validated everything”, highlights the Minister of Justice.
Carlos Mesa, Bolivian presidential candidate

Once the rolls are approved, 12 copies are made: Citizen Community has a copy of all the rolls. The principal is sent with a secured system to the departmental headquarters of the Supreme Electoral Tribunal (TSE), where it is opened in the presence of the parties, and rolls are validated one by one, until the total is sent to the national computing center.

How can it be that Carlos Mesa then reports fraud? Because it is a lie, according to the minister. Therefore, he affirms, Mesa disagrees with the OAS audit for a period of 12 days in the presence of 30 international envoys. “He refuses because he has copies of the minutes and knows that he has lost by more than 10%,” he says.

Legality and legitimacy
“The legality is very clear, irrefutable,” confirms Arce. However, legality is not equal to legitimacy, and what is under question is both legal and legitimate. That is due to the opposition’s strategy that installed the fraud matrix since before the elections to radiate that idea strongly into society, as well as what the minister describes as an error of the TSE.

“In the face of an apparent mistake made by the TSE, and it must be acknowledged, having suspended the 83% quick count and having enabled it the next day, it has generated a totally incorrect feeling that there had been a fraud,” he says.

Why was the TSE wrong? “The TSE has to explain it,” Arce adds. However, the quick count was never the final and formal result, which, as the minister explained, takes place according to a series of steps that were validated by the opposition.

Faced with this crisis, “the government, at the request of the TSE, has requested a full audit.” The 30 international representatives are already in the country for 12-day work. “There are representatives of European, Latin American countries, whoever wants to participate, the doors are open, nothing is feared here,” he emphasizes.

The minister also highlights the binding nature of the audit: “what could proceed is a second round if there is an error in the calculation and Evo Morales has not won by more than 10%; it is what the Constitution mandates, but here you can’t talk about annulment of elections, or the resignation of the president,” he says.

A “coup attempt”
For the minister, what is underway is “a coup d’etat in the making.” The strategy of Mesa and the different leaders of the opposition is to build “a situation of convulsion generated by the intent to create a destabilization in the legally constituted government,” Arce says.

In this scenario, the violence deployed on Thursday night in the center of La Paz, or that generated in Santa Cruz, where two men lost their lives, must be understood.

“It is terribly regrettable that human lives are lost, the reason for the existence of the State is the protection of life; we have demanded a thorough investigation to find the authors and have an exemplary penalty, regardless of whether they are from one group or from another,” he concludes.