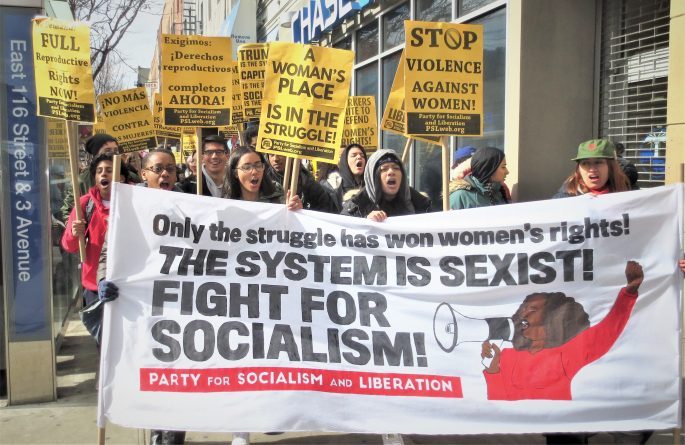 Brian Becker is a co-director of the International Action Center (IAC), a steering-committee member of International ANSWER, and a former member of the Secretariat of the Marxist-Leninist Workers World Party (WWP). He was also a contributor to the WWP newspaper, Workers World. Through his association with these organizations, Becker became a prominent figure in the anti-war movement’s massive post-9/11 peace rallies.

The Party for Socialism and Liberation turns 15 years old today. We started with a small handful of communists who were determined to build a large-scale socialist party in the country that seemed to have most thoroughly rejected socialism. That seemed like a daunting task and even some of our dearest friends and comrades wished us well but thought we were dreaming. They rated our chance of success at somewhere between zero and zero. We were few in number, had virtually no resources and socialism was treated as an absolute taboo here in the center of world capitalism. Revolutionaries are accused of being dreamers. In one sense that is true. They set out to do the impossible or what seems impossible. The commit themselves unwaveringly to the task at hand. And they work and don’t stop working.

Today, the PSL has branches, groups, collectives and members throughout the country. We now have an organized presence in 93 cities and towns. We are still relatively small but we are growing dynamically. Most importantly, the interest and support for socialism is growing throughout the country in spite of the nearly non-stop hostile propaganda and demonization efforts by the bourgeois media launched against the idea.

A Harris poll for “Axios on HBO” finds that 40 percent of Americans say they would prefer living in a socialist country over a capitalist one. The number of women between the ages of 18 and 54 favoring socialism is 55 percent, showing that women as a “class” are generally to the left of men. Across all ages, half of those with an income under $50,000 per year, and half of all renters, say they would prefer to live under socialism.

Since the popularization of socialism is still in its infancy there is not one accepted definition of the term socialism but one can see from the Harris Poll results that the widely understood characteristic features include: universal healthcare (which 76% of people associate with socialism), tuition-free education (72 percent), living wage (68 percent), state-controlled economy (66 percent), state control and regulation of private property (61 percent), high taxes for the rich (60 percent), and strong environmental regulations (56 percent). Half of all respondents associate socialism with worker ownership and control over their workplaces.

The new popularization of socialism
The rising tide of socialism is rooted in several objective realities. The cloud of the “Cold War” has lifted somewhat a quarter century after the dissolution of the Soviet Union. For most of the 20th century, socialists in the United States were vilified and condemned as the fifth column of an enemy state. This was convenient for capitalists and their apologists who used anti-communism to drive the most determined fighters for social justice out of the unions, educational institutions, media platforms and cultural movements.

The capitalists have also made socialism popular – but by accident. Unrestrained by socialism internationally and the resistance of socialist militants internally, the U.S. capitalist class has demonstrated the most grotesque greed, avarice, decadence and fortune-building while huge parts of the population were moved into poverty or near poverty. A report from the Poor People’s Campaign estimates a staggering 140 million are in or near poverty.

During the past three decades workers have lost rights, benefits, representation, and even the most minimal exercise of power as the capitalists have gobbled up the wealth and resources of society. Jeff Bezos is now “worth” $160 billion; that is accumulated by the destruction of smaller capitalists and middle-class businesses and premised on the actual labor of hundreds of thousands of low-paid Amazon workers whose every physical movement is digitally tracked and reported to improve ever-greater “efficiency.”

Young people, with the exception of those from families in the top 20 percent, are promised a future of personal debt, the gig economy, and perpetual economic insecurity. Millions of young people in America from Black, Brown and poor white communities have been and will be incarcerated in private and state-funded prisons where slavery is still legal.

There is another objective reason that will accelerate socialism’s growing popularity in the coming years. The United States is ideally suited for the immediate implementation of socialist-oriented reforms that could provide tangible benefits to the majority. The U.S. capitalist class has already organized production, distribution and finance in highly centralized monopolies. Production is largely rationalized and the division of labor is fully socialized. It is only in the area of ownership, and thus the profit-taking, that the economy is still “private.” Transferring or collectivizing Amazon, Google, Facebook, Apple, Microsoft, Walmart, as well as energy and telecommunications, making them into public property could be done almost overnight. Their vast profits and technological apparatus could be used for the public good. Free health care and higher education, subsidized high-quality public housing and a massive rebuilding of the country’s infrastructure on the principles of a “green economy” could be immediately undertaken.

Socialists must reject self-censorship
The taboo of being a socialist is starting to die away but not fast enough. Society urgently needs a major transformation. It is an imperative need. Tinkering around the edges will not do.

How do taboos die? They don’t die on their own. The transformational public shift in attitudes toward LGBTQ people is perhaps the clearest modern example of how consciousness shifts and reactionary taboos can be overcome.

A few months after the founding convention of the PSL (June 2004) the widely despised war criminal George W. Bush was re-elected to a second term in the White House. It was quite a remarkable event and very demoralizing for progressive people. There were several reasons for his victory. But the focus in the media and in most public discussion was how the Republicans had mobilized strong voter turnout in key states by placing anti-gay rights referendums on the ballot in 11 states. In each state the referendum succeeded and each of those states voted for Bush.

As expected, liberals lamented the “incurable backwardness” of the American people. They engaged in a pathetic cathartic exercise of nationwide hand-wringing. Most of the Democratic Party leadership also decided that to win future elections the party should stay clear of a full embrace of gay rights or marriage equality. In fact, in the 2008 primary Obama and Clinton made it clear that they both opposed marriage equality thus refusing to challenge the reactionary position that marriage could only be between a man and a women. That was the dominant position in ruling-class politics. Millions of LGBTQ people thoroughly rejected the appeal to stay quiet, retreat, and become invisible so as to appease the bigots and bigotry.

How does a social taboo die?
Today, 15 years after the 2004 election, marriage equality is the law of the land. In a poll last week released by Reuters/Ipsos far more people said they are more concerned about a candidate’s age than sexual orientation. What accounts for the dramatic shift in public attitudes in such a short time? The number one reason is the determination, defiance and bravery of millions of people from the LGBTQ community who have refused to go back into hiding about who they are and who they love. Self-censorship had previously been a form of protection against hatred and violence. The voice of bigotry was the loudest and seemed to dominate society everywhere. No longer!

While no analogy is perfect, there is an important lesson here for all socialists in the United States. Those who advocated for socialism were forced into hiding and self-censorship after World War II as anti-communist repression swept through the country. To maintain employment and avoid devastating social ostracism millions of leftists dropped the label of socialism. They called themselves “progressives” instead. They resigned from political parties and joined social justice committees of liberal churches. Socialism disappeared from acceptable public discourse except in the mountains of propaganda from the broadcast media, and the literature and academic curricula that demonized socialism and communism as the equivalent of fascist totalitarianism.

That period is fundamentally over, but its legacy must be openly challenged; it’s time to proudly set forth the socialist program.

Socialism is the alternative to capitalism. Property is either privately owned or publicly owned. Private ownership of the core banks, industries, energy sectors, and communication platforms is the essence of the political and economic power held by a handful of billionaires — regardless of who is elected. The capitalist state is, in its essence, a massive system of organized violence that targets poor and working class people at home and foreign nations who seek to be independent from the U.S. Empire. In its totality this system represents a negation of genuine democracy. The majority class in America is shut out from decision making on the most vital issues.

Socialism means that workers have the power in Congress, the courts and all areas of governance. It means that workers in the United States take control of every economic enterprise. It means the expropriation and seizure of the already centralized big banks (not just bank deposits) and the creation of a people’s bank that helps reorganize the economy, deploying resources according to a plan for what society needs, while guaranteeing to every individual the right to a decent paying job, free health care and child care and affordable housing. Socialism means organizing the economy and investing in the technologies needed to quickly transition towards the end of fossil fuels.

The U.S. working class is the majority class in society. It is fully capable of taking control of the economy and all economic enterprises. It is a diverse and talented class made up of people who work on assembly lines, in retail, as software technicians, as engineers, health care professionals, teachers, drivers, custodians, journalists, construction workers and many other areas of work. That working class does not need a small class of corporate executives and owners to figure out what to do.

Socialism is the future. In fact it represents the only future. Capitalism in its current form, its ‘highest” form, guarantees that society as we know it will end, to be replaced by permanent and ever-sharper class inequality, permanent unemployment, irreversible climate change and a new round of destructive wars aimed at restoring the declining U.S. Empire.

Socialists need to end the long and dark period of censorship and self-censorship and adopt as our number one priority that we persuasively win over the majority of the working class to a socialist program. As Marx said in the 1848 Manifesto we “disdain to conceal our aims.” To the barricades in the battle for socialist ideas!

Brian Becker is a co-director of the International Action Center (IAC), a steering-committee member of International ANSWER, and a former member of the Secretariat of the Marxist-Leninist Workers World Party (WWP). He was also a contributor to the WWP newspaper, Workers World. Through his association with these organizations, Becker became a prominent figure in the anti-war movement’s massive post-9/11 peace rallies.