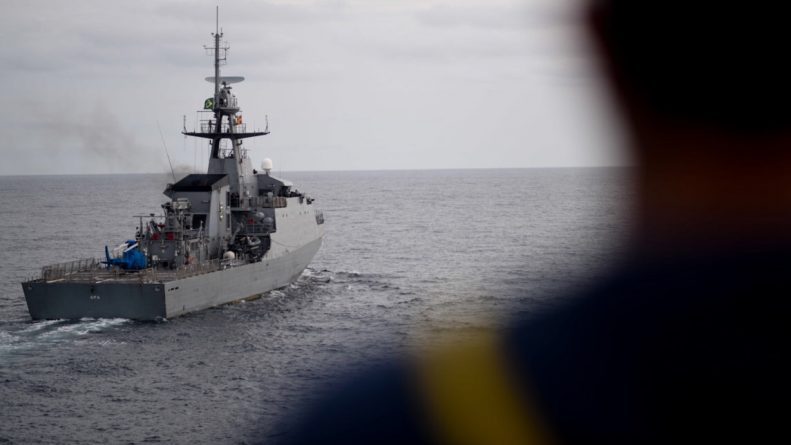 John Bolton, the new US National Security Advisor, has relaunched the Pentagon’s project for the destruction of the State structures in the Caribbean Basin.

We remember that in the aftermath of the 9/11 attacks, the Secretary for Defense at that time, Donald Rumsfeld, created the Office of Force Transformation and nominated Admiral Arthur Cebrowski as its Director. Its mission was to train the US army for its new role in the era of financial globalization. It was designed to change military culture in order to destroy the State structures of the regions which were not connected to the global economy. The first chapter of this plan consisted of dislocating the “Greater Middle East”. The second stage was intended to perform the same task in the “Caribbean Basin”. The plan was designed to destroy some twenty coastal and insular States, with the exception of Colombia, Mexico and as far as possible, territories belonging to the United Kingdom, the United States, France and Holland.

When he arrived at the White House, President Donald Trump opposed the Cebrowski plan. However, two years later, he has so far only been able to prevent the Pentagon and NATO from handing over States to the terrorist groups they employ (the “Caliphate”), but not to stop manipulating terrorism. Concerning the Greater Middle East, he has managed to diminish the tension, but the wars still continue there at lower intensity. Concerning the Caribbean Basin, he restrained the Pentagon, forbidding them to launch direct military operations.

Last May, Stella Calloni revealed a note from Admiral Kurt Tidd, Commander in Chief of SouthCom, exposing the operations aimed at Venezuela [1]. A second penetration was simultaneously implemented in Nicaragua, and a third, running for the last half-century, against Cuba.

Working from several previous analyses, we concluded that the destabilization of Venezuela – beginning with the guarimbas movement, continued by the attempted coup d’etat of February 2015 (Operation Jericho) [2], then by attacks on the national currency and the organization of emigration – would end with military operations [3] led from Brazil, Colombia and Guyana. Multinational maneuvers of troop transport were organized by the United States and their allies in August 2017 [4]. This was made possible by the election of pro-Israëli President Jair Bolsonaro, who will come to power in Brasilia on 1 January 2019.

The next Vice-President of Brazil will be General Hamilton Mourão, whose father played an important role in the pro-US military coup d’etat of 1964. He has made himself famous by his declarations against Presidents Lula and Rousseff. In 2017, he declared – on behalf of the Grand Orient of Brazil – that the time for a new military coup d’etat had arrived. Finally, he was re-elected with President Bolsonaro. In an interview with the magazine Piaui, he announced an impending overthrow of the Venezuelan President, Nicolás Maduro, and the deployment of a Brazilian “peace” force (sic). Faced with the gravity of these statements, which constitute a violation of the United Nations Charter, elected President Bolsonaro declared that no-one had any intention of going to war with anyone and that his Vice-President talked too much. In any case, during a press conference on 12 December 2018, President Maduro revealed that US National Security Advisor John Bolton was handling the coordination between the teams of Colombian President Iván Duque and those of the Brazilian Vice-President. A group of 734 mercenaries is currently being trained in Tona (Colombia) in order to perpetuate a false flag attack, allegedly by Venezuela, against Colombia – thereby justifying a Colombian war against Venezuela. The war would be under the command of Colonel Oswaldo Valentín García Palomo, who is today in hiding after the attempted assassination by drone of President Maduro during the anniversary of the National Guard on 4 August 2018. These mercenaries are supported by Special Forces stationed on US military bases in Tolemaida (Colombia) and Eglin (Florida). The US plan is to take over, from the beginning of the conflict, the three Venezuelan Libertador military bases of Palo Negro, Puerto Cabello and Barcelona. The US National Security Council is attempting to convince various states not to recognize Nicolás Maduro’s second mandate (he was re-elected last May, but will assume power with the New Year). This is why the states of the Lima Group contested the Presidential ballot even before it took place, and illegally forbade Venezuelan consulates from organizing it. Furthermore, the migration crisis turns out to be just one more manipulation – many of the Venezuelans who fled the monetary crisis believing that they would easily find work in another Latin-American country are today trying to return home. But the Lima Group prevents them from doing so, forbidding Venezuelan planes who are attempting to repatriate them to use their airspace, as well as interdicting the buses which have come to help them cross the borders.

Everything is, therefore, happening as if we were watching a remake of the events which bloodied the Greater Middle East after the attacks of 11 September 2001. The main point is not the military actions, but the appearance of disorder that the events present. First of all, it’s intended to confuse people into making a silk purse out of a sow’s ear [5]. In the space of five years, Venezuela and Nicaragua, which used to enjoy a positive image abroad, are now being wrongly described as “failed states”. While the history of the Sandinistas and their struggle against the Somoza dictatorship has not yet been re-written, it is taken for granted that Hugo Chávez Frías was a “Communist dictator” (sic), despite the fact that his country experienced a massive economic and political leap forward during his Presidency. It will soon become possible to destroy these states without anyone complaining.

Time is passing more and more rapidly. When, in 1823, US President James Monroe decided to close the Americas to European colonization, he could not have imagined that 50 years later his decision would morph into an affirmation of US imperialism. Just as today, when President Donald Trump declared, on the day of his investiture, that the time for régime change was over, he did not imagine that he would be betrayed by his own people. Nonetheless, on 1 November 2018, his Security Advisor John Bolton declared in Miami that Cuba, Nicaragua and Venezuela formed a “troïka of tyranny”. Then his Secretary of Defense, General James Mattis, affirmed on 1 December, before the Reagan National Defense Forum, that elected President Maduro is an ” irresponsible despot” who “has to go” [6].

Thierry Meyssan is a political consultant, President-founder of the Réseau Voltaire (Voltaire Network). His latest work in French is Sous nos Yeux. Du 11-Septembre à Donald Trump (Right Before our Eyes. From 9/11 to Donald Trump).