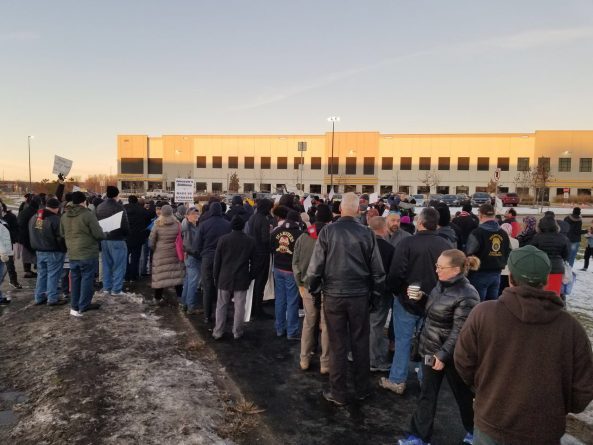 Last weekend, Amazon workers demonstrated against productivity requirements at Amazon’s Shakopee, Minnesota fulfillment center. Over 200 people protested in the suburban area. Their demonstration ended with a march toward the front entrance of the warehouse, where over a dozen police vehicles immediately surrounded the protest and broke it up.

Earlier this year, Amazon was forced to negotiate with the Awood Center, a non-profit which organized Amazon workers in opposition to the unfair speed of work as well as against the company’s decision to deny religious workers time to pray. Minneapolis, near where the fulfillment center is located, is home to the largest East African immigrant community in Minnesota and the Awood Center reports that 60 percent of the Amazon workforce is East African. The East African workers are predominantly Muslim and were not given enough time to take prayer breaks. Moreover, Amazon recently increased rates for many workers to 230 items per hour, a policy which will result in more injuries and arbitrary firings.

The World Socialist Web Site spoke with workers at the rally about the issues faced by Amazon workers in Minnesota and across the country. The workers said the fight for lower rates should involve all Amazon workers worldwide.

Jamal, a worker at the Shakopee fulfillment center told the WSWS, “At any moment, you could be fired or written up for being too slow. They want us to pack 230 items an hour, which means you have to scan and pack an item every 10 seconds. When you go to the bathroom, that counts against your rate. We can’t go to the bathroom, get hurt, or take a prayer break without fear of being fired.”

Jamal continued, adding that if no one took action against Amazon, “The rates are going to keep increasing, and no one will be able to keep up.”

Jamal agreed with the WSWS that the struggle of Amazon workers should be linked up with the rest of the working class, adding, “Jeff Bezos doesn’t understand how hard it is to work faster, while we made him rich.”

Another worker, who chose not to give her name, spoke about Amazon’s recent wage raise. “We get $16.50 an hour here in Shakopee,” she said. “Fifteen dollars an hour is not a big deal for Amazon. At my previous job, we had showers and longer breaks, and I made the same amount.”

While workers at the protest were voicing their opinions about low pay and high rates, the organizers made no clear demands aside from lowering the productivity requirements in general.

Amazon workers everywhere sympathize with the opposition that is developing among Minnesota workers to high rates, low wages and short breaks, both on the basis of demanding better working conditions, as well as for defending the right of Muslim workers to practice their religion free of discrimination. Despite this, several organizations linked to the Democratic Party and the trade unions, including the Service Employees International Union (SEIU) and the Teamsters, attempted to take over the movement and prevent it from growing.

Rather than fighting for the interests of workers, the trade unions try to prevent strike action and to keep workers tied to the Democratic Party, which is the party that has received most of Amazon CEO Jeff Bezos’ donations in the 2018 election cycle. The SEIU brought recently-elected Democratic Party Congresswoman Ilhan Omar to speak at the protest, where she made vague appeals for Amazon to “respect us” or “hear our voice.” The SEIU brought Omar to present the Democratic Party as a vehicle for change, capable of hearing the appeals of East African workers. The SEIU did not mention that it was the Democratic Party under Barack Obama who carried out record numbers of drone strikes in Somalia, killing hundreds.

The Teamsters union was also present. Two months ago, the Teamsters rammed through a sell-out contract for 250,000 United Parcel Service (UPS) workers, despite the fact that workers rejected the deal in the contract vote.

The contract included the introduction of a new, lower-paid tier of “hybrid” workers, who will work on weekends and shift back and forth from the warehouse to driving, all while being paid up to $6 per hour less than current drivers. The contract set the starting wage at UPS lower than current Amazon workers—at $13 per hour. The Teamsters were also engaged in a blackmail campaign against the UPS workers, threatening them to vote for the concessions contract or face a pay cut.

The struggle of East African Amazon workers in Minnesota is significant, and the eruption of anger over unsafe working conditions is a step in the resurgence of the class struggle worldwide. But to succeed, workers must break free from the trade unions and Democratic Party hacks who are trying to keep their struggle from developing and block them from linking with workers at other fulfillment centers and in other industries in a common fight against the corporate giant.