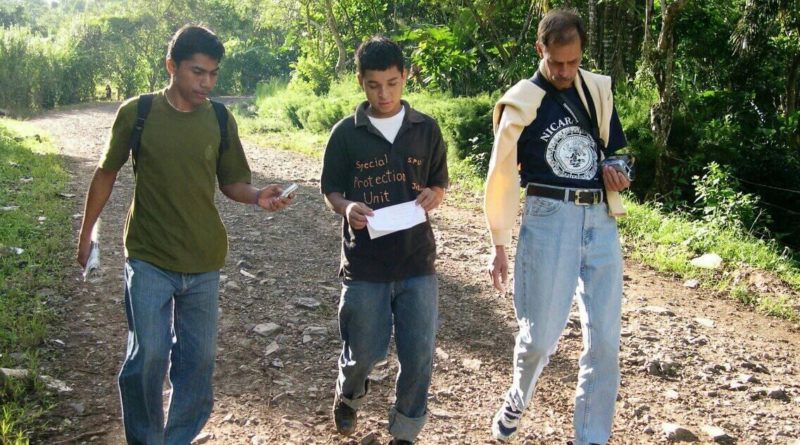 Below is the family-written remembrance of Tom Baker, well-known Chicago solidarity activist who in recent years has lived full-time in Nicaragua. I believe Tom and I started work for the Nicaragua Network at about the same time in 1987; Tom as Midwest Regional Director and me as National Fundraising Coordinator. This was the time of the Iran-Contra Scandal and the Nicaragua Network had 350 local committees in 46 states. The Midwest region was one of the most active. In 1990, after the Sandinista electoral defeat, the Nicaragua solidarity movement shrank quickly. We reduced our national staff by half and had to stop paying our regional staff. Typically, Tom continued to do the work regardless of not being paid. Indeed, the Midwest Region continued to hold regional meetings for several years after the other regions had lost their cohesion.

Tom continued to volunteer as we created the Alliance for Global Justice in 1998. He joined the AFGJ board in 2003 and served there until his death. He was also an active participant in the Latin America Solidarity Coalition and promoted Fair Trade sale of Nicaraguan coffee in the US. Everyone who was touched by Tom liked him. Sometimes his pronouncements would be followed by silence as folks struggled to understand what he was saying. Once one realized that Tom spoke and wrote with his own version of “prose-poetry,” the profound depth of his thoughts came shining through.

I did not know much of Tom’s history or life outside of the Nicaragua solidarity movement. I do remember a story he told once about his Vietnam War experience. Tom was a military press photographer while in Vietnam. He said all of the helicopter pilots wanted to fly with him because never once did a copter he was flying in come under fire or even see combat! Tom was a magical being in some ways. I could almost believe he was charmed.

Here are more details from his family and an appeal to donate in his memory to the newly created Nicaragua Solidarity Fund.

Our dear brother, Thomas Wendell Baker, found his peace Saturday, May 30, 2020 in Masaya, Nicaragua. He was born December 5, 1944 to Robert Wendell Baker and Anna Frances (née Sartor) Baker, both deceased. He grew up in Washington, Iowa and enjoyed many family gatherings at the home of his Sartor grandparents at 504 W. Washington and with Baker aunts, uncles, and cousins at the Statler farm in Wayland. Later the family relocated to Fairfield, Iowa, where his father managed Sitler’s Auto Parts Store.

Tom graduated in 1963 from Fairfield High School and would regularly attend their class reunions. He graduated with a bachelor’s degree in history and a teaching credential in secondary education from the University of Iowa in 1967 and later earned a special education endorsement. After serving in the Army in Viet Nam, he returned to Iowa where he was a member of the People’s Unitarian Universalist Church in Cedar Rapids. He worked as a Vista worker and community organizer for Citizens for Community Improvement. He volunteered with the Iowa Historical Society and was part of the team that worked to preserve the Greene mansion in Stone City.

He later settled in Chicago, Illinois where he taught in the Chicago Public Schools for 17 years. He was also active in the Rogers Park Neighborhood’s struggle to resist gentrification and was recognized with a national award for his leadership. After he retired from teaching, he drove a taxi in Chicago which he described as a mini-United Nations and continued his activist work in “Sweet Home Chicago.”

A lifetime social and political activist, Tom eventually served as Midwest Regional Director for the Alliance for Global Justice. Beginning in the mid-1980s, he participated in international coalitions that traveled to Nicaragua as part of the Nicaragua Solidarity Network supporting the local campesinos and coffee growers in their struggle for political independence. He became active with the growers to achieve their initiative to distribute organic, sustainably grown coffee in the United States.

Tom was an artist, writer, and photographer, with ‘the heart of a poet.’ Relocating to his beloved Nicaragua in 2017, he lived there until his death from pancreatic cancer at age 75. He is survived by his sisters, Lois Baker of Iowa City, Iowa, and Julia (née Baker) Vanderhoff of Greenwood, Indiana; four nephews, a niece, and many friends who shared his heart and passion for social justice.

The family wishes to express gratitude to Tom’s compadre, Danilo Calero, for his selfless loyalty and care during Tom’s illness; and to Coleen Littlejohn of Managua, Nicaragua, for coordinating his care and communicating with the family.

If you would like to donate in memory of Tom, please use the following link to the newly created Nicaragua Project Fund “Padre Miguel d’Escoto Brockman” to help the country with the pandemic. Because of US sanctions, it is impossible for Nicaragua to access emergency funds and debt relief available to other countries from the World Bank, the Inter-American Development Fund and the IMF.