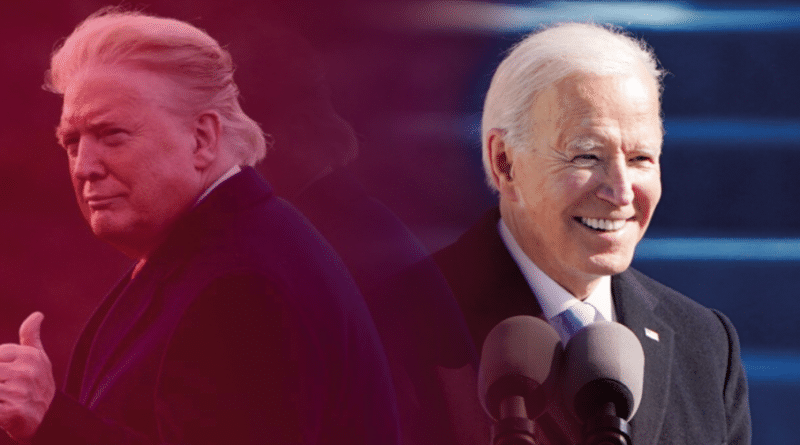 Under Biden, as before, we need the broadest possible class-conscious coalition against the capitalist machine that intends to march the US and the world into more war and poverty — singling out Trump as a ‘fascist’ aberration only hinders that task, writes NICK WRIGHT in the Morning Star

EARLIER this month saw Washington DC — a largely working-class black city with a suburb of the rich and powerful — filled with more US troops than are currently deployed in combat operations abroad.

Why such a concentration of military firepower when, from eyewitness accounts of the “Capitol Hill riot,” a fraction of the ferocity and firepower the police routinely use at a Black Lives Matter protest could have seen off this supposed storming of state power?

Back in the bayou his more enthusiastic followers have stocked up on K-Mart’s finest firepower but these crackers do not present a serious challenge to the coercive power of the US state.

Far from seizing the centres — symbolic or real — of state power, they were shepherded around the building by a corps of Capitol cops less energetic than the stewards at an Isthmian League football fixture.

The only instrument of state power thought worthy of capture was Nancy Pelosi’s Speaker stand.

In conventional military theory, and well-tried CIA contrivance, a successful coup depends on a simultaneous seizure of the main symbolic locations of power, centres of communications and transport and the concentration of sufficient military power to make a counter-attack a high-cost operation.

Even in the most shambolic of states, a coup needs decent staff work, careful planning, a modicum of secrecy and enough disciplined troops to look credible for CNN.

Trump supporters’ effort at the beginning of this month failed to meet every one of these criteria — and a question naturally occurs.

Why is the Washington political Establishment so invested in the presentation of Trump’s carnival outing as a threat to the existing order?

Britain’s own prophet of impending fascism, Paul Mason, speculated immediately after the Capitol riot, “if the militias ever turn up to an event like this — and that could be as early as the inauguration — America is looking at a serious fascist challenge for power.”

In emboldened type he argues that the far right “understand the weakness of the state machine they are up against, despite its bloated, militarised character.”

In hyperventilated hyperbole Mason then went on to argue that Trump “overtly and physically reached out to the fascist element in his base and their immediate response was to take that as permission for the most shockingly violent act.”

Mason has a book to sell but — even in his chosen marketplace for fleetingly held and indisputably daft ideas — to equate this pantomime protest as a “shockingly violent act” invites derision.

In the “shockingly violent” stakes the US capital, Washington DC, itself sits only midway in the US hierarchy of homicide with a murder rate of 23.5 killings per 100,000 residents.

For comparison, the 1965 military coup in Indonesia — organised by the CIA and our own MI6 — saw something between two and three million communist supporters massacred in a few months of murder.

During the US war on Vietnam the CIA’s Phoenix assassination programme took out 81,740 people suspected of National Liberation Front membership, of whom 26,369 were killed.

It is true that the coercive forces of the US state are increasingly bloated. There are 697,195 police officers, the FBI has 35,000 employees, of which 13,233 are special agents and 3,230 intelligence analysts.

The size of the National Security Agency is a state secret but estimates put it between 30,000 and 40,000.

The size of the CIA is no less secret and while many of its staff work overseas it is estimated to directly employ over 21,000. The Department of Homeland Security employs near a quarter of a million people.

The US National Guard is 450,100-strong. While US military forces are deployed in more than 150 countries and 800 military bases around the world, just 160,000 of its 1.3 million active-duty personnel are stationed outside the US.

So why does the US political and media establishment promote the nonsensical notion that Trump’s stage army represented an existential threat to this exceedingly well defended state?

And why does Mason speculate that a serious challenge for power from fascists is possible?

Of course, the January 6 events were not simply frivolous. Rather they were an eccentric counter to the return to government by the most powerful and decisive sections of US capital that Biden’s narrow victory represents.

The 2020 presidential election brought to a head the deep structural crisis of US capitalism — desperate unemployment and poverty in the absence of an adequate social safety net — appalling health outcomes where 60 million have no health insurance while the decayed state cannot counter the Covid-19 crisis or collapsing public confidence in basic institutions and main instruments of law and public order.

The US Peace Council points out that as the basic needs of working people for economic relief from evictions, unemployment and the pandemic itself have been put on the back burner a record $740 billion military appropriation sailed through Congress with only 20 Democrats in opposition.

It argues that as a Domestic Terrorist Act is being touted in the name of combating fascism, it is in fact a lurch in the direction of an authoritarian state.

Bipartisan support for the Biden-authored Patriot Bill provides a legal veneer to abrogate the Bill of Rights, while Barack Obama himself signed away habeas corpus in 2011.

Maryam Pashali argued convincingly in this newspaper this week that the ideas that shape the US far right as a heterogeneous and contradictory force cannot be fashioned from boilerplate fascist formulae but are rooted in the racist specifics of the slave and settler state.

And US analyst Greg Godels, writing under the pen name Zoltan Zigedy, pointed out that if the four years of Trump taught us anything, it was that the rules of the game were carefully protected by long-established mechanisms of capitalist rule.

The forces that coalesced around Trump’s thwarted bid for a second presidency cannot be retrofitted into the commonplace conceptions of a fictionalised “fascism” to prettify Biden’s restoration regime.

No-one should minimise the dangers of an unchecked rise in a right-wing and racist ideology, whether it takes the peculiar US form or the more familiar forms on our continent.

Classical fascism itself was never a uniform phenomenon but, in every national case, an expression of a particular constellation of class forces and crucially dependent on the reactionary mobilisation of distinctive national narratives of nationhood and empire.

In every case where it acquired state power it was as an expression of big capital’s inability to contain the contradictions that inevitably arise within capitalism.

Capitalism is indeed in serious trouble and in both Britain and the US the failure to deal effectively with the Covid-19 crisis has highlighted just how deficient is the social system.

But the crises are not yet deep enough, the existing systems for compelling class conciliation not yet entirely compromised for big capital to invest its future in a figure like Trump.

So long as working-class interests are subordinated to the stabilisation of capitalism then chancers like Trump will find ways to aggregate the exploited and angry with reaction.

But at a point when the most pressing need is for the working class to act in its own class interests, the liberal outriders of the neoliberal order want us to outsource anti-fascist action to the capitalist state machine.

There is an urgent need to disrupt the growing constellation of right-wing racist, fascist obscurantist, anti-semitic, anti-Muslim elements that — if merged into a cohesive movement — could become a significant reserve for a desperate bourgeoisie.

Building the widest anti-racist and anti-fascist coalition is a priority — but in undercutting the fascist appeal to workers, the principal strategic objective of the left and the working-class movement must be to become the most powerful advocates for working-class interests and against the governments of big capital.