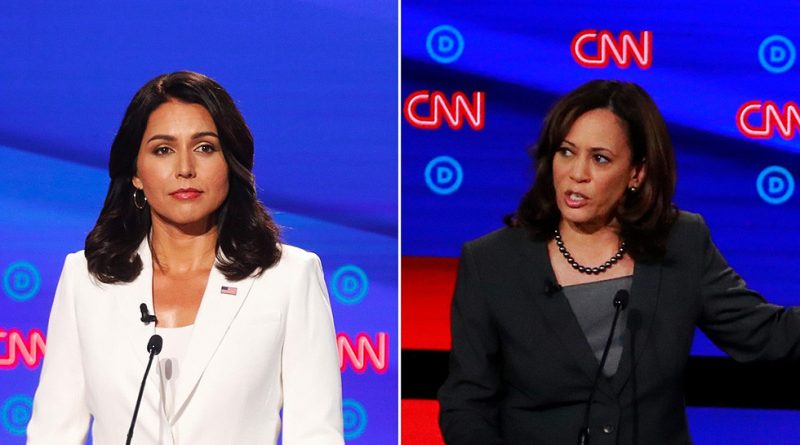 Democratic presidential hopeful Tulsi Gabbard slammed rival Kamala Harris for her actions as California’s top cop during the second round of debates, winning over viewers across social media.

Gabbard dominated Google searches for the entire country following the Democratic primary debates on Wednesday, buoyed by her confrontation with California Senator Harris, who has downplayed her “tough-on-crime” record as the state’s attorney general in favor of a warmer, fuzzier progressive look.

“When you were in a position to make a difference or an impact in people’s lives, you did not,” the Hawaii congresswoman said, pointing to Harris’ reactionary pursuit of low-level drug offenders and her controversial decision to keep prisoners locked up in order to use them to fight California’s deadly wildfires.

“Worse yet, in the case of those who were on death row – innocent people – you actually blocked evidence from being revealed that would have freed them until you were forced to do so,” Gabbard declared. “There is no excuse for that.”

The people who suffered under your reign as prosecutor, you owe them an apology.

CNN gave Harris two chances to respond, but she was unable to deny Gabbard’s claims, merely insisting she had “done the work” of reforming the state’s criminal justice system and defending her record in vague terms.

She was, until they scrubbed it and started pushing the Assad gaslighting/smear trend instead. https://t.co/0opUfMHjQL

Despite topping the Google list, some users on Twitter noticed Gabbard’s name wasn’t among the top trends for them. “Why did you remove Tulsi from trending @Twitter?” one user asked.

Yooo. So Tulsi isnt trending but somehow Assad is? This is some serious fuckery.@caitoz @nikoCSFB pic.twitter.com/16g1TazPcY

Tulsi Gabbard is the top search on Google Trends…but not even in the top ten on Twitter. What are the curators doing with the trending module, @Jack? #StopTheBias https://t.co/tjdNCLUUW8

Shortly after, she did briefly appear at the top, though only with her first name, and closely followed by ‘Assad,’ for Syrian President Bashar Assad – ‘Assad apologist’ being the establishment’s go-to rebuke against Gabbard. In fact, it was used as a desperate attempt at deflection by Harris’ press secretary, who spent the debate tweeting about Assad.

Once again Tulsi is most googled candidate. Meanwhile, she is not trending at all on RIGGED twitter BUT “ASSAD” is trending at #1! Again, because twitter is RIGGED! Click on it and you get b.s. like this from Kamala’s press secretary: https://t.co/Tbv0dcbUKg

Whether Twitter tried to ‘shadow-ban’ Gabbard or not, her message has been suppressed by Big Tech before: She is suing Google for inexplicably removing her ads for several hours following the first round of debates, when her name was also the most-searched. The ads remained in place this time.

Deepening the mystery, Twitter CEO Jack Dorsey donated $5,600 to Gabbard’s campaign – the maximum individual donation – the day after the first round of debates, triggering a backlash from his establishment media pals.