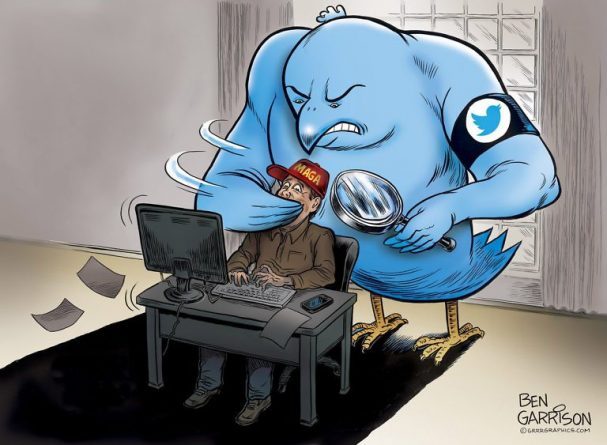 This is the “wildest Hegelian dream” according to Orinoco Tribune’s editor, Jesus Rodriguez, also affected recently by a ban on promoting a post diverging from the ones that favor US corporate interests.

Facebook and Twitter announced that they have eliminated thousands of pages and accounts supposedly for having been used to “influence the politics and public opinion of other countries”, as part of the supposed measures to combat false news on their platforms. The companies announced that they had eliminated thousands of accounts from Russia, Bangladesh, Pakistan, Venezuela and the United States.

The companies made the announcements in their respective blogs (see Facebook and Twitter blogs), although only the company of the blue bird made reference to Venezuela.

Although the accounts had been blocked, the company told NBC, “this decision was taken before the tensions between the government of Donald Trump and the Venezuelan government escalated in recent weeks,” the fact is that in recent days two important Venezuelan accounts were blocked without any explanation:

The account of the Venezuelan newspaper Correo del Orinoco, created on August 30, 2009 in honor of the newspaper of the same name created by Libertador Simón Bolívar in 1818, appears as “Temporarily restricted” and has been unable to publish content since January 29. This account has more than 829 thousand followers and mainly publishes contents of the newspaper’s website, which is attached to the Venezuelan Ministry of Communication and Information and is directed by journalist Desiré Santos Amaral. It is noteworthy that last year the 200th anniversary of the creation of Correo del Orinoco by the Venezuelan Liberator Simón Bolívar was celebrated, a newspaper that played an important role during the war of independence against Spain.

The account @ViceVenezuela of the Vice Presidency of the Republic, which has 329 thousand followers, was also blocked. The account appears as “Temporarily restricted” since January 28, and it cannot publish information either. The office is currently headed by Delcy Rodríguez.

Precedents
It is not the first time that major Twitter accounts linked to the chavista government are massively blocked, particularly during politically critical moments. In November 2013,  Twitter suspended some 6,600 accounts of supporters of President Nicolás Maduro or of officials or institutions of his government, including two media outlets (the newspaper CiudadCCS and the radio network La Radio del Sur). Among those blocked were the then Minister of Communication and Information, Delcy Rodríguez; Wilmer Barrientos, employed at that time in the Office of the Presidency; the then Minister of Agriculture and Lands, Yvan Gil; the governor of Anzoátegui at that time, Aristóbulo Istúriz (@psuvaristobulo); as well as the official accounts of the ministries of University Education, Land, Transportation, for Women, Corpomiranda, the Social Vice Presidency, the Bolivarian University of Venezuela (UBV), the National Experimental University of Security (UNES), Pdval, Mercal, and networks of supporters of Maduro such as ForoCandanga, in addition to numerous journalists, professionals and individuals of note. The accounts were restored days later, alleging that it was “an error”.

In June 2017, dozens of media accounts and chavista activists were suspended without explanation. At least thirteen accounts of the state-run Radio Nacional de Venezuela were suspended, including its main account, @RNVContigo, and the accounts of regional broadcasters @rnvcentral, @rnvtachirafm, @rnvzulia, @rnvanzoategui, @rnvlosllanosfm, @rnvtachirafm and @rnvportuguesa, as well as the @rnvmusical and @rnvindigena channels, and the @rnvcultura, @rnvdeportes and @rnvinter sections. In addition, the accounts of Radio Miraflores (@MirafloresFM) and Miraflores TV (@MIRAFLORES_TV), media of the Presidency of the Republic, as well as important Chavez influencers and tweeters were blocked. None of these accounts could be recovered.

In 2018, the @PresidencialVen account, the Presidential Press team, was temporarily blocked.
Twitter and Facebook announcements
This Thursday, Twitter reported having eliminated “1,196 accounts located in Venezuela that seem to be involved in a campaign supported by a State”, aimed at US audiences. According to NBC, these accounts “tweeted mainly in defense of the country’s president, Nicolás Maduro.”

“We have shared information about these accounts with our colleagues in the industry and we continue investigating the malicious activities that originate in Venezuela, both aimed at audiences in Venezuela and abroad,” Twitter said in its blog.

They also announced that they had blocked a separate network of 764 “Venezuelan accounts with US targets. “We could not definitively link these accounts located in Venezuela with operations of a foreign government against another country. However, these accounts are an example of ‘spam’ content oriented to political issues. ”

Twitter also confirmed that 418 Russian accounts were eliminated, that supposedly they were used to “troll” and to heat the political discussions in the United States. The efforts, said a Twitter spokesman, were less effective than in 2016, when a controversy arose in the United States, claiming that the efforts of false accounts of Russian origin supposedly had great weight in the victory of Donald Trump.

Facebook said on Thursday it had removed a total of 783 pages, accounts and groups from Iran, which were allegedly engaged in “inauthentic coordinated behavior,” the language Facebook uses to describe disinformation campaigns orchestrated by people who use false or stolen identities. Facebook said the accounts were presented as if they were local news agencies, but “they were repeating content from Iranian government media” in 26 countries, including the United States.

Also on Thursday, Twitter said it had suspended 2,617 “malicious accounts” allegedly linked to Iran since August. The accounts – Twitter said – had as targets the United States, Israel, Saudi Arabia and Pakistan.

Nathaniel Gleicher, who is in charge of cybersecurity on Facebook, said the social network discovered the problem, in part, after Twitter shared information about the accounts linked to Iran it found. A Twitter spokesman confirmed that the two companies worked together to track Iranian accounts. “This is an encouraging example of the kind of collaboration we hope to build throughout the industry,” said Gleicher.

For his part, Yoel Roth, responsible for integrity on Twitter, wrote in a blog post that the company will continue to work with other technological giants “to better understand and identify malicious activity.”

It is unknown to what extent these attacks directly involve well-established Russian and Iranian media, such as HispanTV, Sputnik or Russia Today (RT). In the past, in October 2017, Twitter blocked all publicity accounts of Sputnik and RT (both Russian), while Facebook  for a time blocked the RT account in January of that same year. In August 2018, YouTube (owned by Google) blocked the YouTube channel of the Iranian agency HispanTV.
Orinoco Tribune tried a few days ago to “boost” some news pieces using the Facebook advertisement tool and the company did not allow  the promotion of posts related to the Coup D’Etat attempt by the US, alleging that the company was not based in the US and was only to promote post connected to politics if the target country was Venezuela.

This is a terrible reality which may be affecting hundreds of news outlets worldwide that defend ideas different than the ones promoted by the US. This trend approaches the best Hegelian dream in which social media corporations will decide what content should or should not reach any country.