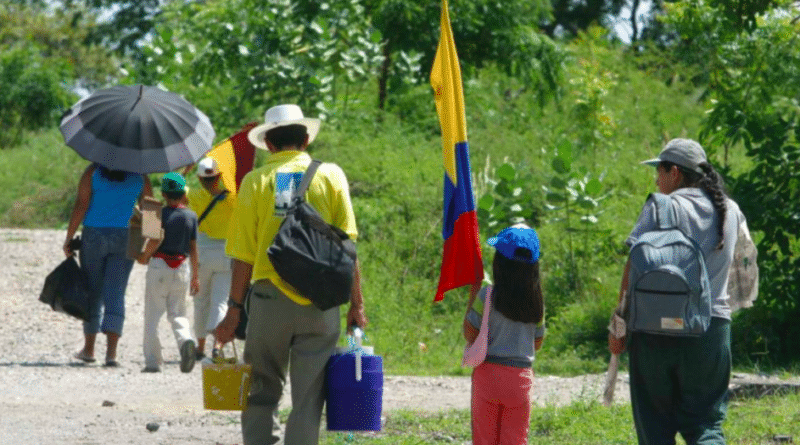 The United Nations Office for the Coordination of Humanitarian Affairs (OCHA) in Colombia reported that at least 8,642 people have been displaced as a result of the violence in the country in the month of May. Most of the victims of forced violence were from the departments of El Chocó, Nariño, Antioquia and Córdoba.

According to OCHA, those who fled from their homes did so without any plan of returning, since they would rather move to the cities and lose everything, than return to their homes where they fear for their lives.

OCHA reported that 3,267 of the displaced people are from the Roberto Payán and Magui Payán municipalities in Nariño department, representing 37% of the displacements on the national level.

El Chocó is also one of the most affected areas, registering at least 2,739 victims of forced displacement.

Most of the forced displacements have been due to clashes between security forces and armed groups, which prevented the movement of people between communities, as well as threats from criminal gangs and antipersonnel mines that have impeded agricultural production.

OCHA noted that 82% of the displaced people received threats from criminal groups. OCHA has also identified about 3,910 people affected by restrictions of movement due to the violence.

There are 928 children and adolescents among the displaced, and more than 30 communities have been affected.

These families have been forcibly displaced since April due to the continuous fighting between security forces and armed groups.

OCHA added that another 294 people, displaced from the Zabaleta community, have been identified and registered in the city of Montería.

In its statement OCHA expressed concern over ”the precarious housing, health, food security, and protection of those displaced communities located in the center of Montería, as well as those displaced, confined and at risk found in the ​​Tierralta rural area.”

Featured image: According to OCHA Colombia, at least 8,642 people have been displaced by violence in Colombia during the month of May. File Photo.