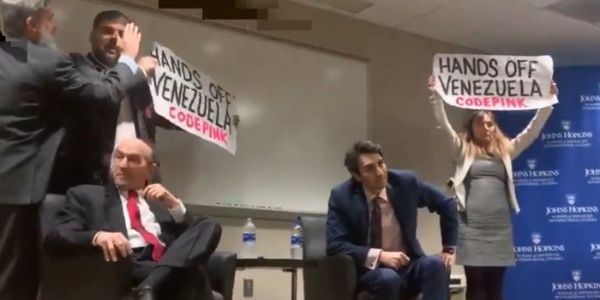 The US official decided to flee a meeting held by the Alexander Hamilton Society after activists “joined” the activity with banners and anti-coup slogans.

Activists of “Codepink”, a civil organization that opposes US military occupations in other countries, on Tuesday interrupted an event in which Washington’s special envoy for Venezuela, Elliott Abrams, participated.

The official decided to flee a meeting held by the Alexander Hamilton Society after activists interrupted him, accusing him of war crimes for the “sanctions” policy against Venezuela.

In videos posted on social networks, activists are shown with posters that say “Hands off Venezuela” and stand where Abrams presented the current state of the US “regime change operation” against the government of Caracas.

Elliott Abrams, a major architect of the #Iraq War, the #Iran Contra Scandal & the crisis in #Venezuela, left his own event at @SAISHopkins after CODEPINK disrupted his talk with questions regarding his involvement in Venezuela’s US- manufactured humanitarian crisis. pic.twitter.com/euiZ4qVlKq

Abrams avoided questions after the meeting at the Alexander Hamilton Society was “joined” by protesters and locked himself in one of the offices of the building where an interview was conducted.

The Alexander Hamilton Society is presented as an independent, non-partisan and non-profit organization dedicated to promoting constructive debate on basic principles and contemporary problems in foreign, economic and national security policies.

In a recent interview, Abrams said the president of the United States, Donald Trump, has decided to increase his campaign of pressure on Venezuela’s oil sector.

RELATED CONTENT: Foreign Minister Arreaza Denounces Threats of Naval Blockade Against Venezuela
The special envoy of the United States said that Washington would go after Venezuelan oil customers, including those from Asia, as well as intermediaries that help Caracas hide the origin of the oil.
The International Criminal Court (ICC) already initiated an investigation into the application of US sanctions against Venezuela, for the unilateral coercive measures that was assigned to the Preliminary Issues Chamber III, and ordered, with immediate effect, the reallocation of the case to Pre-Trial Chamber III.
The move, dated February 19, occurs after the lawsuit filed by Venezuela in the international body on February 13, in which it requests that crimes against humanity committed by the US regime against the Venezuelan population be investigated.

Featured image: Elliot Abrams ran away from the meeting and refused to answer questions from Codepink activists | Photo: twitter @codepink