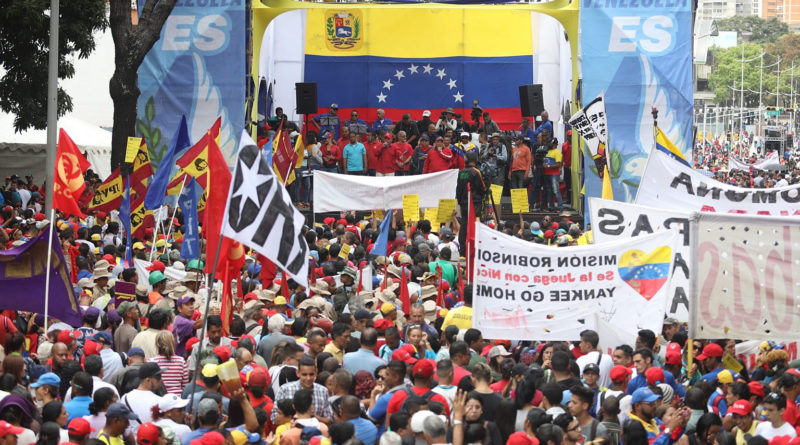 Tens of thousands of people marched on Tuesday, March 10 from Morelos Square in Caracas to the Federal Legislative Palace, headquarters of the National Constituent Assembly, in support of the government of President Nicolás Maduro on a day when the opposition threatened violent actions, after the opposition deputy Juan Guaidó, self-proclaimed interim president of the country with support from the US government, had summoned [supporters] to the same place to [hear his] alleged “statement of conflict” to the National Assembly, of which he also considers himself president.

“This fight is until we get the exit and that is why we must reactivate the street,” said Guaidó according to RT. In the middle of the conflict, it was indicated that if they could not move forward to the National Assembly, they should “wait for instructions” from the opposition deputy on an “alternate plan.”

The opposition march, which started from the Juan Pablo II square in Chacao – the place where Guaidó proclaimed himself President in 2019, had much less support than the demonstrations he summoned last year. The mobilization advanced to Chacaíto, where violent events occurred when they ran into the Bolivarian National Guard at the height of the Expreso shopping center. There, hooded men attacked the security forces with rocks and tear gas used to disperse the violence only (not like in Chile).

After that, the opposition protesters gathered in the Alfredo Sadel square in Las Mercedes. “We knew the plan of the dictatorship and we were prepared,” Guaidó said in a tweet, indicating that moving the marchers to Sadel Square was planned from the beginning.

Revolutionary protesters, meanwhile, filled Mexico and University avenues in downtown Caracas. Many carried posters against the illegal sanctions that the United States government applies against Venezuela, which have hindered or impeded the entry of foreign currency into the country and also the purchase of food and medicine.

From University Avenue, Leopoldo Herrera, one of the participants interviewed by the journalist Angie Vélez from Alba Ciudad, rejected the violent plan of the opposition to “ignore all the achievements made by the revolution in 20 years” and highlighted the level of awareness of the Venezuelan population, which the mass media tries to ignore and belittle. “The march is very big, I invite you to watch it on television or where you can see it!” he said. Arturo Cazal, a revolutionary militant who also serves as vice minister of promotion of the cultural economy of the Ministry of Culture, said that “all Venezuelans are alert to this situation that the Empire has imposed on us. This criminal blockade has really pulled us all together for a better Venezuela, that wants peace and prosperity, that wants to decide its destiny.

“Regardless of what they want to do, we are for peace,” Cazal said to culminate.

After completing the mobilization, President Nicolás Maduro expressed through Twitter that massive assistance “is evidence that the Venezuelan people are committed to peace, development and rejects the interference of the United States government, which aims to create a scenario justifying a foreign military intervention.”

Sharing a video with shots captured by drones showing the Chavista protesters gathered in Morelos Square (when the march was about to start), Maduro said that those who participated in the march did so “with a deep love for the fatherland. A clear signal to the world that Venezuela wants peace, stability and development, without interference from any empire. God bless the Venezuelan people!