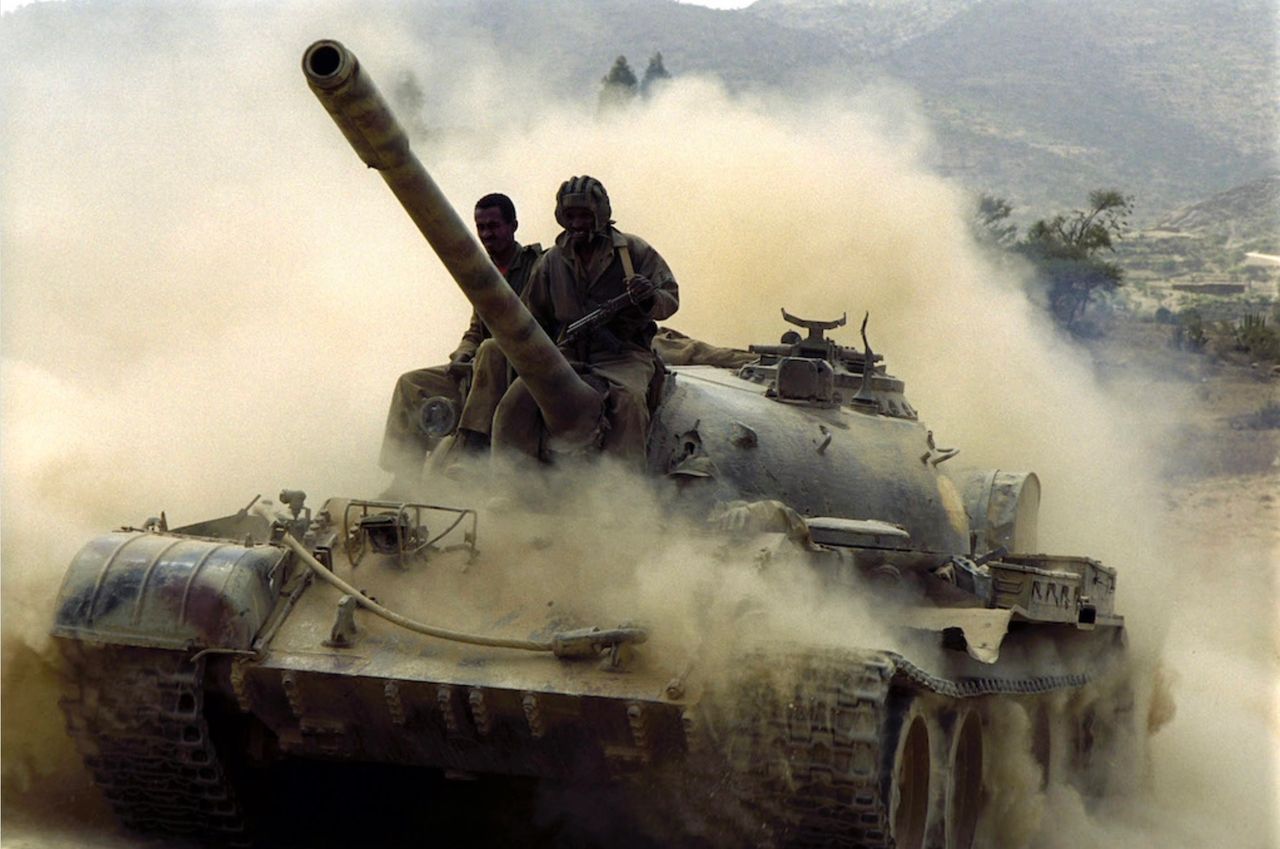 As the Western media pivots towards Eritrea and Ethiopia amid the Afghanistan occupation’s failure, a familiar set of narratives is being propagated. These narratives are familiar for anyone who’s researched the encyclopedia of lies and hoaxes which have made up the West’s portrayals of the war in Syria, wherein Assad has been accused of numerous chemical attacks that have later been debunked. Or to anyone who’s researched the CIA’s atrocity propaganda against Serbia during the Balkan conflicts.

This is the type of deception that feeds off of a grain of truth, should that grain even exist. That takes real atrocities a given government might be committing (with Eritrea and Ethiopia’s neoliberal regimes indeed being guilty of many abuses over the decades), then exaggerates them in such a way that the genuine contradictions within these places can’t be properly addressed. All that prevails is imperialist destabilization and partition. When the CIA is running wild in a country with its psyops, fabricating stories that justify Washington’s proxy warmongering, the forces of class struggle are deprived of the opportunity to actually improve the conditions of the masses. This happened in Yugoslavia when the contradictions of the nation’s socialist state were exploited to carry out counterrevolution. This happened in Syria when the efforts of the country’s genuine reformers were ruined by Washington’s incitement of a jihadist civil war. And the same thing is happening in Eritrea and Ethiopia.

The CIA-tied Washington Post is telling us that the US sanctions against Eritrea are not just “overdue,” but “incomplete.” A moral judgment that’s reprehensible from an authentically humanitarian perspective; sanctions are designed to kill civilians, especially when directed against a country that’s undergoing an expanding hunger crisis.

RELATED CONTENT: US Escalates Threats to Ethiopian and Eritrean Sovereignty

Human Rights Watch, the known regime change propaganda outlet with ties to the U.S. government, has been charging the Ethiopian government with widespread abuses against Tigrayans. These accusations, which have been getting predictably hyperbolized by the imperialist media, leave out crucial context; as Ethiopia’s attorney general Gedion Timothewos has said in response to HRW’s report:

The TPLF has legitimately been designated as a terrorist organization by our parliament. Anyone who supports, provide material assistance or sponsors this kind of organization would have to be held accountable. The TPLF happens to be an organization organized along ethnic lines, so most of its supporters, most of its financiers happen to be, not all of them, but most of them, happen to be from one ethnic group. So sometimes, some outsiders might not understand this context… and the challenge. I understand where that is coming from but they have to understand the environment within which we are operating.

This fact doesn’t automatically disprove all the atrocity stories, but it shows the highly suspect way in which HRW and other imperialist NGOs are framing the conflict; namely, in a way which can protect the Tigrayan People’s Liberation Front and uncritically promote its narratives. Again, we see how the grains of truth get exploited and weaponized, in this case for decidedly anti-humanitarian purposes.

The NGO industrial complex’ bias is made all the more suspicious by the Western media’s efforts to ignore or downplay the easily provable crimes of the primary entity these authorities are fighting. The TPLF, despite looting and hoarding food, being known to regularly commit war crimes across the Afar and Amhara regions, using the sabotage of essential services during a famine as part of its central insurgency strategy, and having started its campaign of violence during last year’s harvest season to deliberately exacerbate the humanitarian crisis, is having its atrocities be obfuscated by the imperialist media at every opportunity.

The US still doesn’t even classify the TPLF as a terrorist organization, despite USAID having recently found out about its efforts to deprive the masses of food. The hoarding scandal casts doubt upon the foremost among Washington’s accusations against both Eritrea and Ethiopia: that these countries have been trying to suffocate those within the rebel-controlled areas via food blockades. Not only has this charge been baseless and contradicted by history when it’s been directed towards Eritrea, but it’s now been shown to be misleading when applied to Ethiopia.

If USAID (the organization that’s been leveling the accusations) has been having its aid go to TPLF warlords who brazenly misuse these resources, in addition to the TPLF’s regular ambushing of aid trucks, the Ethiopian government is justified in applying tight checkpoints and other security measures. Washington has enabled a humanitarian crisis facilitated by proxies and sanctions, then made out the responses from Eritrea and Ethiopia to be the source of this crisis.

RELATED CONTENT: Africa’s Ever-Deepening Imperialist Hell, and the Revolutionary Movement that can End it

Large international media outlets, such as the AFP, continue to recycle baseless, specious allegations [against the Eritrean and Ethiopian governments] without minimal scrutiny, confirmation, or validation. Interestingly, after spurious allegations are raised, they are never subjected to follow-up or retraction, clarification, or correction, which in itself is newsworthy and merits serious investigation. Regrettably, it seems that statements and claims from some in the region, no matter their alignment with reality, are not merely assumed false but are totally dismissed, rejected, and ignored. By stark contrast, only the assertions from remnants of TPLF are to be considered as objective truth and disseminated uncritically.

Those of us who’ve studied the deceptions of the imperialists—especially when it comes to countries the imperialists aim to Balkanize, partition, and destabilize—have seen this all before. We’ve seen how disinformation gets propagated, ideally by “humanitarian” organizations like the White Helmets. How these organizations get used as fronts for assisting the atrocities of Washington’s proxy terrorists—whether these terrorists are the Syrian jihadists who’ve received direct help from White Helmets members, or the TPLF warlords who’ve starved the people with USAID’s complicity. How the media consistently twists the story to make the targeted governments look as bad as possible, while ignoring or even glorifying the crimes of the US proxies; throughout the Syria regime change war, Washington came to cheer for the jihadists.

As Eritrean American antiwar activist Elias Amare has assessed, the same coddling treatment is being applied to the TPLF, even as it’s now been undeniably revealed to be exacerbating the famine:

The TPLF are criminals who must be brought to justice. Many of their leaders have already been apprehended, but some remain in Tigray or on other battlefronts. The government forces withdrew from Tigray and declared a unilateral humanitarian ceasefire in June, but the TPLF continued to fight and encroached further beyond its home base into the Afar and Amhara Regions. They are continuing to commit atrocities against the civilian population. In the West, the crimes of the TPLF are hidden or glossed over, while the Ethiopian government and army are the targets of a massive media disinformation campaign. The Western corporate media is incredible, outright brazen in the way it continues to manufacture stories of massacres and rapes and what have you, the same way they did in Libya and in Syria, where they manufactured the White Helmets, chemical weapons attacks, and what have you. The pattern is the same and it continues.

Anti-imperialists must do the intellectual work of recognizing that Eritrea and Ethiopia can at the same time have serious contradictions which need to be addressed, and be targets of a CIA disinformation campaign. A campaign whose goal is to prevent the victory of the proletarian revolutionary movement within these countries, and to make their future consist only of starvation, perpetual war, and continued breakdowns of basic social services.

Featured image: A tank in Tigray, Ethiopia, where TPLF, backed by the US, is waging a civil war against Ethiopian minority groups. File photo.