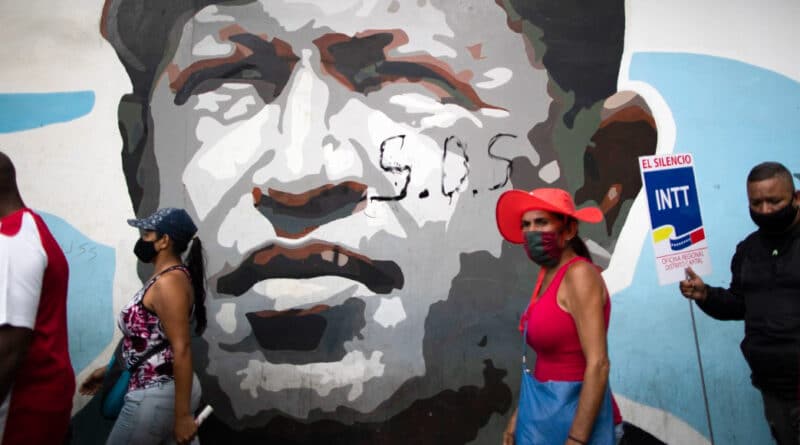 It is not clear why the embassy decided to go back and delete its posting history, especially as undermining Venezuela’s elections continues to be the official line of the US government.

The United States embassy for Venezuela has been caught deleting tweets undermining the integrity of the December 6 National Assembly elections in the country and calling on Venezuelans not to participate in them.

“Tomorrow in Venezuela there will be no elections but rather a fraud carried out by the illegitimate Maduro regime. The world is watching. And Venezuelans are organizing to report it. Are you ready to defend democracy? I don’t vote on December 6,” one tweet read, linking to a website purporting to track election irregularities.

The concept of “defending democracy” has been one commonly employed by the opposition during their many coup attempts on the government, dating back to 2002.

The deletion was spotted by Adrienne Pine, Associate Professor of Anthropology at the American University in Washington D.C. and one of 300 foreign election observers who oversaw the contest earlier this month.

Gee, I wonder why the phantom US embassy in Venezuela is deleting tweets in which it calls for Venezuelans to not participate in their own national elections and claims the election will be a fraud before it occurred and without any evidence.https://t.co/3CnEihC0EJ pic.twitter.com/oQXYm5M2mU

It is not clear why the U.S. embassy decided to go back and delete its posting history, especially as that continues to be the official line of the United States government. Accusing Venezuelan President Nicolas Maduro of “brazenly rigging these elections,” Secretary of State Mike Pompeo described the contest as “a political farce intended to look like legislative elections.” “The United States, along with numerous other democracies around the world, condemns this charade which failed to meet any minimum standard of credibility,” he added.

But the American position is disputed by the international observers, including Pine herself, who was impressed by the level of election security. “It was really amazing to see it firsthand. There are so many fail safe measures in the system to ensure that there can’t be fraud that I was just blown away,” she said on the latest edition of the MintCast, MintPress’ video podcast. “COVID security measures were completely integrated into the electoral process itself,” she added.

The Council of Latin American Electoral Experts, who also oversaw the vote, verified the results, noting the “increased citizen confidence in political organizations and candidates.” A number of former heads of state, including those of Ecuador, Spain, Honduras, and Bolivia also attested to the process’s veracity.

The election saw the ruling socialist coalition sweep up 253 of the 277 seats on offer in the National Assembly (comparable to the U.S. House of Representatives), amid a partial opposition boycott of the process encouraged by the U.S. government. Calling for mass abstention, many opposition parties essentially ensured that the government would win big, but were hoping to delegitimize the process altogether through a painfully low turnout. Turnout was 31 percent, low, but not low enough to prevent the socialists from declaring a decisive victory. Thus, without control of any branch of government, the opposition’s only hope of coming to power in the near future remains through directly ousting the current government.

The embassy, like the government in Washington, continues to support the self-declared president of Venezuela Juan Guaidó, despite his lack of office. Guaidó held his own “people’s vote” at the same time as the election, promoting voting in person, online, or by phone in his referendum. The U.S. endorsed the results, despite non-Venezuelans outside the country showing they could bypass safety features and vote online themselves.

Despite unwavering American support, others in the opposition, such as two-time opposition coalition presidential candidate Henrique Capriles, are calling on the U.S. to rethink their backing of a figure with such low public support inside the country. “The new administration has to understand that this plan has run its course and it cannot keep the status quo: the [Guaido] ‘interim presidency,’” he told the BBC.

The embassy calls itself “virtual” because it is not physically located in Venezuela, but in neighboring Colombia, a close U.S.-ally. The U.S. had no ambassador to Venezuela from 2010 until November this year, and no representatives inside the country at all of late, amid worsening relations and multiple attempts to overthrow the Maduro administration led to the expulsion of U.S. diplomats. Last week, President Ivan Duque of Colombia admitted that he had a hand in helping opposition leader Leopoldo Lopez, kept under house arrest for his role in a 2014 coup attempt, escape to Colombia. The U.S. also faced scrutiny after supporting the now-infamous “Bay of Piglets” attempt by ex-Green Berets to carry out an amphibious landing from Colombia and shoot their way into the presidential palace. If a low level mercenary invasion proved ineffectual, a few tweets will likely not work in removing Maduro from power.