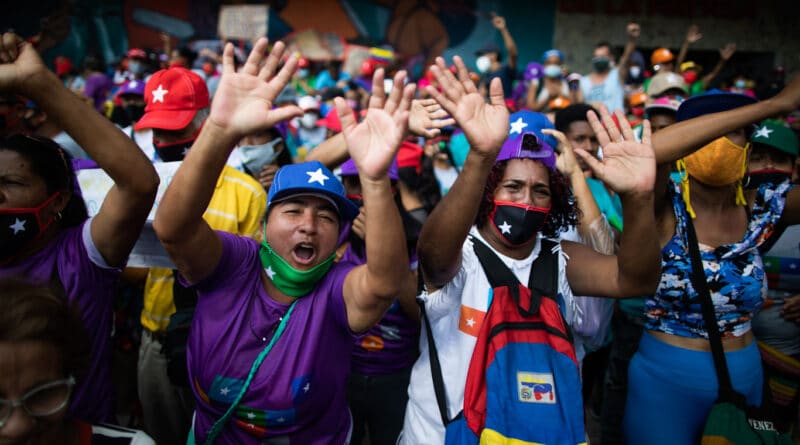 Despite the fact that the election was overseen by over 4,500 international observers, US pols and media pundits alike labeled it a sham before it even took place.

President Nicolas Maduro and his United Socialist Party of Venezuela (PSUV) are celebrating today, after a clear victory in yesterday’s National Assembly elections. The elections, boycotted by many major right-wing opposition groups, but still participated in by over 100 political parties, ended with the PSUV and its allies receiving an estimated 67.6% of the votes cast, meaning they will control a two-thirds supermajority of the 277-seat National Assembly, the only major body that was controlled by anti-government forces.

“We have recovered the national assembly with the majority vote of the Venezuelan people,” Maduro said in his victory speech. “It’s a great victory without a doubt for democracy,” he added, also announcing that the government had delivered the 3.3 million houses for the needy that it promised when it launched the Great Venezuelan Housing Mission program in 2011.

Self-declared opposition president Juan Guaidó, a former leader of the National Assembly himself, did not see the result in the same way, seemingly calling for another coup on Saturday. “The rejection of the regime and its fraud united us, now we must respond in the street. December 12 will mobilize us like the immense majority of us who want to choose their future,” he announced on social media.

Yet even his backers in the Western press fear the result has neutralized him. The Guardian, for example, wrote that yesterday’s events “deal a further blow to Guaidó’s flagging crusade,” quoting bitterly anti-Maduro figure Phil Gunson, who said that “the coalition around Guaidó is really crumbling.”

Turnout in the election — 31% — was considerably lower than the PSUV was hoping for, although perhaps understandable, given the continued boycott of much of the opposition (meaning the outcome was barely in doubt), the COVID-19 pandemic, the crippling U.S. sanctions — which included those imposed on opposition figures that defied U.S. instructions not to participate in the election. Nevertheless, pro-government figures will be disappointed with the figure.

What is not in doubt is the veracity of the election itself, which was overseen by 4,500 international observers, including many former heads of states, including Fernando Lugo of Paraguay, Evo Morales of Bolivia, and Jose Luís Zapatero of Spain. “Here in Venezuela nobody can doubt the electoral system,” said former Ecuadorian president Rafael Correa, who agreed with former Honduran president Manuel Zelaya’s assessment that the process was “transparent and peaceful.” Other official observers included MintPress contributors Professor Adrienne Pine and Dr. Margaret Flowers.

Despite this, the United States government had already decided that the process was a fiction. “Venezuela’s electoral fraud has already been committed,” said Secretary of State Mike Pompeo. “The results announced by the illegitimate Maduro regime will not reflect the will of the Venezuelan people. What’s happening today is a fraud and a sham, not an election.” Zelaya — who was overthrown in a coup supported Pompeo’s predecessor, Hillary Clinton — fired back, claiming that the U.S. had “no moral high ground” to criticize events in Venezuela. “They ought to be here as observers,” he added.

Venezuela's electoral fraud has already been committed. The results announced by the illegitimate Maduro regime will not reflect the will of the Venezuelan people. What's happening today is a fraud and a sham, not an election.

Corporate media, who reflexively take the U.S. government’s side on Venezuela, did their level best to undermine confidence in the process when reporting on it. “Maduro consolidates power in Venezuela, dominating election boycotted by opposition,” ran the Washington Post’s headline. “Venezuela’s Maduro tightens grip as opposition boycotts elections,” wrote the Wall Street Journal. Human Rights Watch’s Ken Roth, who supported the far-right coup in Bolivia last year that removed Maduro’s democratically-elected ally Evo Morales, also rejected the election as “a theater piece meant to lend a veneer of legitimacy to the government of Nicolas Maduro.”

Media was also not above simply printing demonstrably fake news, either. Local opposition outlets insisted that turnout was below 20%, a canard reprinted in major Western sources. One-upping them, Geoff Ramsay of the pro-coup Washington Office on Latin America, perhaps Western media’s most quoted “expert” on Venezuela, claimed that turnout was only 15%. Meanwhile, Bloomberg’s Venezuela Bureau Chief Patricia Laya went furthest of all, insistingthat participation stood at only 10%. A similar phenomenon of attempting to wish something into being by lowballing turnout occurred in the 2018 elections, also boycotted by much of the opposition.

From 23 de Enero to Petare, voting centers remained largely empty across Caracas on Sunday. Staff stood idly, with participation near 10% at most centers we visited: https://t.co/cgbdZ7I5s4 @AlexVasquezS

Concern over low participation rates appeared not to extend to U.S. ally and NATO member Romania, however, the Eastern European state also held elections yesterday, finishing with a turnout of 30%. Unlike with Venezuela, there was no outcry from the White House, nor any condemnation from corporate media, suggesting that the response had more to do with who was winning the elections, rather than what turnout figures say about the quality of democracy.

Ultimately, however, while turnout was relatively low, the ruling socialist party has gained a supermajority in the one body the opposition-controlled, handing them a clear victory and the U.S. government a defeat. Added to the return of democracy to Bolivia in October and a leftist election victory in Guyana earlier this year, 2020 has not been a good year for Washington in Latin America.