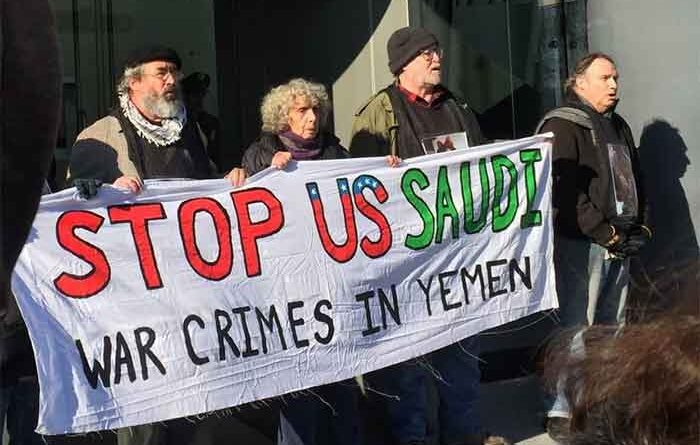 The battle for Marib is escalating. The city, which hosts over two million civilians—including an estimated one million internally displaced persons (IDPs)—is the last military stronghold of Abdrabbuh Mansur Hadi’s government in northern Yemen. Uprooting the government from Marib would help Houthis access the governorate’s important oil and gas resources and position them for a push south into Shabwa and east into Hadramawt, toward Yemen’s other oil and gas fields.

Houthis launched their first attack on Marib on February 7, 2021. The battle was fought along three frontlines. In the north, fighting broke out in Al-Yatma, in neighboring Al-Jawf governorate near the Saudi-Yemeni border while clashes in the south centered in Marib’s Al-Abdiyah district. The main thrust of the offensive was in Sirwah, western Marib, where Houthi forces advanced to Kofal camp, the most important military base of the Hadi government in the district.

From there, the Houthi forces pushed forward to the borders of Al-Zour. However, the Houthis had not been able to secure the right flank at Kofal camp. Government forces retained control of these regions, from which they targeted Houthi fighters near Kofal camp, and the area up until the borders with Al-Zour. The Houthis also failed to seize the strategic Al-Kasara area to the north despite increased attacks.

Amid the renewed conflict in Marib, US Special Envoy for Yemen Tim Lenderking has been spouting hackneyed imperialist fabrications. On April 21, 2021, he said, “Iran’s support to the Houthis is quite significant, and it’s lethal… What I see is continued aiding and abetting an army of Houthis by the Iranians so that they can continue attacking Saudi Arabia, and unfortunately those attacks have risen quite strongly in the last couple of months.”

Lenderking’s statement may seem superficially plausible because it neatly ignores the historical context to the rise of Houthis. Far from being mere “proxies,” the Houthi movement is an instance of anti-imperialist resistance against the murderous machinations of the American empire and its reactionary stooges.

Arab spring
In 2011, slogans of Arab Spring reverberated loudly in the streets of Yemen. Protests in the country initially focused on the country’s economic situation and high levels of unemployment. But following the overthrow of Hosni Mubarak in Egypt, the demonstrations grew to encompass a wider sense of anger and frustration with the 33-year reign of the country’s president, Ali Abdullah Saleh, who was widely believed to be preparing to hand power over to his son, Ahmed Abdullah Saleh.

As this control over the country’s political and economic levers expanded, particularly in a context of declining oil production since 2001, rival families (notably the al-Ahmar family) and important sections of the country’s two largest tribal federations (the Hashed and Baqil) felt increasingly excluded from accumulation opportunities in Yemen.

By the end of February 2011, many of these different groups had come together in protests numbering over one hundred thousand. Through March and April, Saleh responded to the growing mobilizations with violence—including unleashing pro-government militias that shot dead at least forty-five people at a demonstration on March 18.

Clashes continued through May and June between opposing army factions, tribal groups, and protesters—culminating in an assassination attempt on Saleh on June 3 that left the president severely injured and forced to fly to Riyadh in Saudi Arabia for treatment.

Despite much speculation that he would step down, Saleh eventually returned to Yemen in late September. Following two more months of mass protests, armed rebellions, and defections from the military and his ruling party, Saleh agreed on November 23 to transfer power to his vice president, Hadi, in return for immunity. The end of Saleh’s rule, however, did little to seriously address the problems faced by the country.

Unlike in Tunisia and Egypt, where mass protests had left leaders with little choice but to relinquish power, the political transition in Yemen was largely steered through a deal brokered by the Gulf Cooperation Council (GCC) with the country’s elite. Saudi Arabia, which negotiated with Saleh and his supporters, and Qatar, which has a strong relationship with the country’s main opposition party known as the Islah Party, both hold a major influence over the country’s politics.

As a result of the deal, Yemen’s elite remained largely unchanged, with the same few families and tribal groups controlling the country’s resources, patronage networks, and political structures. Prominent military leaders of the Saleh regime continued to hold the same positions under the new regime, including the former leader’s son, Ahmed Saleh.

Moreover, the US used the transition to deepen its military alliance with the Yemeni government; US drone strikes killed more than 110 people in Yemen in March 2012, the month following the election of al-Hadi. The essential continuity in the regime’s foreign alliances and political structures drew the battle lines for Yemen’s social movements.

Hadi and his American/Saudi/Qatar benefactors gave free reign to armed groups linked to Muslim Brotherhood affiliates. Partnering with trusted members of the US-trained special units in the Yemeni army, foreign fighters and local loyalists actively chased down and murdered Yemeni leaders hostile to the imperialist project they and Hadi’s government were charged to impose.

Taking advantage of popular discontent with the Hadi government’s neoliberal economic policies and its inability to affect any significant societal changes during the period of transition, the Houthis stormed the country’s capital in September 2014.

Hadi fled to Aden and appealed to Riyadh and Abu Dhabi for military assistance. Saudis and Emiratis assembled an alliance of Middle Eastern and African states acting in the name of Hadi’s government—exiled in Riyadh. The first Saudi air strikes were launched on 26 March, 2015.

For Saudi Arabia and its allies, the destruction of the Houthi-led movement was necessary in order to dominate Yemen’s natural resources, and control its strategically important locations. The resistance of the people of Yemen to structural adjustment, austerity and subjugation to the imperialist financial system could not be tolerated.

Whilst different class interests are lined up behind the Houthi banner, the movement is made up of Yemenis refusing to accept foreign domination and occupation, and is currently united in the fight for national sovereignty.

Western support
The US and the European Union (EU) wanted to keep the Bab el-Mandeb Strait in Yemen open for oil transit since millions of barrels pass through it daily. Thus, they made a deal with the Saudis to lead a fraudulent coalition to fight the war for them, showering military advice, intelligence support, and precision-guided armaments on their forces.

The majority of the human misery in Yemen results from the actions of the Western-backed Saudi-led coalition. Every conceivable aspect of food production, storage and water treatment has been targeted by fighter jets, tanks and armored vehicles marked with the Saudi flag but manufactured in America, UK and Canada.

In hypocritically denouncing the Houthis, Lenderking forgets that Saudi pilots trained by Americans fly American aircraft and drop American bombs, while American technicians service and keep the planes in the air. American contractors also upgrade the classified software on the planes, including the targeting software.

Saudi Arabia would be unable to launch air assaults on Yemen without American support and cooperation. The level of Saudi dependence on Western weaponry and maintenance makes the continuation of the war, to a large extent, an American decision.

Since the beginning of the conflict in Yemen, the US has provided Saudi Arabia with intelligence, refueling sites for Saudi warplanes and weapons. In 2018, 40 children on their way to a school field trip were killed by a Saudi airstrike. The bomb used in the airstrike was supplied by the American military-industrial giant Lockheed Martin.

Before performing his role as an imperialist prevaricator, Lenderking should try to reflect on the fact that 25% of the casualties in the past three years of the war in Yemen have been children. The need of the hour is to bring an immediate halt to the destruction of Yemeni lives. Unfortunately, Lenderking has failed to understand this.