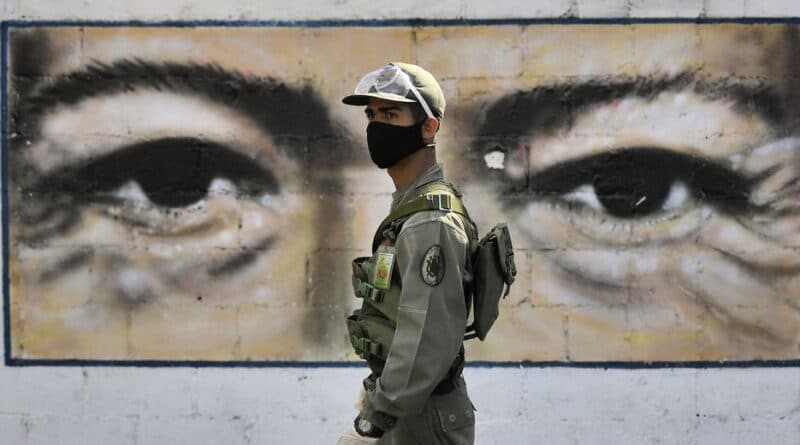 The media establishment was horrified when the “Stop the Steal” mob stormed the US Capitol on January 6, and the sentence was swift: President Donald Trump, with his baseless fraud allegations and refusal to concede defeat, was responsible for the mayhem.

Venezuela’s December 6 parliamentary election offers an instructive case study, with corporate journalists unquestioningly repeating Trump officials’ unsubstantiated allegations of “fraud” there at the same time that they debunked Trump’s virtually identical claims vis-a-vis the US election. And the right-wing violence that was rightly portrayed as a threat to democracy in the US was heartily endorsed as a democratic campaign in Venezuela, where it served Washington’s foreign policy goals.

The media’s uncritical echoing of fraud allegations is in turn used to justify the continuation of Washington’s regime-change policies. Early signs point to this dynamic continuing in full force under the new Biden administration (Reuters, 1/19/21).

NPR: Maduro Allies Set To Win Back Venezuela’s Congress In Vote Boycotted By Opposition
NPR ( 12/5/20) allows opposition politician Juan Guaidó to claim to be the rightful president of Venezuela “because Maduro’s 2018 reelection was rigged”—no evidence necessary. 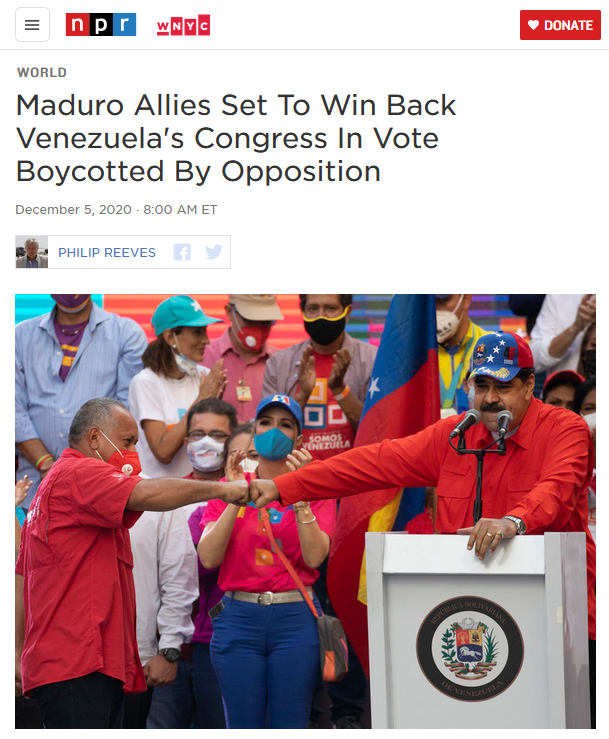 Venezuela’s parliamentary elections on December 6 followed a familiar pattern: The US-backed opposition boycotted the vote, and the ruling United Socialist Party (PSUV) and allies won an overwhelming majority. Just like in President Nicolás Maduro’s 2018 reelection, opposition candidates failed to counter their hardline sectors’ calls for abstention, and the government scooped some two-thirds of the vote, albeit with a depressed turnout.

“National Assembly President Juan Guaidó and his allies declined to seek reelection, saying they didn’t trust the authoritarian [Nicolas] Maduro to hold a fair vote,” the Washington Post (12/7/20) noted, throwing in a smear against Venezuela’s head of state for good measure.

For all the quick trigger adjectives, reporters made no effort to explain how Venezuela’s voting system works (and why vote rigging would be very far from straightforward), much less what this “fraud” consisted of. This stance is hardly new, with coverage looking like a rerun of previous Venezuelan elections (New York Times, 8/16/04; Washington Post, 11/22/15, 5/10/13)—most recently, the 2018 presidential election, which the Trump administration preemptively refused to recognize months in advance, with unanimous support from politicians and corporate pundits of all political stripes (NPR, 5/21/18; BBC, 5/21/18; Reuters, 5/20/18; Bloomberg, 5/7/18; Miami Herald, 5/2/18; New York Times, 5/17/18).

The latest round of pliant stenography on Venezuela stood in stark contrast with the media’s almost instantaneous dismantling of the domestic “fraud” accusations hurled by Trump and his allies about the US’s 2020 presidential vote. While conservative outlets afforded the president some leeway, centrist and liberal corporate journalists were steadfast in factchecking Trump’s “baseless” claims (Guardian, 11/6/20), “torrent of falsehoods” (New York Times, 11/5/20) or “false claims of vote fraud” (Washington Post, 11/5/20). Venezuela observers would be forgiven for wondering where this sudden quest for “evidence” of electoral fraud had come from.

Similarly, Trump’s allegations that his victory was stolen were immediately picked apart as “desperate” (New York Times, 12/26/20; Washington Post, 12/8/20), but Trump officials can routinely claim that Maduro “stole” the 2018 election  (Financial Times, 12/6/20; France24, 12/7/20) with no dissent from corporate journalists.

The Trump administration began spinning its fraud stories in Venezuela and at home long before polls opened in either country.  But in the US, Trump was confronted about the lack of evidence surrounding his pre-election claims of mail-in vote irregularities (AP, 9/30/20; Reuters, 8/18/20). In contrast, no one in the corporate media batted an eye when the administration pre-emptively declared that the Venezuelan elections would be fraudulent (Reuters, 8/4/20; AFP, 9/3/20).

NYT: How Sidney Powell inaccurately cited Venezuela’s elections as evidence of U.S. fraud.
The New York Times (11/17/20) demonstrates that it does have the ability to factcheck Trumpian claims about Venezuela after all. 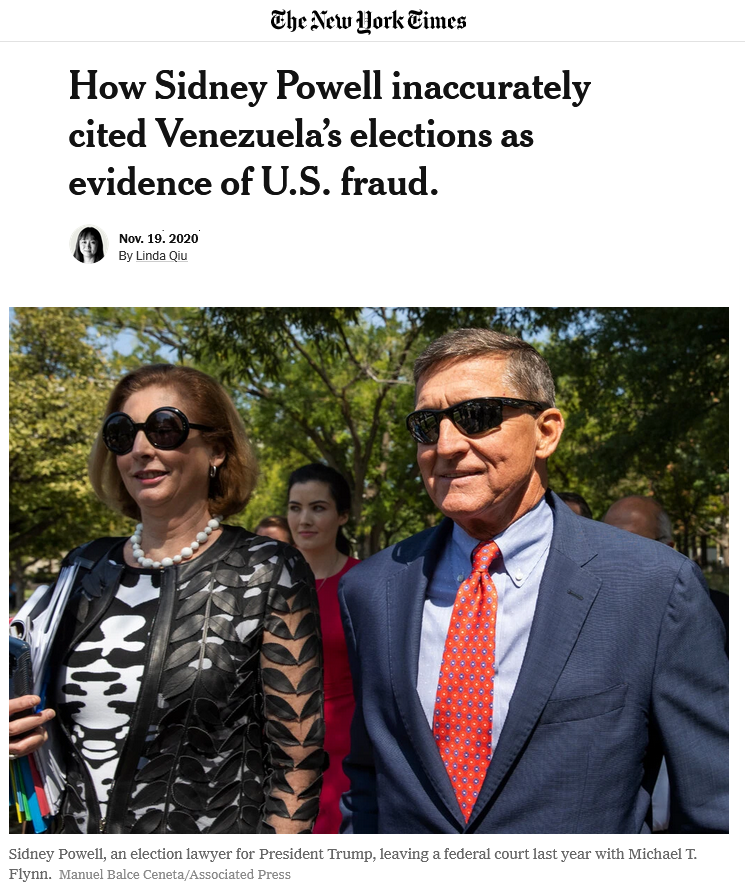 The hypocrisy concerning electoral fraud allegations was even more evident when the most unhinged members of Trump’s team tried to scapegoat Venezuela for their loss.

Trump’s private attorney, Rudy Giuliani, sought to weaponize nearly two decades of anti-Chavista media bias, this time against political rivals at home. But while friendly Fox News hosts (11/15/20) were happy to let him say that “a Venezuelan company” was counting US ballots, in reference to Smartmatic, the New York Times(11/17/20) quickly clarified that the company (which used to provide voting software in Venezuela) is based in London, and had nothing to do with the US elections.

The paper of record then wasted no time in reheating Smartmatic’s accusation that Venezuelan authorities inflated turnout in the 2017 National Constituent Assembly elections, but left out that the software company did not offer any proof to back the claim, with Venezuelan electoral authorities stressing that it did not have access to results.

However, the most bizarre conspiracy theory was floated by attorney Sidney Powell, who accused late Venezuelan President Hugo Chávez of being behind voting software used to “hack” the US presidential election (AP, 11/19/20).

Powell’s wild theory relied on screenshots of an affidavit purportedly from a Venezuelan military official claiming the US election was “eerily reminiscent” of the 2013 Venezuelan presidential election, with the New York Times (11/19/20) adding that “no evidence was provided that votes had been switched in the United States.” The paper of record failed to add that no evidence of vote switching was provided in the 2013 Venezuelan presidential election, either. 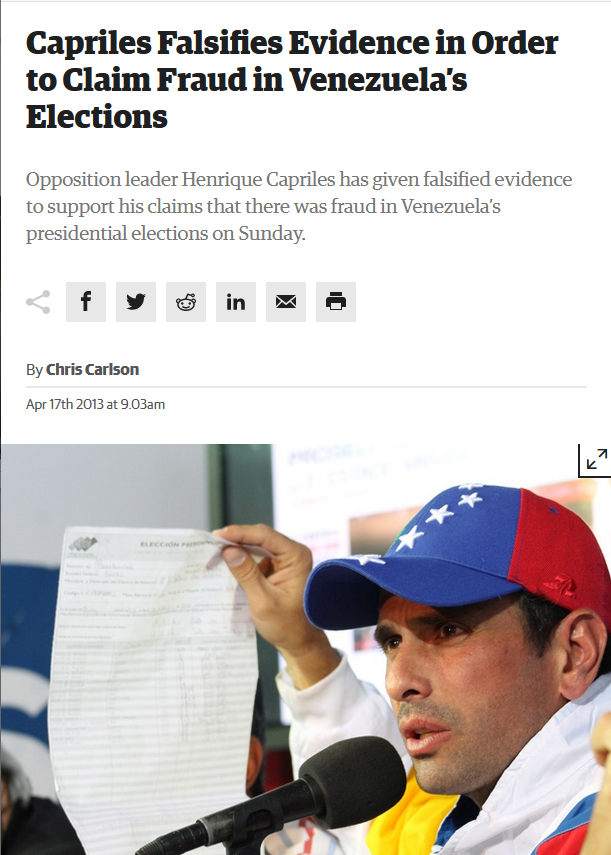 The 2013 contest, in which Maduro was elected for the first time after Chavez’s death, was followed by violent efforts to challenge the results, leaving eight people dead (Reuters, 4/17/13; BBC, 4/19/13; CNN, 4/18/13). Western outlets chose to echo the opposition’s fraud claims, championed by then–Secretary of State John Kerry, even though all the “evidence,” much like Trump’s, was easily dismissed (Venezuelanalysis, 4/17/13).

US government and corporate media backing for the Venezuelan opposition in its refusal to acknowledge defeat paved the way for deadly street violence (Reuters, 4/21/13) that was eerily reminiscent of the far-right MAGA mobs who are convinced that Trump’s “landslide victory” was stolen.

Armed and ready with the “fraud” epithet, corporate journalists could disqualify all Venezuelan elections, without the slightest interest in examining the substance behind the allegations (FAIR.org, 5/23/18; Venezuelanalysis, 6/4/18). The 2013 violence returned in much bigger and deadlier incarnations in 2014 and 2017, with the Western press happy to fall in line behind the State Department, automatically labeling violent efforts to overthrow the Venezuelan government as a defense of “democracy” (Washington Post, 5/1/13;  Guardian, 4/10/14; CNN, 4/20/17). The words “coup attempt,” which immediately made headlines and were subject of debate after the Capitol assault (Washington Post, 1/7/21, 1/7/21; New York Times, 1/7/21; Politico, 1/11/21), have been notoriously absent from the Venezuela coverage.

Beyond endorsing right-wing violence in Venezuela, the baseless claims also served to justify Washington’s violence against the Venezuelan people. Ever since Maduro’s 2018 victory, deadly sanctions have been justified by his second term being “widely dubbed illegitimate” (Reuters, 1/28/19), or his reelection considered “fraudulent” (Guardian, 8/5/19).

But in the end the imperial chickens came home to roost. Regardless of whether Trump is impeached or not, any semblance of impartiality from the corporate media has been shattered. Long used to whitewashing right-wing mobs and baselessly crying “fraud” when it favored US interests, Western pundits got a (small) taste of their own medicine.