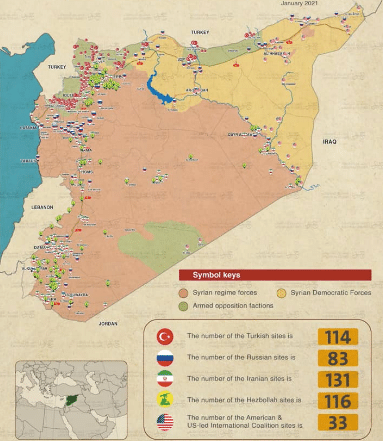 In this edition of The Debate, Press TV interviews Mark Taliano, political activist and author of Voices from Syria, who lives in Hamilton, Ontario, and international lawyer Arnaud Develay from Damascus to look at US plots in Syria, Washington’s support of the terrorist groups, and its interference in internal affairs of Syria.

Featured image: Map of Syria showing which portion of the country is controlled by which forces. The United States just happens to concentrate its army—its presence in Syria is illegal—in the north-eastern region which contains 90% of Syrian oil as the Syrian population faces a severe fuel shortage. Photo courtesy of RT.