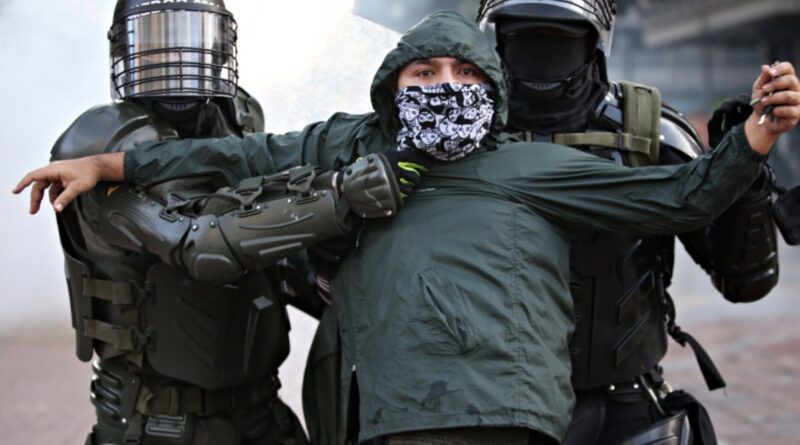 With the world-shocking acts of state violence that have been carried out by Israel and Colombia during the last two months, we’ve gotten a clearer picture of what it will look like when the “imperial boomerang” effect—where an empire’s evils abroad manifest within the empire’s own borders—fully comes to define events within the core of global imperialism the United States. In Israel, the US empire has cultivated a laboratory in necro-politics, where methods of brutal repression have been innovated to preserve the settler state in the face of unending Palestinian resistance. By giving ample military technologies and training to Colombia’s repressive forces, the Israelis have exported the findings from their laboratory to one of Washington’s most strategically important neo-colonies, which has been fighting off an anti-colonial revolt of its own.

With the intensification of class conflict in the US amid a thirteen-year-long depression, and amid an unprecedented decline in Washington’s global power throughout the last two decades, the US empire has so far fulfilled the imperial boomerang in many ways. Not only has it imported the tools of CIA propaganda that have defined US destabilization efforts abroad, used its private mercenary companies for assisting in internal repressive efforts, and quite literally brought home its wars by funneling increasingly large amounts of Army equipment from the War on Terror into its police departments, but it’s “Israelified” its internal repressive state by having Israeli forces train American police. This has led to an uptick in American police brutality due to more militarized and trigger-happy police, an increase in government-fostered disinformation throughout American society, and a consequential furthering of racial divides amid escalating state terror against colonized peoples within US borders.

RELATED CONTENT: Colombia: Analyzing the Strike from the Peoples’ Congress

If this is how bad the imperial boomerang has made things so far, imagine what the country will look like when the rest of the brutality within Washington’s global imperialist projects gets brought into our communities. To get a sense of what I mean by this, think of the very darkest chapters in Washington’s history of exporting death and destruction, the kinds of crimes that Americans tend to prefer not to even learn about. Washington’s wanton murders of civilians during the Vietnam War are one example, which is explained by the columnist K. Nazari to be applicable to Colombia’s modern situation:

In the year 1999 the Colombian government presented a new strategy in cooperation with the USA to guarantee “peace and wealth for the country.” This plan is still running today. The program has the name ‘Plan Colombia’. It was officially designed to combat the drug business but in fact, it was aimed at fighting insurgencies, especially the FARC-EP. During the birth of Plan Colombia, the guerilla was so overwhelmingly strong that the Colombian military could not even defend major cities from the FARC guerilla. The rebels took control of village after village and the threat of the FARC taking control of city after city was real. The Colombian military was desperately in need of money and expertise. Fortunately for them, when it comes to fighting communists, the USA has no morals and does not hesitate. They align with anyone, even with a de facto narco-state.

The parallels between the US military’s genocide against the Vietnamese and the US-backed Colombian narco-state’s war against political undesirables are clear. In fact, a Colombian court described what this state did as a “political genocide,” where 6,000 people were killed from 1984 to 2002 alone for simply associating with Colombia’s communist movement. Through murder, torture, forced displacement, and other human rights abuses, the regime—fittingly with the help of some of Israel’s most decorated spies—created a precedent for the similar atrocities that are now taking place within the country. One which has remained relevant to Colombia’s fascistic political culture amid the dirty war against communist guerrillas that it’s been waging since Plan Colombia began.

The arbitrary arrests, extrajudicial executions of protest leaders, torture, sexual abuse of prisoners, mutilations, disappearances, massacres of protesters, use of helicopters to shoot unarmed civilians in broad daylight, assassinations of journalists, and bounties on protest medics that the Colombian government has been carrying out in coordination with the country’s paramilitaries during the last two months are all rationalized as essential for a broad-reaching “counterterrorism” effort. One which seeks to label all facets of opposition to the government’s free market fanaticism, whether human rights organizations or labor organizers or indigenous liberation fighters, as part of an all-encompassing conspiracy perpetrated by narco-criminals and foreign governments. “Castro-Chavismo” is how this supposed foreign subversion threat is often described.

By treating all who challenge the regime’s agenda as assets in a terrorist plot, the regime can claim that it isn’t committing any real war crimes by applying the proportions of force that it does, parallel to how Israel falsely claims that its frequent bombings of children and other non-combatants in Gaza aren’t actually war crimes because these individuals are supposedly “human shields” for Hamas. The language from the Israeli military and Zionist propagandists, which consistently labels all facets of Palestinian society and Palestine’s diverse resistance movement as “the Hamas,” is another way that Israel’s methods for crushing freedom have been exported to the country which Hugo Chávez described as “the Israel of Latin America.”

RELATED CONTENT: ‘The Hamas’ Are Coming: A View of the Violence from Inside Israel

In Colombia, this Zionist technique of blankedly responding to all opposition as “terrorism” both in military doctrine and in rhetoric has taken the form of Uribismo, the ideology that’s attributable to Colombia’s still influential ex-president Álvaro Uribe Velez. During these protests, Uribismo’s goal of stamping out opposition to neoliberalism at all costs has manifested in Uribe’s theory of the “dissipated molecular revolution,” a convoluted and confusing framework which best I can discern posits that a hypothetical socialist revolution needs to be destroyed on a molecular level. This thorough suppression campaign naturally calls for the stigmatization and violent disassembly of every group which in any way challenges Colombian neo-colonialism and settler-colonial capitalism.

The “dissipated molecular revolution” has been getting proliferated within police, the military, and paramilitaries by Alexis López Tapia, the self-professed neo-Nazi who’s been providing Colombia’s law enforcement with the intellectual framework for how to understand the protests and how to try to break the strike. As one Colombian radio journalist has written, the consequences of the lies of Uribe and Tapia are truly Nazistic, with these far-right conspiracy theories serving to justify a dictatorial order under the guise of Colombia’s “liberal democracy”:

“Resist Dissipated Molecular Revolution: prevents normality, scale and cup”, wrote [Uribe] on May 3 on Twitter, as a message in the form of a secret code. The country immediately began trying to decipher the cryptic concept. “Do you want to talk about molecular revolution or do you want to talk about national socialism?” I ask defiantly, the promoter of the concept currently in Colombia, the Chilean Alexis López, in an interview with a Colombian radio station. Designated in Chile as a neo-Nazi in 2000, López is a far-right entomologist who does not speak of Pinochet as a dictator but as the man who prevented “us from falling into a totalitarian state of a socialist character.” Author of articles as “How many Soviets are there in Chile?” Or ”Students or violent: aren’t they the same?” It is not a voice that is taken seriously in the south of the continent.

Doesn’t this all mirror the claims from the American right we’ve seen during this last year about the Black Lives Matter protests being the products of “outside agitators,” or about Antifa secretly being some kind of cohesive organization that’s led by “globalists” like George Soros? This demonization of an organic movement against racialized police brutality as a manufactured subversion effort by malign and powerful forces is a prelude to when the full brutality of Zionism and Uribismo will get brought into US borders. The US ruling class is already readying its internal repressive forces not just for greater police violence, but for right-wing paramilitary massacres and military invasions of major US cities. When this state terror campaign comes for us, it will be rationalized with an Americanized version of “dissipated molecular revolution.”