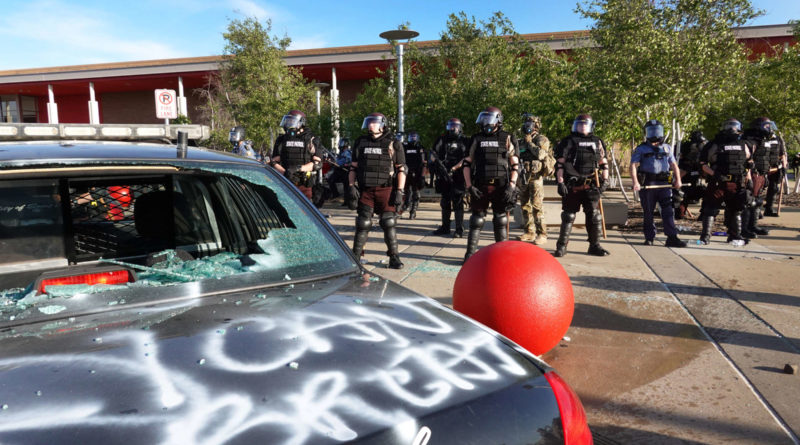 This morning the president of the United States threatened state-sanctioned murder in response to “looting,” laying bare the way in which white supremacy, capitalism and the state work together to violently repress people who defend Black life.

But Trump’s angry outburst is not the only blatantly racist response we should be interrogating. We also must confront the way in which both conservatives and liberals have responded to the Minneapolis uprisings by condemning “looting.”

Protesters in Minneapolis and around the country are rising up against a lynching and state violence. How should we respond to a lynching? Should our goal simply be to publicize it, in the hope that such publicity will generate condemnation and prevent future lynchings? This logic is flawed, in part, because lynchings thrive off of spectatorship. For white supremacists, the act of killing is also an act of fellowship and opportunity for indoctrination.

Simply spreading images of racist killings and asking the state to stop killing us is not going to stop them. (In fact, while it’s important to publicize the fact that these killings are occurring, sometimes the spread of such images also galvanizes white supremacists.)

And so, for some who oppose racist killings, watching the videos, waiting to vote, and marching in protest feels like enough. But for others, more intervention is needed. The murder of George Floyd by Minneapolis police comes on the heels of the killings of Ahmaud Arbery in Brunswick, Georgia, and Breonna Taylor in Louisville, Kentucky. These killings were committed by current and former law enforcement. Understandably, outrage is growing.

We should expect uprisings. We should expect property to be damaged, as people rise up against the racist systems complicit with racist violence. Many of the people taking part in these revolts have decided that respecting property is not more important than respecting Black life. There is an awareness that if the law doesn’t respect Black life, then the law itself cannot be relied on for protection or given undeserving respect. So, as protesters are being accused of “looting” and “rioting” in Minneapolis or anywhere else, this time demands that we reflect on the systematic robbery of Black America.

Corporations in the United States, again, have walked away with an unprecedented and astronomical amount of money in 2020. With no accountability in sight, there was little to no opposition to their monumental robbery. They were handed trillions. Politicians working in service to the corporate elite — and afraid of appearing opposed to a deal that would largely benefit Wall Street — pushed it through. Of course, the deal left many vulnerable people in the dust. No changes were made after the unresolved debt crisis of 2008 that brutalized people around the world with the starvation we know as austerity. Cuts to social needs have fallen on the public undeterred while the rich continuously grow richer than they’ve ever been.

Now, protests breaking out throughout the nation in response to police brutality foreshadow what’s to come. People are likely to take, break and fight because conditions remain miserable. It should not be surprising. Still, the “looting” by the oppressed will always be condemned more than the structural robbery that’s long taken place under capitalism.

There’s this idea that the perpetrators of crises, rather than their victims, deserve our sympathy when their profits decrease. After at least 100,000 people in the U.S. — disproportionately Black, Native and Latinx people — have died from a merciless pandemic, this absurdity is still being trafficked through the media. The corporations that do not pay people a living wage and who are benefiting from skyrocketing prices amid disaster are not deserving of pity. For those of us whose stability is much more uncertain, one missed paycheck could mean eviction, imprisonment or hunger. These circumstances are increasingly common as unemployment reaches levels not seen since the Great Depression. At least 40 million people in this country are out of work, and people in need are being effectively robbed by the rich.

Stealing because you’re being sucked dry by a system that has rendered you disposable is not the same as the ritualistic racist murders of Black people by white supremacists.

As they lose their jobs, people are also being robbed of health care — a vulnerability that will kill people and their family members. People have also been robbed of a safe place to live free from state violence, where they can breathe clean air. People have watched the tax money they paid be given away, time and time again, after being told it would come back to workers, but it never does. For Black America, there are more than enough prison beds, but not nearly enough hospital beds for a population that’s being disproportionately crushed by institutional oppression. So, of course, with little to no real infrastructure to protect people who the government has long neglected and abandoned, there will be uprisings and people will take things. They will take because of what’s been taken from them: safety, security, housing, education, food and even their ability to vote. And, of course, protesters are being robbed of the right to express their anger.

This conversation about “looting” always repeats itself. During virtually every Black uprising that has taken place and shaped this country in the last century, the narrative has remained the same. White supremacist assaults on the Black community were dubbed “race riots,” and Black protesters’ self-defense has been framed as senseless violence. People lament the destruction of property because they’ve bought into the idea that it’s another wrong being committed on top of any given white supremacist violence that caused it all. But stealing because you’re being sucked dry by a system that has rendered you disposable is not the same as the ritualistic racist murders of Black people by white supremacists. Decades of “looting” stores during uprisings can’t measure up to what Wall Street has looted through the financial crises it creates.

They are certainly aware of their crimes. Hedge fund capitalists who amass endless amounts of money through slush funds and financial manipulation have many avenues to escape accountability. As the U.S. military prepares for “civil disturbances” and buys riot gear, it’s clear they know that not all people will accept atrocity. In a nation that has never gotten past the civil war it fought over a wealthy class not giving up slavery profits, defending the wealthy is a tradition. The same people who created and currently benefit from the current crisis are intentionally mismanaging plenty of other parts of our existence.

Those interested in liberation should not condemn protesters’ so-called “rioting” and “looting.” Rather, we should be doing all we can to free the imprisoned protesters in Minnesota and wherever else uprisings occur. The robbery we should concern ourselves with is the theft perpetrated by a system that creates desperation where people in need have to go and take for themselves what should be a guaranteed right. Capitalism encourages thievery from the top down. Writing about the Haitian Revolution, the great writer C.L.R. James once said, “The rich are only defeated when running for their lives.” It has certainly been the case time and time again throughout Black history: People have overcome insurmountable odds to claim victories. How should we answer the question, “What do we do in response to a lynching?” We must make the very system that enables it run for its life.

Featured image: Police stand guard outside of a Target store on May 28, 2020, in St. Paul, Minnesota. SCOTT OLSON / GETTY IMAGES