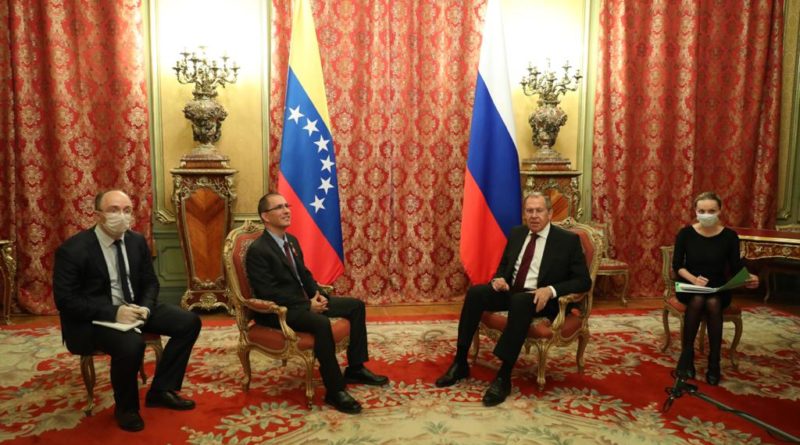 As part of the commemoration of the 75th anniversary of Victory Day in Russia and the 199th anniversary of the Battle of Carabobo in Venezuela, Foreign Ministers Jorge Arreaza and Sergey Lavrov strengthened ties of brotherhood and cooperation during a bilateral meeting that took place in Moscow.

The Foreign Minister of the Russian Federation, Sergey Lavrov, thanked the Venezuelan Foreign Minister for his participation in the events for Victory Day and confirmed that Venezuela is a friendly nation in Latin America and the world so he considers vital to consolidate strategic relations between President Vladimir Putín and Nicolás Maduro.

He reiterated his country’s solidarity with the Venezuelan people in their determination to impose their own will as a sovereign State. “We support President Maduro’s position that is aimed at national dialogue and we also welcome the agreements with the opposition to fight the coronavirus under the intermediation of the Pan American Health Organization,” he said.

Minutes after impressive parade for the Soviet victory in the Great Patriotic War, I was received by Foreign Minister Sergey Lavrov. We review our comprehensive alliance and close geopolitical and economic cooperation. Like 75 years ago, Russia is today a guarantee of world peace https://t.co/oF5eVw0yn4

Likewise, he recalled his visit to the country where he was able to verify that the majority of Venezuelans are tired of the confrontation that he described as artificial, for which he assured that the guarantees of seeking a consensus promoted by the Bolivarian government are important.

For his part, Foreign Minister Arreaza expressed his excitement at having the opportunity to witness Russia’s military capacity, as well as its strengthened identity and history.

“75 years later we have to reinforce what was built, the creation of the United Nations, multilateralism as a tool for collective decisions, to fight against taxation and domination, where Russia plays a fundamental role as well,” added the representative of the Venezuelan “peace diplomacy”.

He was grateful that on two occasions this year the Russian delegation has brought the issue of Venezuela up before the UN Security Council in the face of constant imperial aggressions. “In recent years, Russia has not only shown its willingness to defend international law, but has extended its sincere and useful hand so that we can overcome the sanctions regime and the criminal blockade that has been imposed on Venezuela.”

He also recognized Russia’s support for the political dialogue process between the national government and the different opposition factors that have generated results such as the appointment of the new electoral authorities “legally and legitimately elected and we are going to the Parliamentary Elections this year with full participation of the political parties of different stamps in Venezuela.”

The Venezuelan Foreign Minister reported that in the next few hours he will hold a meeting with the vice president of that country to review the agenda of the Bilateral High Level Mixed Commission. “We are sure that we can continue to increase our cooperation and continue expanding the sectors in which we can work together. Venezuela’s natural resources are open to Russia’s fair and legal investment and to all the scientific capabilities that Russia has developed in recent years.”

Relations between both countries advance in the areas of energy, agriculture, technology, pharmaceuticals, among other sectors.