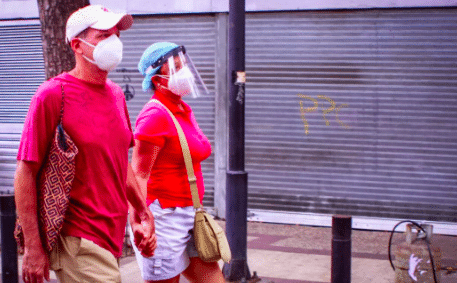 This Sunday, April 25, Venezuela marked the 406th day in the fight against the COVID-19 pandemic. In the last 24 hours, 995 new cases were registered in the country—all of them cases of community transmission, in addition to 19 deaths. This was communicated by the executive vice president of the Republic and president of the commission for the prevention and control of COVID-19, Delcy Rodríguez, in a televised meeting with President Nicolás Maduro during his customary Sunday address.

With this update, Venezuela totals 191,518 infections and 2,047 deaths from COVID-19. Among them, 15,201 cases are active at present; with 8,623 receiving treatment in government hospitals, 5,977 in comprehensive diagnostic centers, and 601 in private clinics.

The percentage of recovered remains at 91%, which is 174,240 patients who have overcome the disease. “We went back above 90%,” said the president in his address. “This is the result of the efforts of our healthcare personnel, because they do not give up.”

Community transmissions
The 995 new infections of community transmission are distributed in 18 states, informed Rodríguez. Caracas once again tops the list with 192 cases, although “the occurrence of cases has been slowing down” in the capital, she said. Yaracuy follows with 144 cases. “We were speaking to the governor, reviewing the hospital occupancy rates and giving all the support they require,” added the vice president.

Deaths
In the last 24 hours, 19 deaths was also reported, with which the country totals 2,047 deaths due to the pandemic. Of the 19, 4 were reported in Sucre, 3 in Miranda, 3 in Barinas, 3 in Lara, 2 in Anzoátegui, 2 in La Guaria, 1 in Apure and 1 in Trujillo. Starting from tomorrow, Monday, Venezuela will begin a week of easing the quarantine, as established by the 7 + 7 reopening scheme.

RELATED CONTENT: Vaccines Sent by the United States to Mexico are from Contaminated Plant

Nation on alert
Vice President Rodríguez reminded that there is still cause of high alert as South America remains one of the epicenters of the pandemic. Brazil, third in the world in the number of infections, is the first in the world in terms of fatality rate with 1,822 deaths per million inhabitants. Colombia is not far behind, with 1,381 deaths per million inhabitants, even with its evident under-reporting. As they are the two immediate neighbors, “Venezuela must maintain its shield of biosaafety and epidemiological protection on its border.”

Finally, Rodríguez reiterated that “the aim is to take care of ourselves in this week of flexibility, so that only those who are in the flexible sectors will go to work, and everybody has to continue using facemask and physical distancing.”

The president requested that the national public health system be maintained “100% active with high morale and care capacity. Nothing can fail, everything must be functioning… We must take this opportunity to expand our system.” He added that it is not easy, and the pandemic is nowhere near its end. “Nobody can give up now, nobody can get tired of taking care of themselves. There is nothing more beautiful than having a healthy family.”