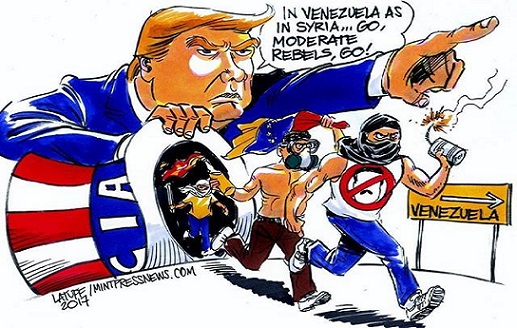 Every time the media is forced to speak positively about Bolivarian Venezuela, there will certainly be a headline, an insinuation, an insertion, aimed at distorting the news or sowing confusion. The background is always the same; as a socialist one, the government is necessarily a “regime” ruled not by a president, but by a dictator, so any news coming from there must be considered false, regardless of any logic.

One concrete example, among many concerns, comes from the data on the coronavirus. Despite published catastrophic forecasts of an alleged “humanitarian crisis” in Venezuela, the Bolivarian country turned out to be the most effective in preventing and, therefore, containing the pandemic in all of Latin America and the Caribbean. To date, there are 10 deaths, compared to more than 10,000 in Bolsonaro’s Brazil.

This result was obtained by making testing available and free of charge, using the organization of the United Socialist Party of Venezuela (PSUV) for territorial and regional medicine, rigorously protecting both the health of the essential workers and those who had to stop working because of the virus, exactly the opposite of what is happening in the capitalist countries, hostages of the corporations and the “market”.

However, in a comment coming from a major Italian newspaper about Venezuela being ranked ninth in the world for its effectiveness against the coronavirus, doubt must be insinuated, even if the data was produced by the World Health Organization, which praised the Venezuelan model. And what about the thousands of Venezuelans who are returning to Venezuela from all those capitalist countries? Not a word.

When news can’t be manipulated, it’s hidden. The context is always the same: since Western bourgeois democracy is the only system that guarantees “pluralism and freedom of expression” while participatory and protagonist democracy, governed by the popular power organized in its party that supports the Venezuelan institution, is not valid.

That in 21 years of the Bolivarian revolution there have been 25 elections, two of which were won by the same opposition that today does not recognize electoral authority, does not matter. It does not matter that all the numerous parties of diverse tendencies represented in the Venezuelan political spectrum are running in these elections. What matters to the capitalist countries led by the United States is to recognize a handful of Venezuelan coup leaders whom no one has elected.

These simple considerations would be enough to frame what is actually happening now in Venezuela — which is a new destabilizing attempt led by the United States and implemented by the gangs of the self-proclaimed “interim president” of Venezuela, Juan Guaidó, a scammer who stole precious resources from the Venezuelan people at this time of pandemic which the government could have used, as it does annually with more than 70% of its income going to social plans.

Guaido is a paid US contractor, but one that has the support of all those governments interested in ending socialism in all its forms. He represents rhetoric more useful than ever in the face of the failure of the capitalist model being evidenced in the calamity caused by the coronavirus. Therefore, even after the attack by sea organized by North American contractors and frustrated by the organized popular power in Venezuela, the mainstream media have insinuated that it was a set-up by the Bolivarian government.

We have heard that refrain for more than twenty years with every new attempt at destabilization. Here again, in addition to the confessions of the arrested mercenaries, a simple consideration would be worthwhile, for example, if it was all an invention, why would the US Secretary of State, Mike Pompeo, have so quickly felt it was necessary to declare that the US administration will try to bring the two contractors home “by any means”?

During this recent mercenary invasion, bankrolled by the United States, called Operation Gideon, that was attempted by sea but neutralized by Bolivarian forces, the president of the National Constituent Assembly, Diosdado Cabello, decided to make a special episode of his very popular program “Con el Mazo Dando”, which anyone can watch on youtube.

On that occasion, he offered a journalistic scoop and a historical retrospective of the organized attacks against the Bolivarian revolution in recent years. Everyone can see it on the two central pages of the Cuatro F.

By revealing the contents of a flash drive found on a captured mercenary, Diosdado explained what the coup leaders had in mind if they won. A transition board would be created headed by former general Raul Isaias Baduel, once an ally of Hugo Chavez, turned fanatical opponent, now in detention. His son Adolfo was arrested during the sea attack and has already publicly confessed and turned over the names of the directors and participants. It was Juan Guaidó, the self-proclaimed “interim president” who hired and then defrauded the mercenaries who were supposed to complete the operation. Other former deserters, such as Brigadier General Héctor Armando Hernández Da Costa, Lieutenant Colonel Igbert Marín Chaparro and Antonio José Sequea Torres, also allegedly formed part of the scheme, which contained many other names, details “and even a list of promotions.”

It would have been the culmination of the “mantra” recited by Guaidó since his self-proclamation in January 2019: “the end of the usurpation and transitional government.” A project that, in spite of repeated failures, had received new support during his last trip to Europe and the United States.

Then one of the protagonists of Operation Gideon appeared, Jordan Goudreau, head of the private security firm Silvercorp, based in Florida, and supported by Trump. It was the determination of the Venezuelan people to remain free and independent that rejected this latest invasion attempt, which has gone down in history as the “battle of the bridges”, but it certainly has not stopped the attempted destabilizations.

Trump later reiterated that, “all options were still on the table.” Diosdado summarizes how Trump’s puppets have tried to apply those options, at home and abroad. President Maduro reported that there have been 47 plots directed against the Bolivarian Air Force, in addition to the sabotage of the electrical grid carried out on March 7, 2019.

But before that, on April 30, Guaidó and his sidekick Leopoldo López had attempted a coup d’état, that was again defeated. On that occasion, the old coup leaders who had already been active in the Chavez era reappeared, such as the Popular Will and Justice First re-emerged, as well as the same arc of forces that had organized the violent “guarimbas” of 2017, which ended only after the proclamation of the National Constituent Assembly.

These are characters who have reappeared during these years, during which the Bolivarian revolution was put to the test of “hybrid war” unleashed by the United States and supported by its vassals in Latin America and Europe. From 2016 to date, Diosdado has counted and illustrated 14 destabilizing attempts involving CIA agents, along with Colombian, Israeli and recently Brazilian paramilitaries.

On August 4, 2018, a remote-controlled drone attack was supposed to kill President Maduro during a public event, which would have caused a massacre of military and civilians. It was thwarted, just as this last attempt was, by the civil-military union and popular intelligence, which made it possible to avoid the worst. Always the same pattern. To pull the strings, always the same puppeteers.

Diosdado returned to the stages of Operation Gideon, which Mario Silva later resumed with other details in the broadcast “La Hojilla”. He explained that the investigation began with an arsenal of weapons found in Colombia. According to former defector general Cliver Alcalá, they were part of a shipment bought by self-proclaimed “interim president” Juan Guaidó to overthrow Maduro.

Alcalá, who was living legally in Colombia thanks to his high-level relations with the U.S. administration, fearing that he would be killed, had made statements on video, before turning himself in to U.S. DEA officials, expressing great bewilderment at having been included on Trump’s list of “sanctioned drug traffickers”.

Using the military deserters who had already organized the coup aborted on April 30, 2019, Operation Gideon planned several attacks against the national territory and Bolivarian institutions, first against the headquarters of the security and police forces, then to the prisons to free other detained coup leaders, in addition to selective assassinations of pro-Chávez leaders and the capture of the president in order to collect the reward that Trump put on his head.

One problem that plan had was that the Venezuelan territory is not a Hollywood set, but a country that has decided to defend its independence, based on Bolivarian socialism. To welcome them, the contractors did not find the crowds eager to free themselves from the “dictatorship,” or soldiers ready to genuflect in front of the star-spangled flag. Instead, they found the strong determination of the Chuao fishermen, who surrounded them barefoot but with guns in hand.

“Work, health, guns,” President Maduro said on May 1, inviting the working class to keep their weapons at hand, for the integral defense of the nation. There are 4 million militiamen and women in the country, driven, Diosdado repeats, not for material interests, but with collective ideals, for the defense of peace with social justice.

A determination, that pushes revolutionaries to go all the way, assuming their responsibilities. On the other hand, the confrontation with imperialism has no half measures. During the Fourth Republic, during the democracies born out of the Puntofijo Pact that the United States and Europe loved so much, the guerrillas were tortured and disappeared.

But they were not crying as the relatives of the coup leaders are now, whose human rights will be respected by the Bolivarian government. If there is an armed confrontation, this also will have consequences. In the video published during President Maduro’s international press conference, an official asks a question of the recently captured US mercenary Denman.

“From citizen to soldier,” he asks him how he would like it if a group of armed Venezuelan military went to his country to kill the president. And he answers: “I wouldn’t. I would consider it an act of war.”

In this case, a colonial attack organized for money by a powerful and cowardly army that, after the coup it received in Vietnam, which threw it out definitively on April 30, 1975, no longer dared to invade a territory for fear of getting bogged down there.

More “comfortable” to launch drones from above or send in mercenaries. For this reason, at the suggestion of Chavista leader Roy Daza, there is now a new version of the anti-fascist song Bella Ciao. In honor of the fishermen-militiamen who captured the contractors, it is sung “Bella Chuao”.