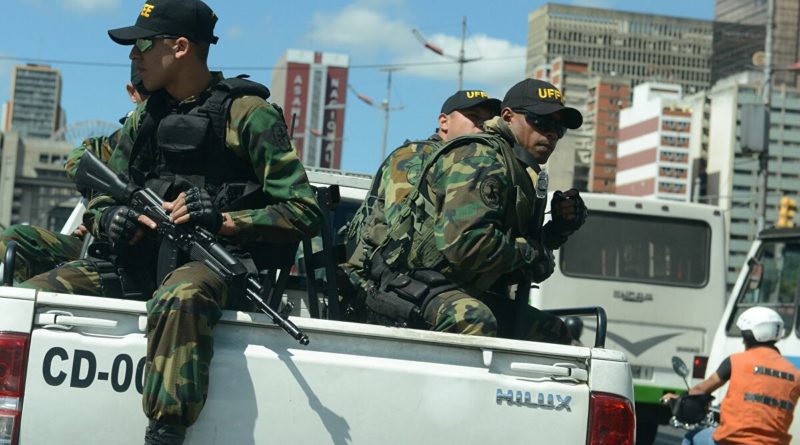 The request for US military intervention was Twitter’s number one trend in Venezuela. It coincided with the days of Operation Gideon. This trend was not spontaneous, but created by an artificial mechanism that few know and it represents a threat.

Is it possible that the request for a foreign military intervention in Venezuela be a trending topic on Twitter? This question was asked by Julián Macías, a network specialist, when he observed that in Venezuela the tag # VenezuelaConfíaEnTrump had positioned itself as number one on May 7.

The messages within the hashtag not only showed an endorsement of the President of the United States, Donald Trump, but also showed images of the US Army, calling for direct military intervention and the murder of the Venezuelan President, Nicolás Maduro.

Macías, based in Spain, responsible for the Telegram Pandemia Digital channel, analyzed the hashtag and discovered that the accounts that had created the trend used false names and profile images and had the ability to send 30 tweets in 10 seconds.

“They are accounts with some features, such as the automation of tweets, launching several per second, which obviously is not possible in any other way than through automation software,” explains Macías in dialogue with Sputnik. This software is allegedly not allowed by Twitter.

Other features of those accounts is their monitoring system, called “follow unfollow”, prohibited by Twitter rules, according to the specialist. “It consists in following a number of accounts and those that do not return the follow-back are no longer followed, in such a way these accounts accumulate many followers and usually have a number of followers very similar to that of those followed,” he adds.

How to build a trend
Trends on Twitter, known as trending topics, are the most popular topics on the platform in real time: when clicking on a trend, what people tweet about it appears. They vary according to the countries, the hours, and show the issues that most people are discussing at the moment, such as a pandemic, a soccer game, or an event around a personality.

Behind the trending topic there is an algorithm, “complex and secret”, explains Macías. But the main elements for a topic to be a trend “are the number of tweets per unit of time; if there is a large concentration of tweets with a [same] word or tag (hashtag) in a given time, then a trend is created.”

This means that an organization in the framework of political action, for example, can artificially create a trend: it needs to achieve a large number of tweets in a short time. How to do it? Creating a series of fake accounts, that is, they do not correspond to any real user and are managed by a program. There may be hundreds of accounts that send a few tweets, or fewer accounts with a message posting ability that no one can achieve, such as several in a single second.

Thus, what at first glance seems spontaneous, like a hashtag, may actually be the product of a political operation. This is what happened with # VenezuelaConfíaEnTrump, something that happened at a key moment in Venezuela.

Operation Gideon and trends
The hashtag # VenezuelaConfíaEnTrump was positioned on May 7, five days after the start of Operation Gideon, when a group of mercenaries, former Venezuelan military personnel and employees of a US military contractor arrived on Venezuela’s coasts. By that day, many of those who had arrived had already been arrested by the Venezuelan government.

The objective of the hashtag was to position an idea that drives the coup sector of the Venezuelan opposition: the need for the United States to intervene militarily in the country, particularly in the face of the neutralization of Operation Gideon.

Such operations on Twitter are frequent in Venezuela by the right. Three days later, for example, on May 10, two hashtags were positioned among the top ones: # MañanaQueSePrendaElPeo and # 11MVenezuelaArmaElPeo, that is, announcing and calling people to protest, to carry out guarimbas (as escalations of violent anti-Chavista actions are known).

In that case, another phenomenon happened that Macías analyzed: the appearance of the @WilexisPetare account that went from 500 followers to 20,000 in 24 hours, according to Macías. Wilexis is the name of the person who runs an armed gang in Petare, one of the largest popular neighborhoods in Venezuela.

In Petare, precisely, [events] took place during the days before and after the disembarking of mercenaries, which were presented by the opposition media as a series of armed confrontations between gangs. However, President Maduro explained that investigations concluded that it was not a matter of real confrontations, but rather a diversionary action so that the State security forces were focused there while the mercenary boats arrived on the coasts.

Among those who starred in the news on networks was Wilexis, who suddenly became a “thug-tweeter” calling for protests against Maduro. Analyzing the @WilexisPetare account, Macías discovered that it was a fake account.

“The origin of the account is very close to the accounts that # VenezuelaConfíaEnTrump spread. It is curious that a gang leader has time to campaign, go from 500 followers to more than 20,000 in a single day, and start acting like a automated account, posting a lot of tweets and being the one that had the most tweets and retweets in the two hashtags,” he says.

Finally, whoever had the false account revealed that it was not Wilexis and concluded: “There are only two exits, military intervention or a revolt from a sector of the military force.” For Macías, the plan went wrong:

“It went wrong because what he wanted was to mobilize demonstrations against Maduro, but they had no resonance, so the artificiality of the networks; that you are able to be the number one trending topic for a protest and then, no one goes …”

What impact does an artificial trend have?
How is the impact of an artificially created trend measured? It depends on the objectives of the operation. One may be trying to function as a convenor, trigger, for example, of protests or “caserolazos”. In this case, it often happens that the distance between the hundreds of automated messages and the streets is great.

In some cases the connection turns out and the trend can amplify or oversize the facts. But not everything seeks to translate itself into protest actions. The construction of messages as political operations is part of a much larger media operation that seeks to install ideas, build meaning, ways of seeing others, influence voting or behaviors.

“All this is synergistic, Twitter is the tip of an iceberg of a much more global disinformation system in which other platforms that can be more visible participate, such as YouTube, Facebook, and different media, both digital and written paper, radio and television.”

Twitter has, within this set, a characteristic, which is “a kind of loudspeaker for the media, the media usually look at the Twitter accounts of other media such as political leaders or actual news, that is what jumps faster into the media.”

In the case of Venezuela, the use of Twitter and the creation of trends has been central in recent years. Its tendencies are mostly political, unlike other countries. Each escalation of the right wing coup was accompanied by a large display on social networks, in particular on Twitter.

Although this dynamic has been particularly marked in Venezuela, it has not been exclusive. During the coup d’état in Bolivia in October-November 2019, nearly 68 thousand Twitter accounts were created to legitimize the overthrow of President Evo Morales.

Macías points to an “international connection”, where “many think tanks have participated to unify this new far-right movement (…) and are creating a very strong international media apparatus.” The network specialist points out Donald Trump among these forces; the Brazilian president, Jair Bolsonaro – with the massive use of WhatsApp in his electoral campaign in 2018 -; British Prime Minister Boris Johnson; VOX (Spain) – which mobilized to defend the coup in Bolivia -, among others.

“Almost all of the global technocracy, the technology elite has a lot to do with the current government of the United States and they are applying a very effective system based on the diffusion of hoaxes and hate generation,” he explains.

That has its translation in each country, with common mechanisms. In the case of Venezuela, he had, among his recent demonstrations, those Twitter trends that sought to provide support for the flow of actions to overthrow the government. The danger posed by these operations is global, warns Macías:

“It is an international threat to democracy. The first step is to diagnose and denounce, but I see a lot of impunity, both by international institutions and by the digital platforms themselves.”