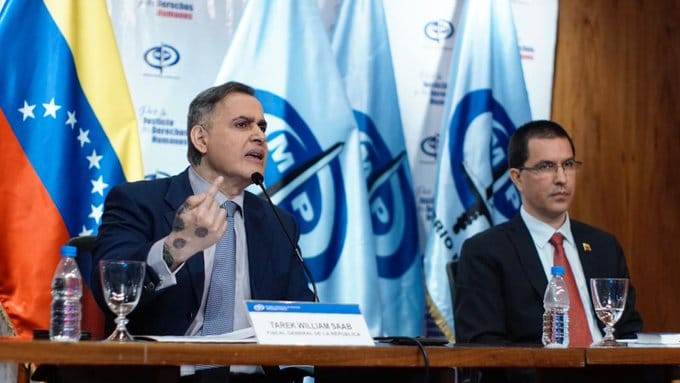 This Saturday, Venezuelan Attorney General, Tarek William Saab, detailed the actions of the Public Ministry, on behalf of the Venezuelan State, to defend human rights, “not like in Colombia, where they mocked the peace accords and demobilized ex-combatants are being killed.”

During a press conference, he stated that since his arrival at the Public Ministry, 565 State security officials identified as allegedly responsible for human rights violations and 31 civilians implicated as collaborators have been charged, for a total of 596 legal actions.

He mentioned that 143 of them belonged to the Scientific, Criminal and Criminal Investigations Corps (CICPC) and 138 to the Bolivarian National Police (PNB).

Saab also highlighted that a total of 447 officials from different organizations and 21 individuals were apprehended, for a total of 468 deprived of liberty, 109 of them belonged to the Bolivarian National Police.

He added that 804 officials and 123 civilians have been accused, “which makes a total of 927 accused through the presentation of 375 filed charges by specialized prosecutors on the matter.”

Regarding the infamous report presented by an «ad hoc» commission financed by the Lima Group, he stressed that it, “is a lack of respect for the prosecutors who study and go hand in hand with the law to go to court in order to achieve the results that I am showing.”

The Attorney General stressed that the charges filed referred to crimes of homicide, torture, cruel treatment, inhuman and / or degrading treatment, illegitimate deprivation of liberty, violations of the home, and other crimes contemplated in the law.

The Prosecutor explained that in addition, a total of 127 state security officials and 13 civilians were punished by a conviction, for a total of 140 convicted; being 36 from the Bolivarian National Police and 26 from the GNB.

On the other hand, he highlighted that a total of 3,246 technical inspections were made at the scene of the events, in conjunction with the auxiliary criminal investigation bodies, and a total of 11,102 autopsies were performed. “It would be necessary to know how many field [investigations] the creators of this report carried out. None, because they were never in the field.”

Finally, the prosecutor noted that since he took charge of the Public Ministry in August 2017, he has rendered public accounts for all its actions, and that includes institutional actions to clarify cases involving human right violations made by police or military officials.