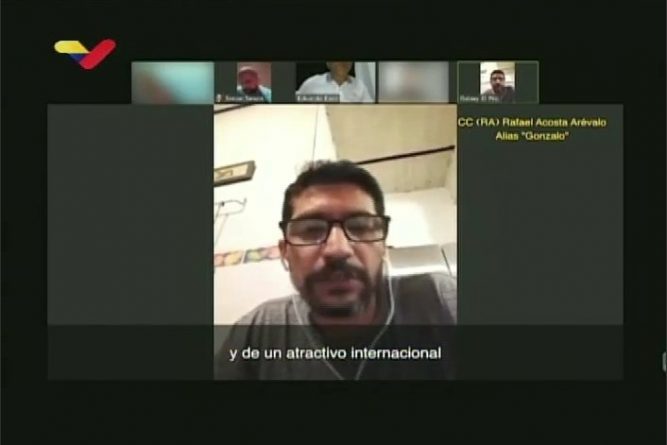 Acosta had been linked to an alleged coup plot in which he discussed assassinating President Nicolas Maduro.

Caracas, June 30, 2019 (venezuelanalysis.com) – Venezuelan President Nicolas Maduro has ordered a probe into the death of a retired navy captain in the custody of Venezuelan intelligence officials on Saturday.

According to a statement by Venezuela’s Defense Ministry, Acosta was presented before a military judge at Caracas’ Fort Tiuna military base on Friday when he reportedly fainted, prompting the judge to order his immediate transfer to the health facility. No further details have been made public at the time of writing.

However, the opposition has disputed the official account, claiming that the navy officer died as a result of torture.

Venezuelan Attorney Tamara Suju, who serves as self-proclaimed “Interim President” Juan Guaido’s envoy to the Czech Republic, took to Twitter, alleging that Acosta “arrived at court in a wheelchair, presenting grave signs of torture.” Her comments were echoed in a statement by Guaido’s office calling for an “independent international forensics team” to investigate the death.

Acosta, who retired from active service a decade ago, was arrested by Venezuela’s Military Counter-Intelligence Command (DGCIM) on Wednesday on charges of terrorism and sedition, in connection to a purported coup plot revealed by Communications Minister Jorge Rodriguez that same day.

Rodriguez presented an allegedly intercepted video conference showing Acosta extensively discussing the coup plans with other alleged conspirators, which included seizing arms stored at the Central Bank before mounting an assault on Miraflores Palace in order to “eliminate target 1 and target 2,” referring to President Maduro and National Assembly President Diosdado Cabello. The retired navy captain described the assassination of the president and the Socialist Party’s number two as a “decisive, striking, mediatized and internationally noteworthy act” that would win over military officials still ambivalent about the coup.

In a statement Saturday, Venezuela’s Communications Ministry indicated President Maduro ordered a “thorough and exhaustive investigation” into the incident.

For its part, the Attorney General’s office likewise issued a declaration announcing that the 86th Caracas Metropolitan Area prosecutor, with a specialty in human rights, had been assigned to conduct an “independent, objective, and impartial” probe into the death.

In response to the incident, US Assistant Secretary of State for Western Hemisphere Affairs Kimberly Breier took to Twitter Sunday, condemning the death as “a grim reminder of how Maduro & his Cuban advisers are persecuting the military & National Assembly.”

Meanwhile, the EU’s spokesperson for foreign affairs, Maja Kocijancic, termed the case “a stark illustration of the arbitrary nature of the judicial system in the country” and called for a “full and independent investigation.”

[UPDATE] On Monday afternoon, Attorney General Tarek William Saab announced that two DGCIM officers, National Guard Lieutenant Ascanio Tarascio and Second Sergeant Estiben Zarate, had been arrested in connection with Acosta’s death. Saab further added that the two had been charged with manslaughter, and that the attorney general’s office would seek an “exemplary” punishment.