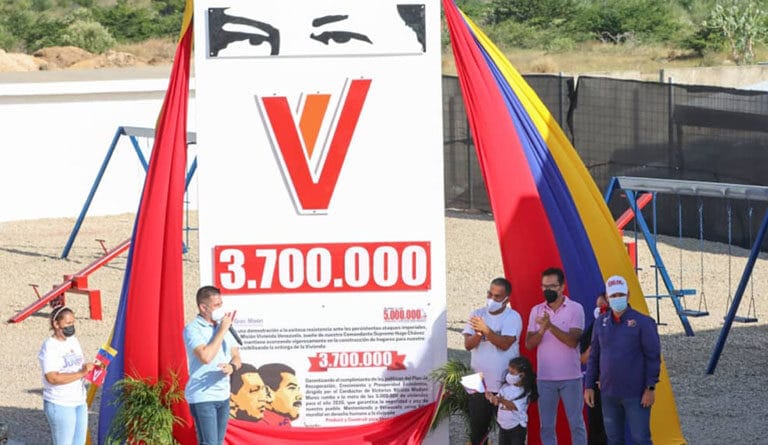 On Friday, October 1, the Great Venezuela Housing Mission (GMVV) celebrated the milestone of 3,700,000 homes constructed and awarded to Venezuelan families, 10 years after the founding of the project in April 2011.

This landmark event was presided over by President Nicolás Maduro, who granted the key to the house and the property title to Yudeisy Moreno, a member of the Miranda Fire Department, and her partner José Gregorio Barrio, who live in the Tomás Lander municipality, in Miranda state. Accompanied by PSUV first combatant and First Lady Cilia Flores, and Governor of Miranda, Héctor Rodríguez, at the event, President Maduro declared that “the most important aspect of the Great Housing Mission is to build families and communities.”

The president informed that the building projects have been carried out by Portuguese company Ledna. Each housing tower consists of 4 floors, each floor with 4 apartments. “These apartments were built by us, with materials and labor of our own country, and by agreement with Portugal,” he said. “The payment was done in [cryptocurrency] Petros.”

President Maduro stated that, despite the sanctions, the financial persecution, the blockade and the coercive measures imposed on Venezuela, 300,000 homes have been built this year and delivered to Venezuelan families, something that would not be possible in a capitalist and rent-orientated society. “This very apartment and all the buildings of the Housing Mission, is being paid for by the State in Petros,” he explained. “We grant property titles to the beneficiaries and then they can pay for their homes in bolívars through their Patria Card in easy installments.”

“The Great Venezuela Housing Mission has been a miracle for Venezuelans,” he added.

The milestone ceremony was also attended by Minister of Housing, Ildemaro Villarroel.

Minister Villarroel stressed that vulnerable families were being prioritized to receive welfare benefits. For this purpose, the Patria System platform has been a fundamental tool to provide greater efficiency when registering the needs of the people, he added. “For example, in this case, 120 homes were detected based on an evaluation of the number of families and the family members in vulnerable situations, as well as the waiting period that the family had already endured,” he explained, referring to the houses delivered in Lomas de la Guadalupe. “All these factors are evaluated when it comes to home allocation.”

RELATED CONTENT: The Media Myth of ‘Once Prosperous’ and Democratic Venezuela Before Chávez

Quality of life for the people of Miranda
Héctor Rodríguez Castro, governor of Miranda state, thanked President Maduro for his effort to continue the Great Venezuela Housing Mission project in building of homes for Venezuelan families, in the midst of the blockade and the COVID-19 pandemic.

Rodríguez asserted that in Miranda, government efforts are improving the quality of life of all its inhabitants. He declared that, despite the sabotage recently perpetrated by the right wing at the Cacica Apacuana Gas Filling and Distribution Plant, the gas service is being recovered and distribution time is being improved.

Entrepreneurs’ fair
President Maduro asked Minister Villarroel to create a registry of artisans, carpenters and entrepreneurs who would produce all the furniture with which the GMVV homes would be equipped, as part of an effort to boost the national and local economy and to support small and medium entrepreneurs in the country.

GMVV materializes Chávez’s “Live by living”
Since its creation in April 2011, GMVV has become one of the most important social projects that the revolutionary government materialized under the leadership of Commander Hugo Chávez Frías, due to his sense of social protection for Venezuelan families. At the time of the inauguration of GMVV, the supreme leader of the Bolivarian Revolution had declared that “today the Great Venezuela Housing Mission is born, to make Venezuela a great home where we can all fit with dignity.”

With the ideology of propitiating the maximum possible happiness and recovering the Venezuelan people’s right to live with dignity, which was neglected by the governments of the Fourth Republic, the GMVV under President Maduro’s leadership has been expanded in capacities, strengthened in adversities. Neither the criminal coercive measures, nor guarimbas, nor blockades, nor unsuccessful coup attempts, nor the pandemic, have managed to put an end to the work and the efforts of the Bolivarian government, so that every year, hundreds of families are benefited with a decent, dignified and secure roof above their heads, fulfilling, in this way, Chávez’s dream to “live by living.”

Featured image: More than 300,000 homes have been delivered to Venezuelan families in 2021 under the Great Venezuela Housing Mission. Photo: Últimas Noticias