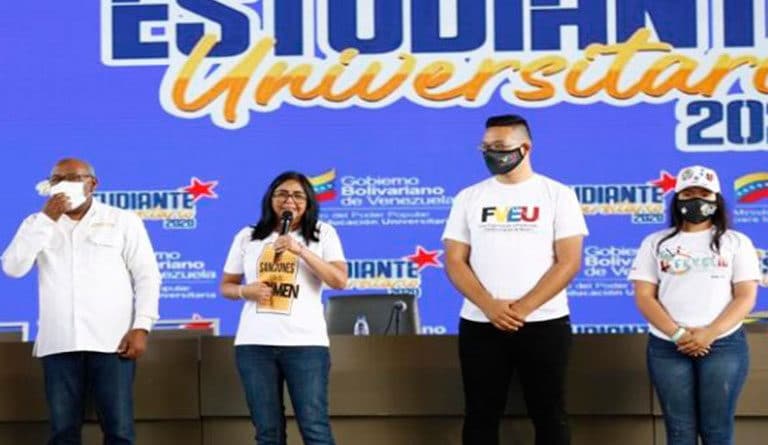 Venezuelan Vice President, Delcy Rodríguez, reiterated this Saturday that on December 6, we Venezuelans have the opportunity to rescue the Venezuelan Parliament.

In a ceremony on the occasion of the University Student Day, Rodríguez said that “we are in the middle of a historic electoral campaign in our country and in the world.”

In this sense, given the possibility that the electoral results are not recognized by the United States and Europe, she stressed “we do not care, we are indifferent because we exist much better without you, we do not care because it is the people who have to speak.”

“The United States and Europe believe that they are the ones who give life to an electoral result,” she said, highlighting the impact of illegal US sanctions, which are a crime and “that is why we have brought the government of Donald Trump to the International Criminal Court, for what the blockade against our people and against you young students has meant.”

In this sense, she referred to Juan Guaidó project, the greatest failure in Donald Trump’s foreign policy.

“Trump lost the elections thanks to Juan Guaidó, and as soon as he lost, he (Guaido) went to congratulate Biden,” she commented, assuring that the main failure of the extreme right is “the contempt it has for the people.”

“They stole the patrimony of the Venezuelans, CITGO, Monómeros, the financial resources of our country, and here we are standing with the missions and great social missions at the fore, giving a titanic battle,” said the vice president.

Rodríguez pointed out that “Venezuela is the only country in the world that contains in its constitutional framework a state of protagonist participation of the people, guarantor of the rights and within them the political rights of the people,” which -she said- “is an issue that in international spaces is not liked.”

“Our model of inclusion and equity is a model of justice, the model that Venezuelans deserve.”

She also referred to the Venezuelan electoral system, which she described as “the best in the world,” and in this context she commented on what is currently happening in the United States, where more than fifteen days after the presidential elections the result is still unknown. In addition, not everyone can exercise the vote, and the candidate with the most votes does not necessarily win,” as happened with Trump (in his first election).”

“It is a decadent system, dominated by industrial, financial and media mafias.”

She also said that the empire does not understand how the Venezuelan people continue to stand, fighting and winning with gallantry and giving examples to the world.

Rodriguez thanked all the medical and nursing students who took to the streets to provide care to the people, in a comprehensive deployment conducting house-to-house tests and taking all Covid-19 positive patients to health care centers.

RELATED CONTENT: The Imperialists Fear the Next Global Wave of Socialist Revolutions

“All positive patients for covid-19 have been treated free of charge. “Despite the blockades, sanctions and thefts from our main assets abroad. We have obtained the medicines to serve the people. Which is not shown by the international media and their governments. ”

“In the face of the pandemic, the world quarantine itself and its governments hid, but Venezuela together with its youth has given the heroic battle in the face of all the adversities of recent times.”

The vice president pointed out that it was Commander Hugo Chávez who made youth visible in a constitutional way. “This is how it is in our 1999 constitution, which says that the people are the ones to decide their future.”

She indicated that when Commander Chávez came to power, he did so for the inclusion, justice, equity and equality of all Venezuelan people. “At that time, the first thing he said was that the people should be given political power and this is reflected in the mother Constitution of 1999, which contemplates that the people are the decision-makers of their future.”

She added that if the revolutionary model is compared with puntofijismo (political era before Chavez), a significant difference is seen in the quality of life of each of the Venezuelans, for which she pointed out that only in social investment, from Venezuela we can give an example of what Venezuelans are made off, actions they never did in the Fourth Republic (puntofijismo).

The Bolivarian Government has given a space to the youth to fight for a productive, free and sovereign Venezuela, she argued. “The youth are committed and disciplined and located on the right side of history, and they must continue that way even though participatory and protagonist democracy hurts many,” she said.

During the activity, 10 thousand university students were present through different digital platforms, of which 337 were international guests.