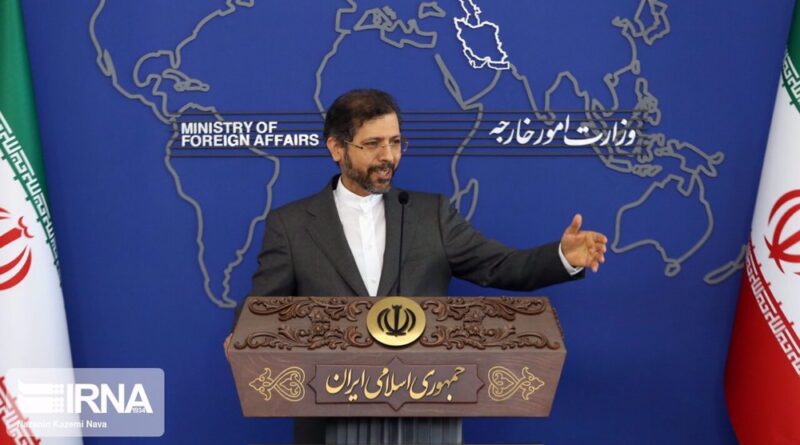 Asia International News
December 9, 2021 Editor2 Ali Bagheri Kani, Enrique Mora, European Union, Iran, JCPOA, nuclear agreement, Saeed Khatibzadeh, Vienna
The spokesman for Iran’s Foreign Ministry has said that while Iran entered talks in Vienna on the revival of the 2015 nuclear deal with an interactive and flexible attitude, “this was not the case for the other side.”

Saeed Khatibzadeh made the remarks at a weekly presser on Monday, adding that the Vienna talks have not been halted and that the next round will kick off later this week.

The seventh round of high-level talks between Iran and the other parties to the nuclear agreement was held in the Austrian capital between Monday and Friday last week, after a five-month hiatus.

High on the agenda of the talks was the removal of US sanctions against Iran that would pave the way for the US return to the Joint Comprehensive Plan of Action (JCPOA), commonly known as the Iran nuclear deal, three years after it unilaterally left the deal and reinstated economic sanctions on Iran.

At the talks, the first under President Ebrahim Raeisi, the Iranian delegation presented two detailed draft texts: one on the removal of US sanctions and the other on Iran’s return to its nuclear commitments under the JCPOA.

The participant JCPOA parties then asked to return to their capitals for further consultations.

Meanwhile, the US, which is not directly involved in the talks, blamed Iran for the pause, threatening once again to pursue “other options” if the talks turn out to be a dead-end.

Tehran slams US blame game, ‘dishonorable’ Bennett
Asked to comment on recent remarks by US Secretary of State Antony Blinken, who claimed that Iran does not seem to be serious in the Vienna talks, Khatibzadeh stated that the US is in no position to make such claims.

A country “that is not a member of the JCPOA, that has stopped all of its commitments, that has made every effort in recent years so that no one remains compliant with the JCPOA, and that has punished those who honored the deal is in no position to make such remarks,” he said.

“The US, rather than playing some sort of a blame game to shirk its responsibility, should return to the easier way and return to its commitments under what they signed in 2015,”

He also railed against Israel, saying the occupying regime opposes any dialog in the region and constantly creates distractions and artificial issues against Iran through international forums.

In remarks on Sunday, Israeli prime minister Naftali Bennett urged the participants in the Vienna talks to “take a strong line” against Iran “and make it clear to Iran that they cannot enrich uranium and negotiate at the same time.”

“Iran must begin to pay a price for its violations,” Bennett insisted.

The Iranian Foreign Ministry spokesman said it is no secret that the Israeli regime has opposed the JCPOA from the very beginning, lamenting the “bitter reality” that Israel itself possesses nuclear warheads and is under no international supervisory regime whatsoever.

He asserted that such statements by Israel are completely baseless, and also “the person who makes them is dishonorable.”

‘No interim deal, no commitments beyond JCPOA’
Elsewhere in his remarks, Khatibzadeh said Tehran is negotiating the removal of all US sanctions at once, dismissing the notion of an “interim” deal or step-by-step plan in the Austrian capital.

He also emphasized that Iran will commit to no new obligations beyond the JCPOA.

According to Khatibzadeh, the opposite side did not object to the two drafts presented by Iran, but rather, they only said they need to review them.

The spokesman stressed that the two proposals are in compliance with the JCPOA and agreements reached in previous rounds of the Vienna talks.

New draft texts and documents can be exchanged whenever necessary, he said, stressing that Iran awaits the other side’s view on its proposed drafts.

Elsewhere in his remarks, Khatibzadeh reiterated the importance of the verification by Iran of the sanctions removal phase, amid the “breaches of promises” by the other side.

He said Western governments seek to commit themselves to as little as they may when it comes to their obligations under the JCPOA.

The spokesman underlined that Iran entered Vienna with a “serious will” to reach “a good agreement” within the framework of the pact, and expressed hope that the opposite side would resume the talks with the same determination.

‘Common language’
Russia’s ambassador to international organizations in Vienna Mikhail Ulyanov stated that the parties participating in the revival talks would reach an agreement if they become patient.

The tone of these comments demonstrates that there is a room for further negotiations, to my mind. As I repeatedly said to all our counterparts at the #ViennaTalks, patience, just patience and we will find common language. Let’s refrain from hasty conclusions. https://t.co/vCCFQQ1dg7

He made the remarks in a tweet in response to an unnamed Iranian Foreign Ministry official, who said Iran’s proposals “are not maximalist” but it is the opposite side that “has a minimalist approach in abiding by [its] commitments” under the JCPOA.

“The tone of these comments demonstrates that there is a room for further negotiations, to my mind,” Ulyanov wrote.

“As I repeatedly said to all our counterparts at the Vienna Talks, patience, just patience and we will find common language. Let’s refrain from hasty conclusions,” he added.